From the outside, the name “bitter melon” seems to have nothing to do with the fruit in question: It doesn’t look like a melon, though it does hail from Cucurbitaceae, the same vine-friendly family that brings us watermelon and cantaloupe. Instead of being round and sweet-fleshed, bitter melon — also known as bitter squash, balsam-pear, karela and goya in various parts of the world — resembles a cucumber (though flavor-wise you would never compare them). For starters, bitter melon proves as sharply flavored as you might think, and with rough, bumpy skin. Just because the fruit looks ugly and has a pungent taste, however, doesn’t mean you should pass on it. After all, folks have been cooking with it for hundreds of years, and with good reason.

Like many odd-looking fruits and vegetables, bitter melon grows best in tropical and subtropical regions like the Caribbean, Africa, Southeast Asia and China (where it’s probably the most widely consumed). And as with many not-so-good-tasting foods, bitter melon was touted for its medicinal properties long before it became an ingredient used for its flavor.

“Bitter melon is very good for you, thanks to compounds called cucurbitacins, which are very bitter,” says Jennifer McLagan, author of Bitter: A Taste of the World’s Most Dangerous Flavor. “It has long been believed that bitter melon has cleansing powers and improves the blood, and others promote it as a cure for diabetes.” She adds, “Research shows that it is good for lowering blood sugar levels and fighting viruses, and a study at the University of Colorado Cancer Center showed that bitter melon juice kills cancer cells.” If those aren’t reasons enough to give this fruit a try, its unique flavor profile should be.

You can usually find this fruit at Asian markets all season long. But if you choose to grow it at home, you will want to harvest it at the end of summer or early in the fall, when temperatures are high and humidity peaks. This is also the time you might see bitter melon at the farmers’ market. Don’t pass it up — grab that long, warty fruit and get ready for a culinary adventure. 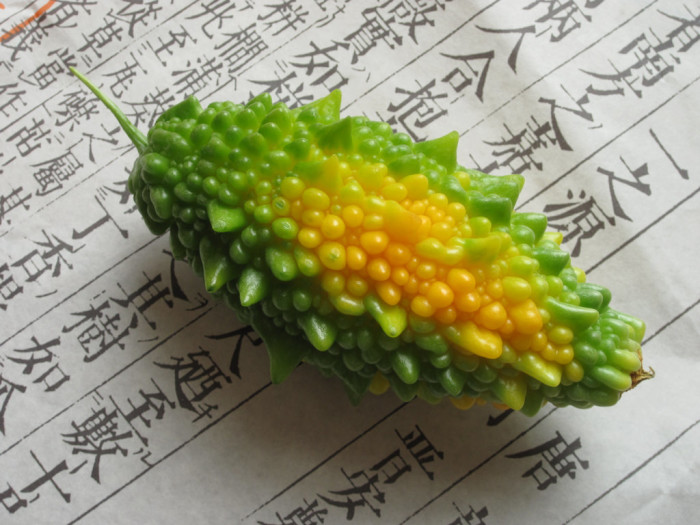 Each oblong fruit grows to about 10 inches (avoid buying any that are bigger than that). You can tell the age of the fruit by the color of the skin. Green fruits are less mature, and if it’s leaning toward yellow and orange, it’s ripe. Normally, cooks work with firmer, unripened fruits. A few variations to keep in mind: Chinese bitter melons look most like a cucumber, albeit pockmarked. Indian bitter melon tends to showcase a darker hue, and the skin folds in ripples around the whole fruit. When shopping for it, McLagan recommends “small to medium-size melons, making sure they are firm. With bitter melon, bigger is not better, just more bitter.”

As you would a cucumber, keep bitter melon in the fridge in a vegetable drawer.

Unless you get a small, young bitter melon (recommended), avoid eating the thick, waxy skin. Instead, peel the fruit to get to the flesh beneath. The taste of the meat is quite astringent due to the high levels of quinine, the same ingredient that makes the tonic part of your G and Ts. But it’s this bitter quality that makes the fruit so beloved by those in the culinary world.

“I love its bitterness so much so that I find myself craving it,” says McLagan, who highlights it in her book and shares a recipe for bitter melon with coconut milk and tofu. “There are lots of way of using bitter melon — it can be steamed or pan-fried like zucchini, and some cooks leave it whole and hollow it out to stuff, like a squash. Its bitterness makes it a perfect match for chilies and fat, and I like it best simply cooked with other vegetables, or in a spicy curry.”

One of the cuisines that bitter melon is most prevalent in is Chinese food. “Most commonly bitter melon is stir-fried or used in soups,” says Tommy Lee, chef-owner of Hop Alley and Uncle in Denver. “Like most bitter foods in Chinese culture, it’s believed to aid in digestion and improve overall health,” he adds.

But how do you go about dissecting this strange-looking ingredient? First, says Lee, “Split it in half, dig the seeds out with a spoon and slice into half moons. Or it can also be stuffed by cutting into thick rounds and coring. Either way, it’s best to toss the bitter melon in some salt and let it sit for 30 to 45 minutes to help draw out some of the bitterness and excess liquid.” The last part is key, an important step Lee’s father, who was raised in Hong Kong, taught the chef. “He grew up eating it and would cook it for our family when we were kids.” One well-known Chinese dish Lee likes is stir-fried bitter melon with Chinese black beans and shrimp or beef. “As with most bitter foods, a salty component, like Chinese black beans, helps balance the bitterness.” Other tips Lee has for working with bitter melon include blanching the produce after its saltwater soak before adding it to the pan and letting it cook for just a couple minutes so it maintains its pleasing crunch.