Being very lactose intolerant deprives me of certain pleasures in life, specifically cheese and ice cream. I’ve found ways to reconcile my separation from cheese, namely some stellar vegan options and the occasional real cheese bender borne out of desperation. Ice cream, however, has become a nemesis. Mimicking the indulgent, creamy goodness of real dairy ice cream is nearly impossible. Milk is special, and ice cream is an exemplary demonstration of that uniqueness.

Creating a passable nondairy ice cream is a formidable challenge, primarily because the fat content of whole milk or heavy cream is what creates the rich, uniformly smooth and creamy texture of the best ice creams. Reduced or nonexistent milk fat will create an ice cream that feels thin and can be challenging to emulsify properly. Most milk in the U.S. is also homogenized, meaning the fat particles are evenly distributed throughout the other liquids. As you introduce air while mixing the ice cream base, the fat clusters break apart further but hold the air pockets in place. Stable air pockets make for a fluffier final product despite the density of the fat. Fat and water want to separate, so homogenization addresses this problem before you’ve even pulled out the ice cream maker. Moreover, fat means flavor. So not only does dairy fat keep the ice cream base uniform and fluffy, but without it, you’ll have an ice cream that tastes like slurry water instead of a sweet indulgence.

The most successful strategies for making a truly dairy-free alternative foremost require replacing the fat source. Early versions of nondairy ice cream simply injected extra lactase, the enzyme that breaks down the lactose sugars in dairy, into the base. But let’s be honest, that’s cheating and only avoids the problem instead of solving it. For those with lactose allergies, not just sensitivities, or those adhering to vegan diets, lactase-addled ice creams don’t suffice.

Luckily, alternative diets are stylish (and lucrative), and major brands from Ben & Jerry’s to local artisanal ice cream shops are creating delicious, dairy-free ice creams that are luxurious and delightful in their own right. To do so, they are using high-protein, high-fat replacements for traditional dairy milk.

For a proper evaluation, I sampled the various types of alternative ice creams now on the market — examining each on the basis of texture, taste and overall ice cream–likeness. Here is a breakdown of how each kind stacks up against the real thing:

Nuts are very rich in natural, oily fats and are a common alternative to dairy. In fact, nuts are often used for vegan cheese spreads that emulate goat cheese, so using them as a stand-in for dairy is not new. Because of the fats, cashews and almonds in particular become creamy when mashed and can easily be made into milk. However, unlike dairy, nut milks can easily separate into their liquid and solid components. Since the super-fresh versions (like what you can make at home) are not homogenized, getting thick and fluffy ice cream can be challenging.

Coconut cream comes closest to replicating milk’s natural properties: High in fat, its thick viscosity is similar to heavy cream. However, coconut cream can have an unpleasant aftertaste if not balanced correctly in the recipe. It can also be syrupy, which will affect the final texture and inhibit light, airy ice cream. It does emulsify nicely (with patience) and will result in an ice cream that is creamy and holds together when scooped, like traditional dairy treats. “We obsessively source the best ingredients in the world to create each flavor and make not just incredible ‘vegan ice cream’ but incredible ice cream, period,” as Van Leeuwen cofounder Laura O’Neill told Edible Brooklyn.

Soy milk was the original alt-milk before nut milks blossomed in popularity. oy milk is naturally fat-free, so it’s not the best option for use in ice cream. It also has a cloying flavor profile that can be difficult to mask. However, for those allergic to nuts and/or coconut, there are a few good brands out there. Look for options with caramel or chocolate swirls, which help cut through soy’s off-putting flavor — and hey, chocolate and caramel! 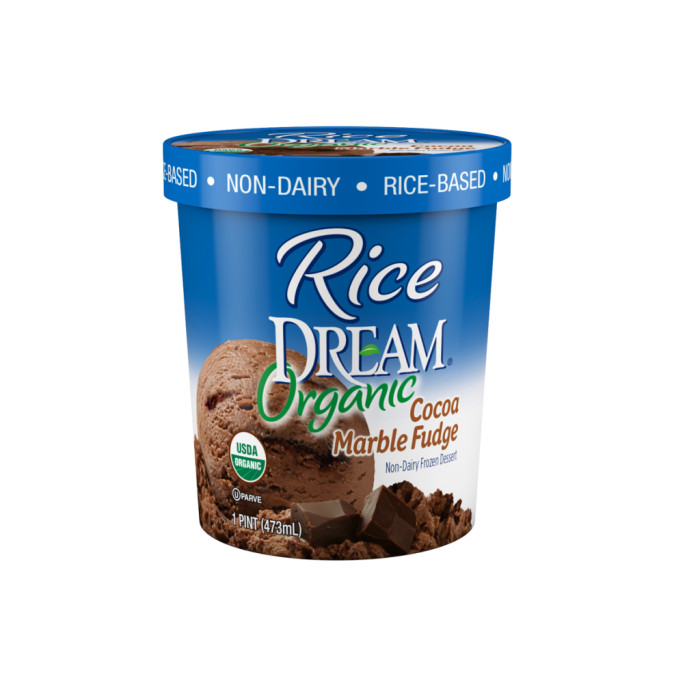 Although the final product is a grain, rice begins as a tall grass. I’m not sure how or why grasses became a viable source for alternative milks, but hemp and rice milk are available for those looking to avoid nuts and soy. Unfortunately, they really make the worst ice creams. Rice and hemp have no fat and the resulting milk is watery, making for ice cream that feels more like frozen, micro-shards of ice that break apart when scooped.

A note on additives

Most nondairy ice creams call for cocoa butter and guar gum, a thickening agent made from guar beans that encourages emulsification and prevents ice crystals from forming. Since nondairy milk usually has a high water content, guar gum is important. It’s also very expensive — due in part to a complicated causal chain stemming from wealthy hydro-fracking companies that require obscene amounts of guar gum to run their wells, which drives up the cost of the average pint. Most importantly, however, it is harmless and plant-based, and therefore completely dairy-free.

After copious amounts of testing (and an uninvited four pounds later), it is clear that the best ice creams are those that don’t rely on a single type of milk. Using both olive oil and butter is always better when sautéing (flavor and browning), so presumably the same logic applies here. Combinations of cashew milk and coconut cream create ice creams that are texturally rich, maintain integrity for scooping, and are not at all funky in flavor. In fact, cashew and almond milks are a lovely foil against richer caramels, hints of cinnamon, walnuts and chocolate pieces.

I’ve learned I prefer my ice creams like I do my bourbons — small-batch and tragically expensive. Steve’s and Van Leeuwen, both made in Brooklyn, use high-quality ingredients and aren’t afraid to test more adventurous recipes with sophisticated add-ins. The wildflower honey/pistachio and mint chip ice creams, respectively, are divine in their own right, and in my opinion, that’s the truest assessment of any dairy-free product. It should be delicious of its own accord and not as a stipulated replacement for the original. If you have to make excuses for it, you shouldn’t be eating it.