Alternatives to meat burgers are plentiful today, from portobello mushrooms to black bean and grain-based, hockey puck–like veggie patties. But none of them truly taste as great as the beef burger. This is where plant-based protein burgers step in.

Carbon footprints are a large reason for these meatless patties sprouting up everywhere. Plants can’t burp methane gas like cows do, nor do they require as much land and water to grow. The two leaders in the plant-based-protein burger business are Beyond Meat and Impossible Foods. Both market their patties as the perfect alternative that smells, feels, looks and, most importantly, tastes like meat without all the environmental guilt. This leads us to wonder if the days of the black bean veggie burger are numbered.

Impossible Foods’ patty consists of things like coconut, honeydew and other plants. It has been monetarily supported by Bill Gates. This patty has yet to reach the mass market.

As for Beyond Meat, its Beyond Burger is marketed as the plant-based patty that bleeds (it’s okay, it’s just beet juice), and it does indeed spew “blood” when pressed. It’s made primarily of pea protein, a beef and dairy alternative that has been making headlines, and doesn’t sport the fake char marks that so many veggie patties do.

Here is the full ingredient list for the Beyond Burger patty: 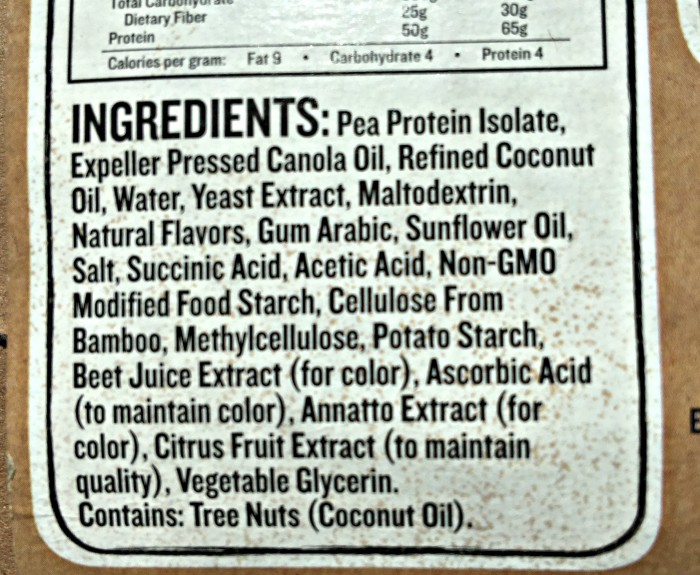 Last week, representatives from Beyond Meat made a pit stop at the Food Republic headquarters, where our editors delved into the bleeding, meatless burger. The texture resembled beef burgers like no other plant-based burger we’ve ever had (some of us are more than familiar with an array of veggie burgers), and we were impressed with its meat-like flavor. At least at first. What stuck with us most, however, was the lingering mushroom-y aftertaste. One editor says, “No amount of culinary turpentine could remove the aftertaste for hours after eating half a burger. It was like a messed-up ghost was haunting my tongue.”

Consumers are certainly curious to try the things. The first Beyond Burger released at a Whole Foods in Boulder, Colorado, sold out within an hour. The company also plans to expand to stores nationwide with placements in both meat and meat-alternative aisles.

If we as a human race end up grilling vegetable blends of burgers and milking peas, will that make the cow obsolete? Not at all. If our office taste-test is any indication, plant-based burgers aren’t the perfect replacement for good old-fashioned beef — at least not yet. Perhaps burgers grown from stem cells could help on that front.