Corn smut, fungus, Mexican truffle — these are just some of the aliases of huitlacoche (pronounced whee-tla-KOH-cheh). But what exactly is this soft, spreadable and dark-as-night ingredient? In simple terms, it’s a plant disease that grows on ears of corn around the kernels in puffy, gray clouds that look kind of like river stones. But when you take this strange fungus into the culinary world, huitlacoche becomes a delicacy used in all sorts of dishes from soups to enchiladas to sauces.

The name huitlacoche is Nahuatl, which is the language of the Aztecs still spoken by more than a million people in Central Mexico today. Utilizing this ingredient also dates back to this time. Corn, or maize, was a staple in the Aztecs’ diet, and they used the corn fungus mainly in tamales and stews.

The Native American Hopi and Zuni tribes have also worked with huitlacoche from the get-go. The former called the fungus “nanha,” and the latter held the ingredient in such high standing they say it symbolized the “generation of life.” In fact, huitlacoche has been an important food for indigenous peoples of the Southwest for centuries. So much so that the fungus has ceremonial, culinary and medicinal uses. As far as the healthfulness aspect is concerned, huitlacoche offers more protein than regular corn and has high amounts of lysine, an essential amino acid not found in normal kernels.

Of course, not everyone is okay with plant-ruining diseases creeping in on their crops. Many farmers outside of Mexico destroy infected plants, and new strains of corn have been modified that prove resilient to the fungus. Luckily, with the influx of culinary awareness, huitlacoche has become a bit of delicacy in the States. The semi-popularity of the ingredient came about thanks to Josefina Howard, founder and the first chef-owner of Rosa Mexicano in New York. She served a huitlacoche-focused dinner at the James Beard House in 1989 that went over so well, others started thinking about the food. It’s still served at Rosa Mexicano restaurants, as well as many other, mainly Mexican eateries.

As you may suspect, huitlacoche follows the corn season. But instead of harvesting it when the ears are ripe and ready, you get it whenever you see it, which usually happens around the rainy months. This gives the fungus a window of seasonality between May and November. 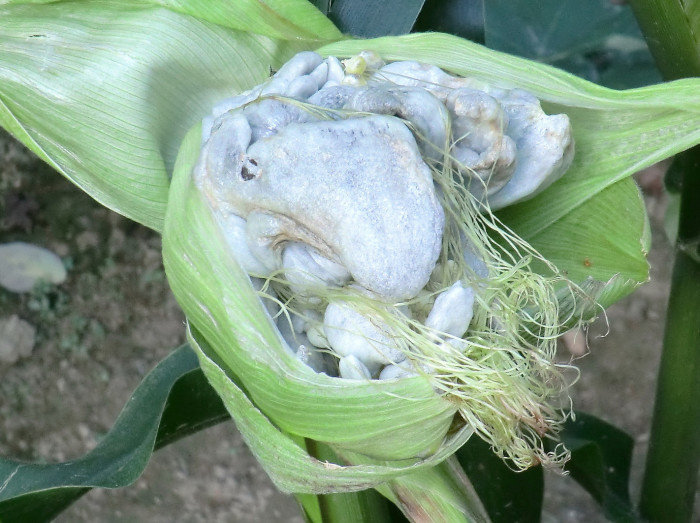 Huitlacoche can be bought at most Mexican food specialty stores and comes frozen, jarred or canned. Since you don’t have to strip the corn of the fungus, using huitlacoche in this way proves pretty easy and requires little to no prep. If you do happen upon it fresh, pick the spores when they are light gray in color on the outside and have a spongy texture. Firm samples are overripe and bitter. For a superior earthy-corn taste, go for huitlacoche that forms on the ears, not the stalk. Occasionally, you may find this ideal huitlacoche at a farmers’ market or a Mexican grocery.

Fresh huitlacoche can be stored in the fridge just as you would store mushrooms. However, the stuff doesn’t have a long shelf life, so if you get it right from the ear, use it as soon as possible. Canned, frozen and jarred obviously last longer; once you open a can or jar you can keep it in the fridge and use it for weeks. 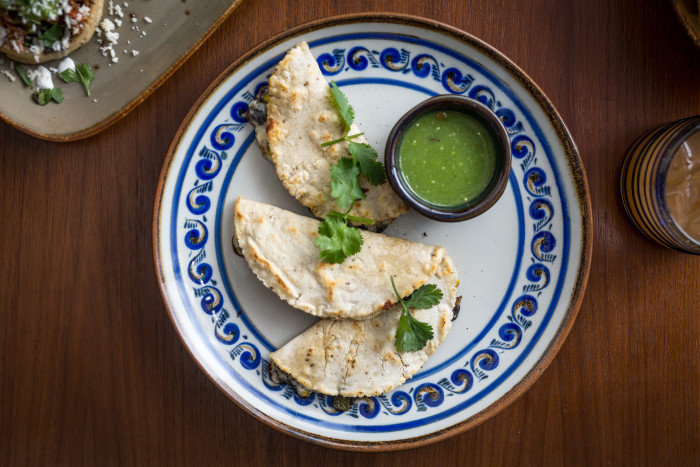 Using huitlacoche in the kitchen is far easier than saying the name. Since it’s technically a vegetable, you can use it raw. And because it’s a soft fungus, you don’t have to worry about chopping, pureeing or shredding, especially if you get it in a can or frozen. If you do manage to source some fresh huitlacoche, first thank the corn gods, then throw it into dishes whole, or delicately tear it apart with your fingers. Don’t be surprised when the gray fungus turns black with heat — this is a signature characteristic of the ingredient and the reason why many dishes that contain huitlacoche have a dark hue.

At the Rosa Mexicana chain, executive regional chef Joe Quintana says the ingredient goes with so many things, you will have no trouble finding a way to play with it: “Huitlacoche has many uses, and its earthy flavor gives you options to put it into dishes as well as sauces.” At the restaurants, he has paired it with chicken, beef and, surprise, more corn! He also says it goes brilliantly with cheese, especially in quesadillas. In a way, you can think of pairing huitlacoche with items that you would normally add mushrooms to, and beyond. “Most typically we sautée and incorporate huitlacoche into sauces or dishes for its earthy flavor,” says Quintana. “It can be puréed with cream to make a delicious sauce for steak, and we have even made huitlacoche flan for more of a savory twist on dessert.”

Next time you find yourself with a can of the stuff, spoon some onto freshly poached eggs or dollop it into a quesadilla. It will give your dinner guests something to talk about and help spread the magic of this corn fungus.