Did we have some epic meals this year, or what? Remember that 10-hour, 40-course Italian feast in South Philly? As the new year approaches, we’ve asked some of our writers to list their top dining experiences along the Northeast corridor in 2015. Here are their picks: 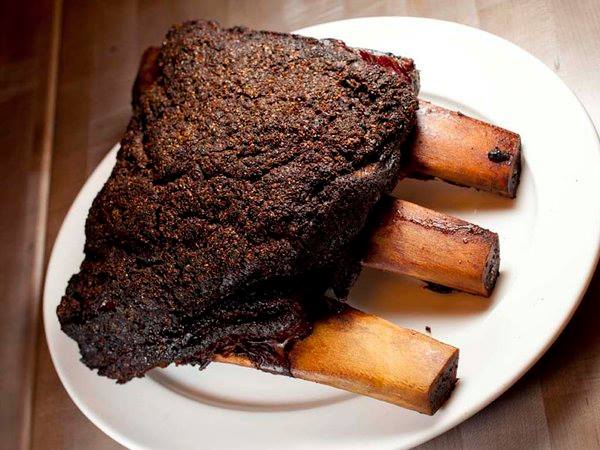 Abe Fisher (Philadelphia, Pennsylvania)
Food-wise, Philadelphia may have evolved more than any other American city over the past several years, and chef Michael Solomonov has been at the forefront of the movement. His past successes include the groundbreaking Zahav and crowd favorite Federal Donuts, but it’s his latest hit, the Jewish diaspora–influenced Abe Fisher, that firmly won my heart — and my taste buds. It’s nearly impossible to dine at a small-plates restaurant and come away genuinely impressed by every single dish on the menu, yet that’s exactly what went down over a meal there earlier this month. And our group tried roughly three-quarters of the menu. From chopped liver with pastrami-onion jam to pickled mackerel with Old Bay and onion rings to veal schnitzel tacos to foie gras torchon in a peanut butter and jelly sauce, each course is as unique in its composition as its flavor. Make sure to bring a large-enough group to order the Chinatown-style Hungarian duck featuring three different preparations of duck and the Montreal short ribs, a colossal whole short-rib served with four types of mustard that will forever change the way you think about smoked meat. 1623 Sansom St., Philadelphia, PA 19103; 215-867-0088; abefisherphilly.com
—George Embiricos

Shuko (New York City)
Look at any list of New York City’s “hottest” restaurants, and you’d be hard-pressed to find any Japanese — let alone omakase — establishments making the cut; it’s not typically that kind of star-studded affair. Nick Kim and Jimmy Lau’s second city venture has flipped the script, with A-list celebrities and investment-banker types jostling exactly one month in advance for a spot at the 20-seat, U-shaped counter (request to sit here and not at one of the two tables off to the side). The Union Square sushi bar has just two options: a $175 kaiseki menu with both cooked dishes and sushi and a $135 sushi-only offering. Spring for the former to enjoy toro and Osetra caviar alongside homemade milk bread, and prepare to have your preconceived notions of “spicy tuna roll” changed forever, thanks to red Thai chilies. Just be sure to save room for the chefs’ valiant take on traditional apple pie. 47 E. 12th St., New York, NY 10003; 212-228-6088; shukonyc.com
—George Embiricos

Mi Cuba Café (Washington, D.C.)
Ask Washingtonians to name their favorite Cuban café, and many will struggle for an answer, largely because such restaurants are as rare as pro-gun Democrats. Even Yelp can’t spit back a full page of recommendations for “best Cuban food” in Washington without devolving into Dominican and South American options. Not to fret: The only place you need to know is Mi Cuba Café, an arty hole in the wall located in the Columbia Heights neighborhood. Owners Jacqueline Castro-Lopez and Ariel Valladares are Havana natives who carefully weigh every decision at their establishment, whether the artwork on the walls (courtesy of Jacqueline’s mother) or the bread for their excellent line of sandwiches (a Maryland shop custom bakes the good-and-chewy Cuban loaves). The kitchen even dotes on the rice, which can be so mouthwatering you’ll vacuum up all the grains before touching your entrée. 1424 Park Rd. NW, Washington, DC 20010; 202-813-3489; micubacafe.com
—Tim Carman

Contra (New York City)
This year, I had two meals at Contra, a restaurant on Manhattan’s Lower East Side where young chefs Jeremiah Stone and Fabian von Hause offer an insanely creative tasting menu, and both times I was wowed by the cerebral but simple nature of the food. The first meal had a theme of bitterness expertly woven throughout the dishes, and the second was when they hosted chef Bertrand Grebault from Septime with natural wines brought in by an importer called Selection Massale. It was ethereal. What this restaurant is doing is so special, and it’s incredibly well priced given the quality of food and service. 138 Orchard St., New York, NY 10002; 212-466 4633; contranyc.com
—Rachel Signer

The Chicken House (Wilmington, Delaware)
Commonly known (or unknown) for its bland reputation, Delaware isn’t the first or even tenth place that comes to mind when thinking standout regional dining, but incongruously located on a stretch of Wilmington road is the Chicken House, a truly stellar Peruvian restaurant. Housed in what appears to be a former Wendy’s, frothy pisco sours come topped with a stipple of Angostura bitters, portions of ceviche arrive with purple onion slivers and crunch kernels of oversized corn, and lomo saltado is finished with plenty of soy sauce giving the dish its unique Chinese-Peruvian chifa flavors. 1504 Philadelphia Pike, Wilmington, DE 19809; thechickenhouserestaurant.com
—Caroline Russock

Her Name Is Han (New York City)
As in the previous year, Korean food in New York had a pretty strong 2015, with the continued success of fan favorite Kang Ho Dong Baekjeong, as well as strong reviews for Oiji and White Tiger. Take 31, which quietly opened this summer on a dusty section of 31st Street, has not really been latched onto by the press. Though you wouldn’t know it from walking by on most nights, when young Korean professionals punching away on Kakao will be waiting more than an hour for a table. Han, the Her in this restaurant’s quirky name, is not really a her, but the proverbial mother of Korea. Her runs the kitchen here, which feeds a set of New Yorkers homesick for the soups and stews of Jeonju and beyond. It’s homestyle cooking, with dishes like bindaetteok (golden-fried mung bean pancakes) and kalbi jjim, short ribs slow braised with soy sauce and Asian pears and apples. Yangnyeom gejang is basically a messy plate of crabs that have been marinated alive in soy sauce, spices and their own wonderful juices. If you are Korean, it very well could remind you of home. If you are not Korean, order it and be reminded how incredible Korean food is outside grilled meat and tacos. That’s so last year. 17 E. 31st St., New York, NY 10016; hernameishan.com
—Matt Rodbard

GG’s (New York City)
You know how every New Yorker has his or her “spot”? You know, the kind of place they go to on a chill Monday night, to celebrate an occasion, or for no good reason other than to eat well, not go broke, and feel like some people there might actually like them? Well, GG’s is my spot, and has been since my first visit on February 20. (I was so blown away by the food and service that I wrote chef Bobby Hellen and beverage director Gabe Richter a gushing thank-you note.) Bobby’s thick, saucy, and cheesy grandma pie is my go-to order and the one food that makes me really miss home when I’m on the road. My ideal night there involves sitting at the bar, splitting a grandma with a loved one, having a few glasses of red, then capping the meal with the chef and one of his fernet-tequila shots. 511 E. 5th St., New York, NY 10009; 212-687-3641; ggsnyc.com
—Katie Chang

Dante & Luigi’s (Philadelphia, Pennsylvania)
When it comes to judging the cred of old-school red sauce joints, there are plenty of criteria to choose from. Lasagna, Chianti and career waiters aside, this 117-year-old South Philly restaurant wins for two reasons. The first, which has more to do with omertà than orecchiette, involves a Halloween eve shooting back in 1989 — no joke, the gunman pulled his piece out of a trick-or-treat bag. Second is the perciatelli genovese, an over-the-top rich take on bolognese that adds ground veal and more than a little cream to the mix. 762 S. 10th St., Philadelphia, PA 19147; danteandluigis.com
—Caroline Russock

Fatburger (Atlantic City, New Jersey)
While we might not have the holy grail of fast-food burgers on the Eastern Seaboard (looking at you, In-N-Out), it’s worth a mention that there is an outpost of a beloved West Coast burger chain situated in a most unlikely locale. Head down the escalator to the basement food court of the Borgata Hotel and Casino and you’ll find the one and only East Coast outpost of Fatburger right in the middle of Atlantic City. It could be the cheese on the bottom double-patty burger, the finely diced onions and pickles, or the fact that this particular location is open 24 hours a day every day of the year, but there’s something about this straight-out-of-L.A. burger that tastes even better in AC. One Borgata Way, Atlantic City, NJ 08401; theborgata.com
—Caroline Russock