Who knew that “grandma” could be so in fashion? I’m referring, of course, to the grandma pizza. Or grandma pie, as it appears on the menu at GG’s in New York City’s East Village. If, that is, you even bother to look. “It’s the one thing that people order as soon as they sit down, and they don’t even look at the menu — they order it before they order drinks,” says executive chef Bobby Hellen.

Indeed, Hellen’s signature six-slice pie, liberally dotted with little pepperonis and flagged with fresh basil, has become quite the sensation since the restaurant opened last fall. The Village Voice raved about the sauce, colorfully describing it as “more herb-stocked than a Colorado dispensary.” (Hellen grows many of the ingredients in the restaurant’s garden out back.) Eater, meanwhile, has gone into exhaustive detail in outlining the chef’s intensive pizza-making process.

But while Hellen’s grandma pie is perhaps the most prominent of its kind at the moment, it is far from the only example of this increasingly popular, yet relatively new style of pizza. From old-school joints like J & V Pizzeria in Bensonhurst to newer spots like Best Pizza in Williamsburg, grandma is flourishing on menus across the city — and beyond. Once considered a strictly New York phenomenon, the style is beginning to transcend its regional trappings. Writing in Pizza Today, California-based pizza maker Tony Gemignani, who serves his own version of the grandma at Slice House in Rohnert Park, recently recounted his first encounter with a grandma pizza in Italy, at a place run by a Staten Island ex-pat who wanted to bring this new style to the old world.

What is a grandma pie? The name itself is a nod to simple home-style preparation: baked in a pan, without the benefit of a pizza stone or some other fancy implement. “That’s what Italian grandmothers would make at home, the pizza of the house, the pizza à la Nonna,” says noted NYC pizza expert Scott Wiener of Scott’s Pizza Tours.

As for what specifically defines a grandma pie, well, that depends who you ask. It’s a question that various media outlets, ranging from Bon Appétit to Forbes, have recently tried to explain, and their answers haven’t always synced up. Unlike Neapolitan pizza, there is no official definition or set of agreed-upon standards to distinguish an authentic grandma from its imitators. But there are some common themes.

The most common identifier is its shape. The grandma is generally a square pie. Sort of like a Sicilian. And yet sort of not. The crust is usually different, just not always so different. As Hellen describes it, the traditional Sicilian that you get at your typical corner slice shop has a much thicker crust – “almost like focaccia,” he says.  Comparatively, the grandma, or GG’s version, anyway, is “not an enormously thick, doughy, chewy thing,” he notes. Then again, it’s not really that thin, either.

Some aficionados, like Wiener, suggest that proof time is the major difference. Under this definition, the dough is stretched in a pan and then immediately topped and baked; allowing the dough to rise for any significant time would make it Sicilian. Hellen disagrees. His version is proofed and prebaked prior to order, then baked again and served. “I don’t think it’s a true grandma pie if it’s, like, straight, raw dough that’s being cooked and then eaten,” he says.

The order of layering cheese and sauce is another issue. Many grandma-pie makers, like Hellen, add cheese first, then top with sauce. Others opt for the reverse. 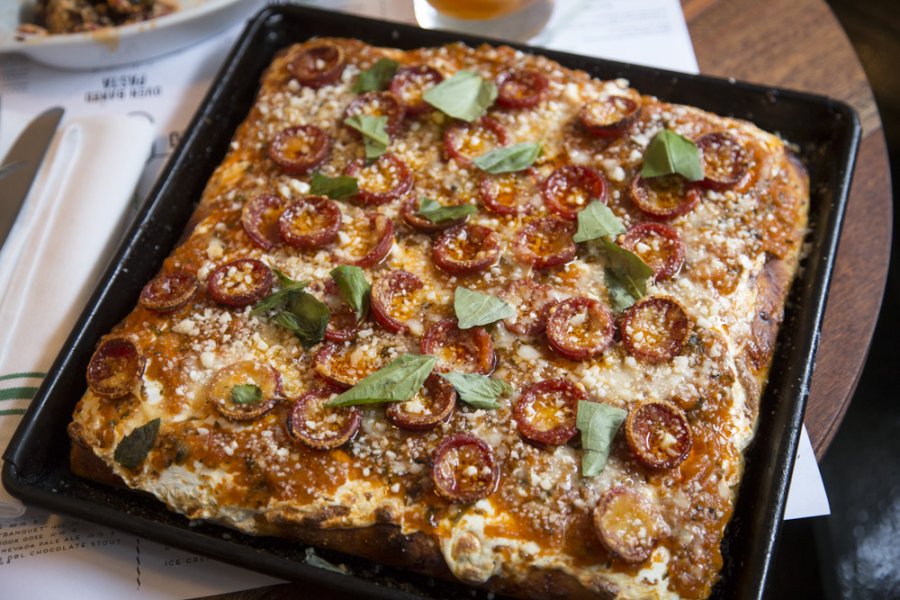 The precise history of the grandma pie is equally fuzzy. It’s believed to have originated on Long Island, possibly as far back as the 1970s, though which location first introduced the style and called it “grandma” is the subject of some debate.

“A bunch of people claim it,” says Wiener, who cites Umberto’s in New Hyde Park, New York, as one such claimant to the grandma legacy.

One reason the origin story is so unclear is the restaurants that first served it originally kept it in the back of the house, away from the public eye. “They would make it just for the employees, for the staff,” Wiener says. “Eventually, they started selling it over the counter. That’s when it became known as the grandma. Then it started bubbling up everywhere.” Although the style may have existed for decades, “you didn’t really see it on menus very much until maybe 10 or 15 years ago,” he notes.

Why the recent surge in popularity? Wiener suggests that it might have something to do with altered perceptions. “When people think of square pizza, they think of thick, bready pies,” he says. “Once they find a square that’s thinner, they’re like, ‘Whoa, I can get on board with that.’”

Kitchen logistics could offer another reason. “You can fit more squares in a pizza oven than you can with circles,” notes Wiener.