Nobody knows the inside of an animal quite like chef and meat enthusiast Chris Cosentino, who helms Cockscomb in San Francisco and restaurants in Portland and Napa. His latest cookbook, Offal Good, is a dense, delicious collection of recipes for his well-known favorite parts — guts, undesirable cuts and of course, skin. Take a deep-dive into the organ that holds the beast together, and find out some of the tastiest ways to prepare them.

Don’t forget to check out our recent interview with Cosentino on our Food Republic Today podcast!

Reprinted with permission from Offal Good

When we think of an animal’s organs from head to tail, it’s easy to forget the fact that skin is the first organ we face. Skin is like the wrapping on a present: You’re happy to see it, because it means there’s something special inside. But once opened, it’s overlooked in lieu of the interior contents.

The largest organ of an animal, skin is what protects an animal from harm and disease. But skin also allows moisture to penetrate, making it the true gateway offal in more ways than one.

Pork skins provide the world with some of the greatest fatty snacks we know, like crackling chicharrones, the crisp-fried snack found in many Latin American cuisines. These vary in how much meat, if any, is still attached, and, with different techniques, crisped skin may shatter like glass or puff up like Rice Krispies. For another take, there’s ciccioli, an Emilia-Romagna dish comprised of scratchings (rinds) and sinew, braised and pressed into a puck-shaped patty. And of course, everyone loves a crisp piece of chicken or duck skin. 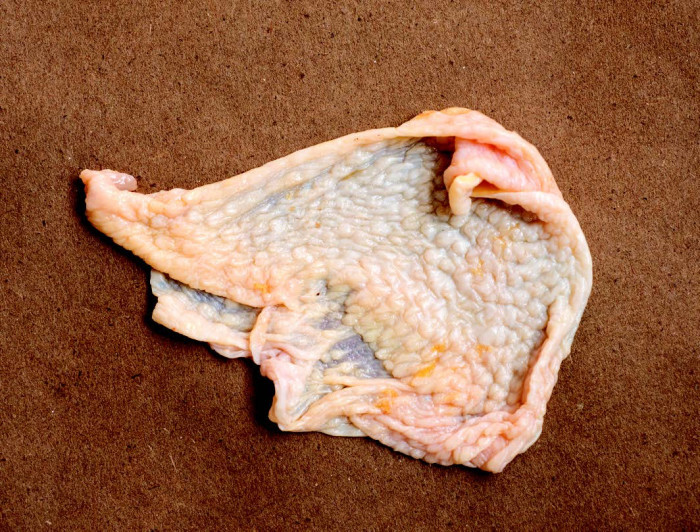 Tattoo artists have been known to practice their skills on pigskin, and, speaking of ink, the USDA inspection stamp you often see stamped onto pigs’ skin is edible, made from natural coloring agents such as annatto, carotene, chlorophyll, saffron and turmeric.

But let’s get back to the meat of it.

In the United States, it’s really unusual to use cowhide for culinary purposes — it’s much more profitable as leather — so you will likely not have access to it. But that doesn’t mean it’s inedible. In Nigeria, for instance, it’s called ponmo, and it’s beloved when stewed until tender. The Nigerian government did try to ban it, not because it’s dangerous to consume, but because they wanted people to tan it and sell it as leather for revenue. Ponmo lovers are fighting back.

When whole pigs are sold, they’ve usually been already dehaired via a scalding, shaving, and scrubbing process. Sometimes, though, I’ll still end up with bristly pig and will have to give it a close shave with a Bic and then blowtorch the follicles as a precaution. No one wants hair in their food. When working with skin, first give it a look to see if there are any stray hairs and get rid of them.

Many muscle cuts, such as ham or butt, are sold skin on. The best example of this is pork belly, which is most commonly used as bacon. Sear or roast these cuts skin-side up, so that it gets crispy and all that lovely subcutaneous fat can render down through the meat.

In recipes where only the skin is used, it’s important to physically remove the subcutaneous fat before cooking it. If you don’t, you’ll be unnecessarily rendering out fat in the cooking process, which takes time and, depending on your cooking method, may end up giving you too much fat in the pan. So try to cut off any easily accessed layers of fat. Then bring a pot of water to a boil, add the skin with a couple tablespoons of salt and vinegar, and drop the temperature to a simmer. This tenderizes the skin and gets rid of some of the funk. The timing depends on what the final product will be and can take two hours or more — consult some of the recipes in this book or elsewhere to get a sense of the proper doneness for different applications.

Once cooked, lay the skins out on sheet trays and flatten them with another weighted tray, then chill the skins in the fridge. Once chilled, you can use a bench scraper or knife to remove any extra white or clear fat left over. Butchers use skinning knives to remove the fat before processing the skin for a terrine or puffing pork rinds. From this prep point, you can crisp them for chicharrones or cracklins, make jellied skins (which are found in many Asian cultures), or even pickle them. For something even crazier, I like to make spaghetti purely out of skin.

I’ve never seen lambskin used in a restaurant, but that doesn’t mean it can’t be. Sheep are shorn for their wool, exposing the skin, which, like cow, is primarily used in fashion. (And contrary to popular belief, lambskin condoms are not actually made from lamb’s skin, but lamb’s intestines, a practice established during the Roman Empire.) If you do get some lambskin, follow the same procedure described above for pig skin. 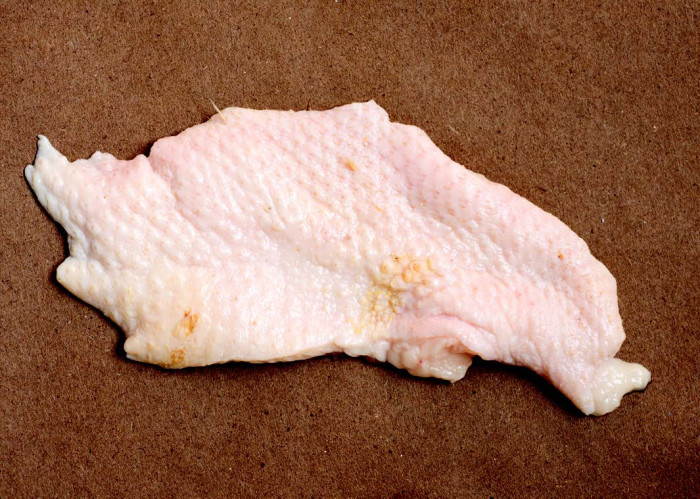 When cooking with chicken, duck, turkey or goose skin, use this process: First, look to make sure there aren’t any quills left in there. If there are, use pin-bone tweezers (usually for deboning fish) to pull them out. There are many ways to skin a chicken — just make a cut somewhere, and start lifting the skin away from the body while trimming it away from any attaching muscle; usually you can do this with just your hands. Once you have the skin in hand, bring a pot of water to a boil with a touch of salt and quickly blanch the skin for a few seconds, which helps remove some of the impurities and makes it easier to work with, then shock it in salted and slightly vinegary ice water to stop it from cooking further. Let the skin chill in the fridge and scrape off the fat, which will be slightly more translucent, using a bench scraper or a dull knife.

In my restaurant kitchen, I’ve found that the cleanest way to render the fat from poultry skin is to do it sous vide. I season the skin with salt and black pepper and then vacuum-pack it with aromatics like bay leaves. I circulate it in water at 185°F (85°C) for 45 minutes, then chill it in an ice-water bath or in the refrigerator to set the skin.

From there, I like to fry them up like chicharrones. Make sure to use a neutral but high–smoke point oil heated to 375°F. Once they’re fried to a golden color, drain them on paper towels, and season with salt. For a perfectly flat and crispy chip, instead of frying the skins, I like to bake them laid flat on a sheet tray and sandwiched by two Silpats.

Gribenes (Yiddish for “scraps”) are a by-product of rendering schmaltz. They’re a lot like cracklings and are great in sandwiches.