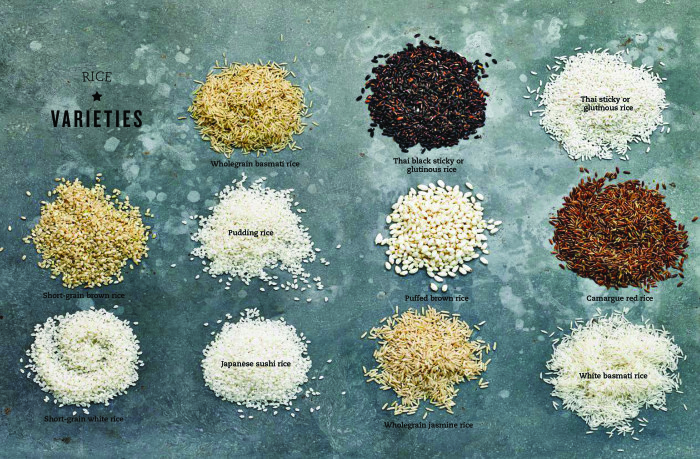 Can’t bring yourself to make the same old pot of rice again? Pick up a copy of Posh Rice, a new cookbook by recipe developer Emily Kidd, and refresh your repertoire with 70 awesome and budget-friendly recipes for this delicious staple enjoyed around the world. First, brush up on your knowledge — learn all the kinds of rice, then share the wealth.

Reprinted with permission from Posh Rice

This isn’t really a specific type of rice, but is white short-grain rice sold under the name ‘pudding rice’. The term is rarely used outside the UK. When cooked with milk or water the rice becomes sticky and creamy. The grains are very absorbent and so a small amount of rice in proportion to liquid is used during cooking.

A medium-to-long-grain rice hailing from South East and East Asia. Glutinous rice does not actually contain gluten, but the name refers to the rice’s glue-like sticky quality, which easily binds it into rice balls and cakes. It’s best soaked in cold water for at least three hours, or overnight if you can, before cooking – steaming is the preferred method.

Black sticky rice is a wholegrain rice (meaning the bran has not been removed), is purplish-black in color and has a chewy texture. Pick up a bag in Asian supermarkets or order online. Like other unmilled rices, it takes longer to cook than white varieties.

The most well-known of risotto rices (also used for making rice puddings), this plump, medium-grain rice from the Northern Italian region of Piedmont has a high starch content, which means it’s wonderfully creamy when cooked. For a risotto it has to be cooked al dente, or with the center of the grains still firm to the bite, otherwise you’re just not doing it justice. If overcooked it becomes stodgy and porridge-like.

A medium-grain Italian rice also used for making risotto and rice puddings. It has a higher starch content and firmer texture than Arborio rice, it is therefore a little more forgiving and keeps its shape better when cooked.

This fragrant, slender long-grain rice is grown in the Himalayan foothills and is considered to be one of the best-quality white rices. It has a distinctive aroma reminiscent of the pandan leaf, and the grains are separate, light and fluffy once cooked. It’s most widely used in Indian, Pakistani and Middle-Eastern cuisines. 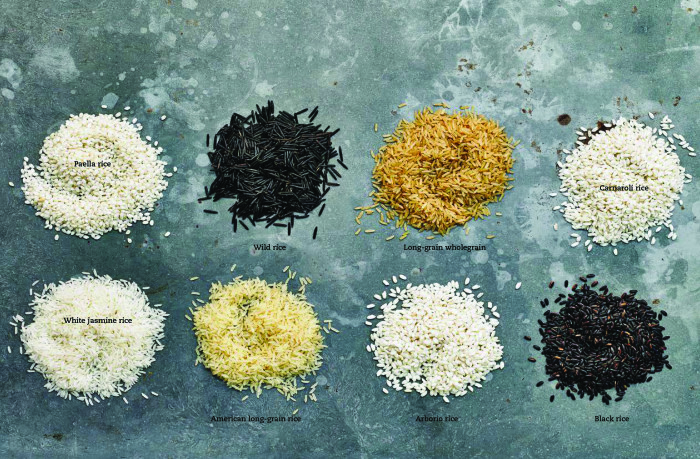 Again, this isn’t actually a rice variety but the name used for types of rice suitable for cooking paella. Spanish bomba or Calasparra rice are the kings of paella rice and amongst the most expensive in Spain. The medium grains are pearl white in color and have the ability to absorb lots of liquid, so really take on the flavor of the cooking stock.

An extremely versatile rice that’s popular throughout the world. The grain is four to five times longer than it is wide. Most varieties are grown in America, and it’s available as regular long-grain or easy-cook (or converted) rice.

This rice has a really nutty flavor and slightly chewy texture. Only the husk is removed during milling so the bran layer remains, making this rice higher in fibre, vitamins and minerals. Because of this, it takes longer to soften and cook than white rice.

Jasmine rice is a long-grain rice, also known as Thai fragrant rice. It doesn’t actually have a jasmine flavour or scent, but it does have a subtle floral aroma when cooked. The aromas dissipate over time, so the new harvest crop is highly sought after. The grains are slightly sticky, so if using for fried rice, it should be cooked, cooled and chilled overnight first.

Still with its bran layer, brown jasmine rice has a delicate floral aroma, slightly oaty taste and firm texture. Like other wholegrain rices, it’s higher in fibre and nutrients than white jasmine rice. Use whenever you’d normally use the white variety, but make sure you cook it for a little longer.

Wild rice is actually the seed of a strain of aquatic grass grown mainly in North America. The grains are long, thin and black or brown in color. It’s a very good source of protein and is high in antioxidants. The grains are nutty and smoky, and have a chewy outer layer and tender inside. They pop open and ‘flower’ when cooked.

Short-grain Japanese rice is a staple of the Japanese diet. There are many varieties, including Koshihikari, Hitomebore and Akitakomachi, but in supermarkets you’ll often find it labelled as sushi rice. When cooked, it becomes sticky and can be easily rolled into balls or shaped into sushi, but it’s also great served as a side.

This rice is so plump it’s almost round. The grains have a high starch content, which means they become sticky once cooked. It can be used for many dishes, including rice pudding, sushi and risotto. It’s a very thirsty rice.

Rich, chewy and nutty, wholegrain short-grain rice takes longer to cook and is less sticky than its white counterpart, but the grains still cling together. It’s higher in nutrients, too.

This rice is grown in the marshes of the Camargue in South West France – there’s even a rice museum there dedicated to the stuff. The outer bran layer of these wholegrains is red, which gives the rice its color. It has a nutty taste and slightly chewy texture.

There are various varieties and names for this medium-grain rice, including forbidden rice, Thai black rice, Nerone black rice and Venere black rice. All are high in fibre and have a mild, nutty taste. The grains are very high in antioxidants, containing as much or more than the levels found in blueberries. The new superfood?

This is simply puffed wholegrain brown rice. It’s light, crispy and good for you. Just don’t get it confused with the white puffed rice packed with sugar, sweeteners and other unknowns.

A note on easy-cook (converted) rice

Many varieties of rice are available as easy-cook rice, but this doesn’t mean the rice takes less time to cook. The name refers to the par-cooking of the rice after harvesting, prior to removing the husk. The effect is that the grains absorb many of the nutrients from the husk and the rice doesn’t stick together or go soggy when you cook it at home.