Unless the names Ruth’s Chris or Outback appear on your CV, cooking steaks is a risky prospect. Investing in a good-quality rib eye from a reputable purveyor is pricey, but then again so are fillets from your closest big-name grocery. And once you get those babies home, getting from butcher paper to plate is a minefield full of potential steak pitfalls.

Most of these pitfalls have to do with the concept of cooking to temperature. Whether you’re grilling or searing on the stovetop, the steak undergoes a seriously scientific-sounding process known as the Maillard reaction where the combination of amino acids and sugars causes the exterior of the meat to brown. That’s what gives it that desirable crust and char, but it also obscures the cooking process, making X-ray vision the only way to know when your steak is cooked properly.

When asked about cooking perfect steaks, seasoned chefs will often share the nose-chin-cheek method. This highly debatable theory says that a well-done steak will feel like the tip of your nose, medium will have the same firmness as your chin and a rare steak will be subtle like the flesh of your cheek. I’m not sure whose visages these guys have been getting their hands on, but there seems to be a highly variable factor in face squishiness.

Other options include instant-read thermometers and the dreaded “cut and peek” process — a surefire way to kill the curb appeal of your steak along with letting out a good portion of its flavorful juices.

Obviously the simple solution to the steak-cooking problem is a smart pan, or rather the Pantelligent, a nonstick pan outfitted with an internal thermometer that connects to a phone app alerting the user to temperatures and appropriate flipping times. According to Pantelligent’s site, “Food + Science = Delish + Fun.” 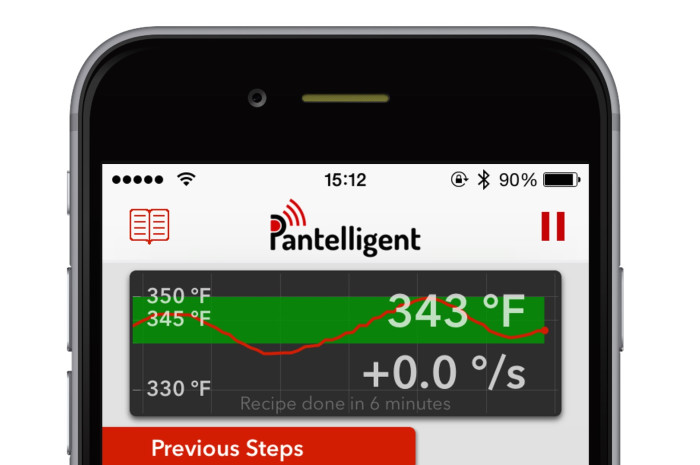 While this is not exactly the Star Trek replicator that sci-fi cooking dreams are made of, it’s a start. And it starts by unboxing the Pantelligent and installing the free app on your phone. Inside the box there’s a Pantelligent-branded apron and a single sheet of paper instructing you to download the manual from the company’s website. With Bluetooth enabled, your phone sends out a homing message to your pan, asking you to hold it close to the handle.

Once connected, the app opens up with a drop-down menu of recipes that includes everything from basics like bacon, eggs and steak to more complex fare like mapo tofu and bhindi masala (Indian okra curry).

When I opened up the recipe interface for steaks, the ingredient list and prep steps were laid out remarkably well. Essentials like coarse salt, freshly ground pepper and equal parts butter and olive oil were on the list. And Pantelligent even reminds you to take the steaks out of the fridge, let them come to temperature and season them completely before setting the pan on the stove. Under the bright red “Things to Remember” header, appropriate resting time is discussed.

Enter in your desired doneness and the thickness of your steak, and it’s time to start cooking.

Once the pan has reached the right temperature (380° in this case), an audio command instructs you to place the steak in the pan. The rest of the cooking process is akin to an overeager mother-in-law breathing down your neck while you’re trying to make dinner, not unlike a less-compassionate Rosie the Robot from The Jetsons.

When the pan is too hot, the screen blinks green, telling you to turn down the heat. When it cools off too much, a sky-blue bar appears and encourages you to up the heat (even when your stove is firing on all cylinders). When the Pantelligent’s perfect temp is obtained, you get a green-lit “marvelous.” 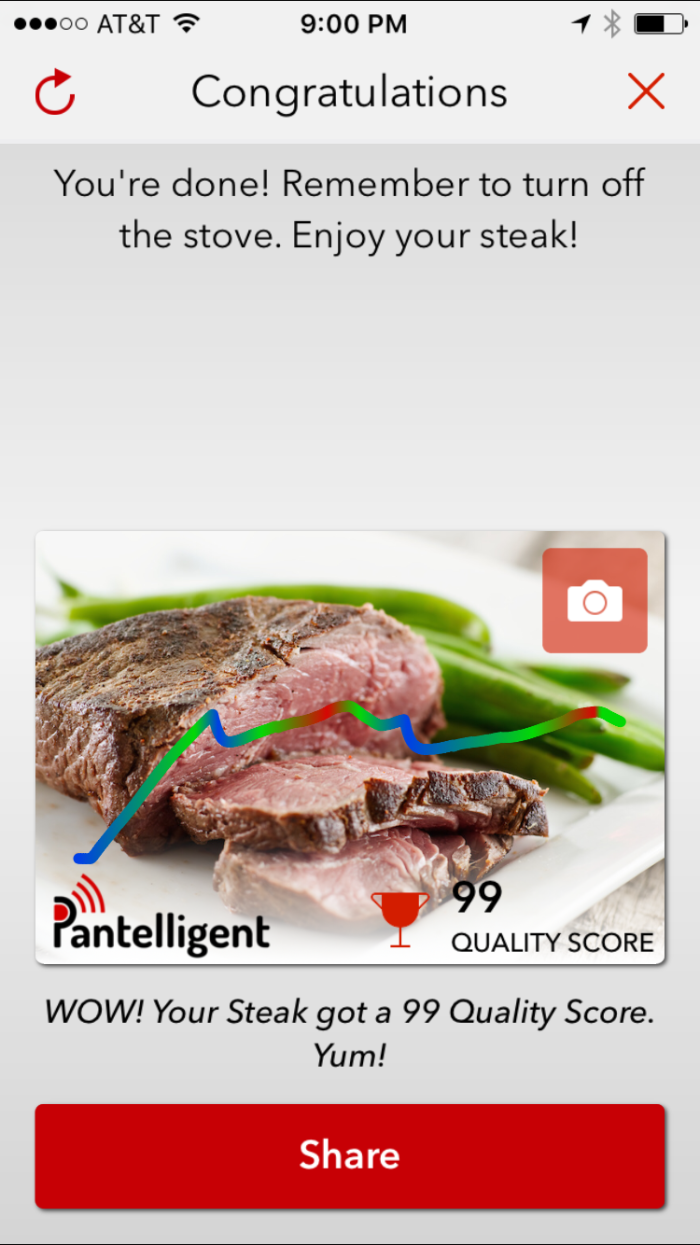 For a one-inch-thick rib eye, the advised cooking time was ten minutes for medium-rare. Five minutes into the cooking process, it was clear that the Pantelligent and I had very different ideas of medium-rare.

Powering through while watching my poor steak die a fiery death was a painful process. After letting it rest for five minutes, as per the recipe, I sliced into it to find that aside from a few whispers of faint rosiness, the crisp-crusted steak was an unappetizing gray through and through. (But my boyfriend did eat it.) 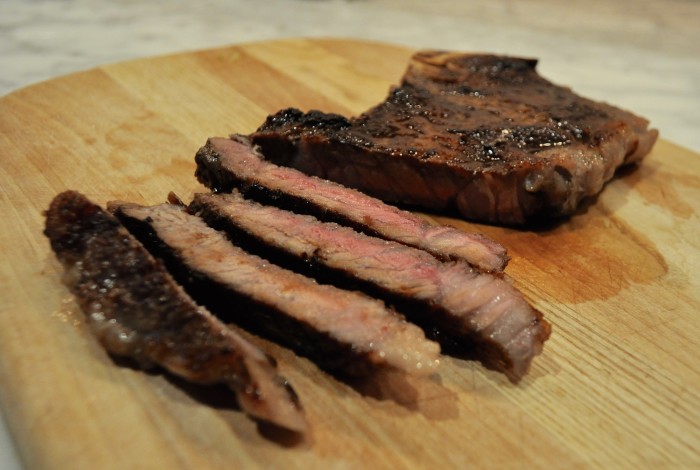 An overcooked steak is a bummer, but the kicker came a few minutes after plating in the form of a message from Pantelligent: “How was your steak? Tell us what you think about the recipe!”

So steak might not be Pantelligent’s forte, but the app comes with a wide range of recipes to explore. Next up: fried eggs.

Selecting “over medium” from a menu of styles, I placed the pan back on the stove for round two. Once the pan reached 330°, I cracked eggs into the pan and left them to sputter and crisp up. Two minutes into the cooking process, my inner egg timer was telling me to flip. Pantelligent, however, had another two minutes on the clock, so I sat back and waited. By that point, the eggs were firmly in the “over hard” zone, with more than another minute remaining. The second-to-last instruction read: “When serving the eggs, flip them back over (it’s prettier that way).” Sadly, due to high temperature combined with extended cooking time, there was no amount of flipping or photo styling that could make these overcooked eggs either pretty or delicious.

Before giving up on Pantelligent, I decided to try out one last recipe, a grilled cheese. The perfect grilled cheese, crisp on the outside and melty within, can be as elusive as a perfectly cooked steak at home. In this particular case, Pantelligent got it right, but that was only after 20 minutes and about 30 demands for adjusting the heat on the stove. At this point in the game, any time a request for turning down the heat was voiced I took the pan off of the stove completely, allowing the temperature to cool about 10 degrees before placing the pan back on the stove.

An overcooked steak, two done-to-death eggs and a pretty good if high-maintenance grilled cheese later, Pantelligent left me with a world of questions. The first two recipes I attempted seemed to include an extra couple of minutes of stove time that resulted in an overcooked finished product. The last one was only saved by drastic drops in temperature that couldn’t have been achieved simply by lowering the heat on the stove. Did the lightweight material of the pan conduct heat a little too well? Or had the recipes not been thoroughly tested? Either way, the thinking behind Pantelligent is straight out of a 1950s home of the future, but the execution still has a couple of years to go.

The Pantelligent is available online for $199.