I make fresh pasta quite often. That is to say, I generously flour my floors, countertops, pants and shirt, cabinet doors, and if he’s nearby, my dog. There are usually globs of tacky dough clinging to the refrigerator handle. Bits of air-dried noodle smashed into my hair and floorboard grouting are not uncommon. This may sound like the hyperbole of an incompetent cook, but since I’m not Mario Batali, the finer points of the bowl-free well method still elude me. I prefer to do everything by hand, including mixing, resting and shaping the dough, so naturally my kitchen gets very messy and I get very messy, but the pasta is divine. I’ve figured out the perfect ratio of eggs to flour; I know what the optimal texture feels like in my hands; I’ve learned to finesse all the little idiosyncrasies of my machine, including knowing when to run dough through twice on the first setting instead of proceeding to the second notch.

Dried pasta from the supermarket simply cannot compare to the tender, toothsome texture of fresh homemade noodles. But the latter comes at a cost. Mastering the technique can be vexing, and it requires an incredible amount of space. If, like me, you prefer a more classic method using a hand-crank roller and not an electric mixer attachment, it can also take two people to achieve ultra-long noodles. 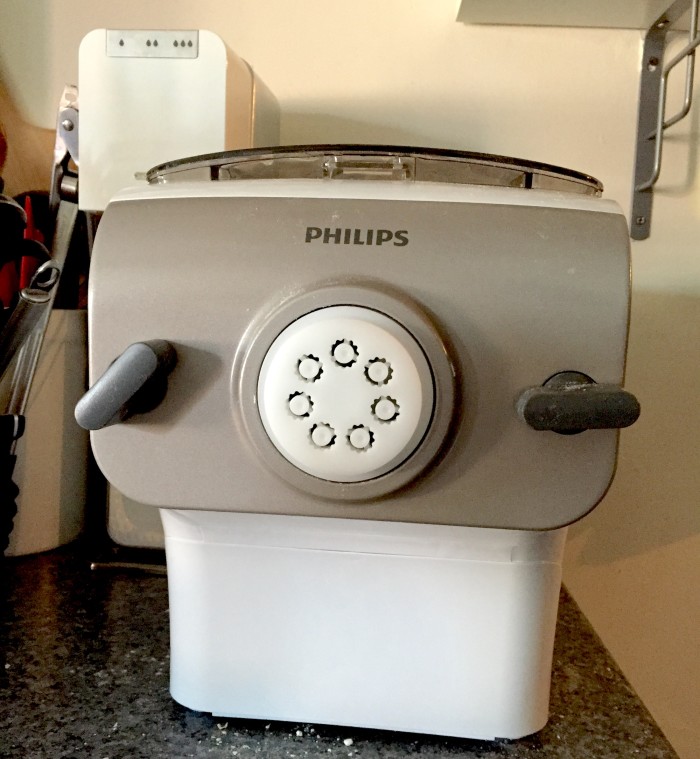 Philips recognized that there is a large faction of home cooks more sensible than myself who want a faster, less cumbersome method for creating fresh pasta at home. Enter the Philips Pasta Maker. Not unlike a bread machine, it has a large mixing basin with a robust kneading wand where the dough is mixed, then pushed through the extruder on the front of the machine. There are four shaping discs for spaghetti, fettuccine, penne and sheets. This surprisingly compact appliance will mix and extrude two to three servings of pasta in less than 20 minutes. In addition to being efficient, the simple recipe book and prescriptive measuring cup take all the guesswork out of dough recipes, making it a great option for novices and time-constrained cooks.

The extruder is a big plus. The roller I use at home only makes long noodles, so being able to make tubular shapes sounded like a premium upgrade, but I had concerns about the integrity of the dough. The automatic settings on the machine (of which there are only two) don’t account for allowing the dough to rest. Resting, in my experience, is critical for developing the gluten in the flour and making stretchy, pliable dough. The machine also strictly dictated flour, egg and water ratios vastly different from my usual recipe — I never use water. Would the machine still be a valuable replacement for my usual pasta-making theatrics? 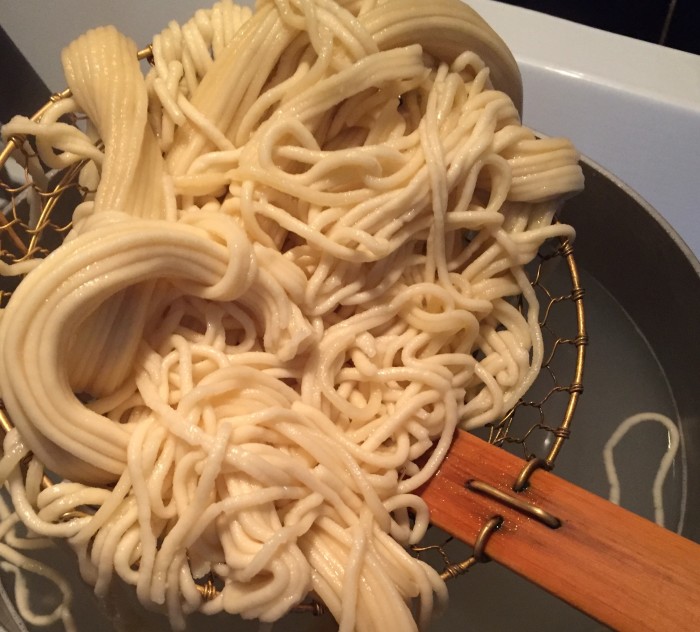 As happens when you’re making handmade noodles, my first few attempts were failures. The machine was extremely sensitive to the moisture content in the dough while mixing. Too wet and it couldn’t be extruded; too dry and the pasta crumbled apart. If the ratio is too far off, the machine will stop and flash an error message. Philips makes an upgraded version of the machine that includes a built-in scale, so if you’re not put off by the higher price, I recommend opting for that feature. In order to get successful pasta, I eventually had to maintain an obsessive attention to the water and egg ratio, adding water in droplets. Even a particularly fat egg would throw it off — it was that sensitive.

Once I figured it out, the machine performed admirably. Having a machine flawlessly roll long spaghetti noodles was a delightful luxury after my usual charade of feeding two-foot-long pasta sheets into the roller with one hand while trying to operate the hand crank with the other. The fresh pasta will stick together (see above photo evidence), so it’s important to still keep copious amounts of flour on hand to toss the noodles as they come out of the machine. The penne cutter was a bit more stressful to use and requires more attention to ensure you’re cutting evenly sized noodles. Because the mold creates a thicker penne than you may be used to, it also doesn’t produce as many individual pieces compared to the spaghetti. I actually found the penne to be too thick; once cooked, the noodles were dense and chewy instead of toothy and light. I tried thinning out the dough to see if that would deliver a thinner shape, but ultimately this failed and the dough was too wet to extrude.

The machine makes small portions. My usual handmade dough recipe calls for roughly three cups of flour and five or six eggs, so I was convinced Philips’s strictly measured single cup of flour and one egg would never work. There simply wouldn’t be enough moisture to bind the ingredients. To my surprise, the recipe worked, but it’s conceived for single-use portions. Dinner for a couple, for example, or hearty side dishes for four. If your goal is to make a large batch of pasta to freeze, you’ll need to run multiple batches through the machine starting from scratch each time, which requires cleaning and drying all the components. The residual dough left in the mixing basin and inside the cutter accessory will throw off the recipe and jam the extruder, meaning you can’t run multiple batches of dough in sequence. Luckily the machine is fully self-contained and only has a few pieces, making it easy to clean. Simply remove the lid and the entire face of the machine will snap loose, making it easy to remove the main mixing basin.

Ultimately, the pasta created with the machine had a nice texture, springy without being too chewy. I added salt to my dough, which is imperative. Personally, I prefer the richness of my handmade recipe which uses a lot more eggs, and I do think the lack of a resting period is noticeable. By allowing the gluten to mature and relax in the dough, you get a luxuriously silky noodle. The machine doesn’t allow for that, so although the final product is completely serviceable, delicious and a far superior alternative to anything in a box, a neurotic pasta aficionado like myself will notice that there is a slight textural anomaly compared to dough that has been allowed to rest.

The machine also included a recipe booklet. Normally the books included with appliances like this are a waste of time, but this one featured some great variations and templates for alternative noodles you can make with the machine, including fresh soba noodles using buckwheat. The machine can also be used for gluten-free pasta, but I strongly recommend using a tablespoon of xantham gum (depending on your recipe) to help bind the dough. The machine is already finicky about the moisture ratio, and without gluten in the flour, you’ll need all the help you can get. But since it’s so easy to clean and breaks down (allowing every component to be washed to avoid gluten contamination), the machine is perfect for households that cater to both GF and regular diets.

The Pasta Maker is ideal for home cooks new to the pasta game or those who have better sense than to spend their weekends fussing over hand-rolled dough. Its biggest selling point is that it makes weeknight pasta dinners completely attainable. Making handmade noodles on a Tuesday night after a long day at work is impossible. But with the pasta maker, you’ll have fresh spaghetti in the same time it takes to cook a fresh pomodoro sauce. Consider your Tuesday night spaghetti-and-meatball routine officially elevated.

The Philips Pasta Maker is available at Amazon, Best Buy, Bed Bath & Beyond and other retailers. Suggested retail price: $349.99.