“Para consumo sacro, todo exceso es profano,” reads a note — a warning, even — at the bottom of the tasting notes in a tiny bar called In Situ in Oaxaca City, Mexico. Translated, it means, “for sacred consumption; excess is profane.” As I prepare to listen to the bar’s owner, a native Oaxacan mezcal expert named Ulises Torrentera who is about to guide me through a tasting of three rare and special mezcals, we are interrupted by an incredible outburst of hooting and hollering. We both look up, surprised. Did somebody win the lottery?

Even better: The founder of Del Maguey mezcal, Ron Cooper — who pioneered the importing of mezcal to the U.S. in the 1990s — has just won the James Beard Foundation award for Outstanding Wine, Beer, or Spirits Professional. The bar is filled with people who work for him and bartenders who have traveled from all over the U.S. to visit the palenques (distilleries; mezcal has its own lexicon) that produce the stuff for Del Maguey.

It’s a defining moment for the smoky Mexican spirit. Mezcal has come a long way in a short time. Thirty years ago, it was virtually unheard of Stateside — and Mexicans themselves disrespected the pre-Columbian spirit. Over the years, bars like Mayahuel in Manhattan, named after the god of agave, Ivy Mix’s Leyenda in Brooklyn, the Pastry War in Houston and Las Perlas in Los Angeles, have opened up with a strong focus on mezcal and its varietal expressions.

For most Americans, agave is best known in the form of tequila — essentially a more industrialized form of mezcal, localized in a few specific appellations of Mexico (though, of course, there is artisanal, terroir-driven tequila, just not much of it). Mezcal, meanwhile, is produced using a more ancient form of distillation that has retained deep ties to indigenous cultures across the country. And while tequila is made from one variety of agave, the higher-production workhorse Espadín, mezcal’s allure is that it can be made from a wide range of varieties that, much like wine grapes, look and taste unique and respond differently to environment.

Which is why, if you are ever offered a taste of a single-varietal non-Espadín mezcal, you should heed Ulises Torrentera’s warning and not throw it back. Instead, sip slowly. You’ll see — it really is a magical drink.

Perhaps because we live in an age so removed from tradition, mezcal is very seductive to people, and since Del Maguey burst onto the scene it has steadily brought in new devotees. One of the newest brands is Mezcal El Silencio, a collaboration between Fausto Zapata and Vicente Cisneros, two friends who originally came from Mexico City and met in L.A., and two mezcaleros in the town of Matatlán, in Oaxaca. When they were living in L.A., Zapata, who owned a tequila bar at the time, was asked to serve a special mezcal product for a corporate fund-raising event. He asked Cisneros, a marketing and branding consultant, to join him, and they took the event as an opportunity to do a deep exploration of the palenques.

During their travels in Oaxaca, a region in southwest Mexico with a strong indigenous culture and a landscape of rugged, low mountains, Cisneros and Zapata met maestro mezcalero Pedro Hernandez, whose family has been producing mezcal in the town of San Baltazar for some 200 years. Talking to him, they knew they had found a repository of talent and knowledge. The onetime partnership turned into a brand, which launched in 2013 and is now available in nine states, with a New York launch set to take place in coming months. Thanks to significant investment in the company, El Silencio is building a well-known brand and is able to bring bartenders and journalists (like me) to Oaxaca to experience the palenques, something invaluable in terms of understanding such an esoteric spirit.

Prior to this mezcal “boom,” towns like San Baltazar and people like Pedro Hernandez were struggling. “Ten pesos per liter was the price a few years ago, and people couldn’t even manage to sell their mezcal, so it was all stored up,” explains Asis Cortés, the founder of El Jolgorio and Nuestra Soledad mezcal brands. Cortés’s family started making mezcal in the 1840s, but they didn’t dream that he would be involved in its production — virtually nobody considered mezcal an exportable product or even something noble as a career pursuit. Instead, they encouraged him to study and learn English, so Cortés studied graphic design, a skill he applies at his company — check out the beautiful labels on the bottles, which he started exporting to the U.S. in 2013.

“Mezcal is more spiritual; its value is that it is representative of culture,” says Cortés. “It’s not just one more spirit. It’s something you can feel because of the history, the tradition. It’s important to me and my family that people understand this.”

The best way to get into mezcal is to go really slowly and take time to learn about each bottle you are tasting. Every bottle has a unique story, and all of these brands are essentially platforms for traditional working mezcaleros in small villages; these humble farmers and distillers are the real artisans behind the spirit. If you’ve ever balked at the price of a bottle of mezcal (some are found on retail shelves for $150 and up), then consider this: Many are made from unique, wild-harvested agave varieties that take up to 25 years to mature; they then go through an extensive, labor-intensive process of roasting, crushing, slow fermenting with indigenous yeasts, and double distilling, using knowledge that’s been handed down over the generations.

Every single bottle of mezcal is a unique product of a specific microclimate and time, and that’s why it’s truly special. “It shifts, it moves, it can’t be put in a box,” says Judah Kuper, a former surfer who fell in love with a mezcalero’s daughter and helped build up the family business through the creation of the brand Mezcal Vago. 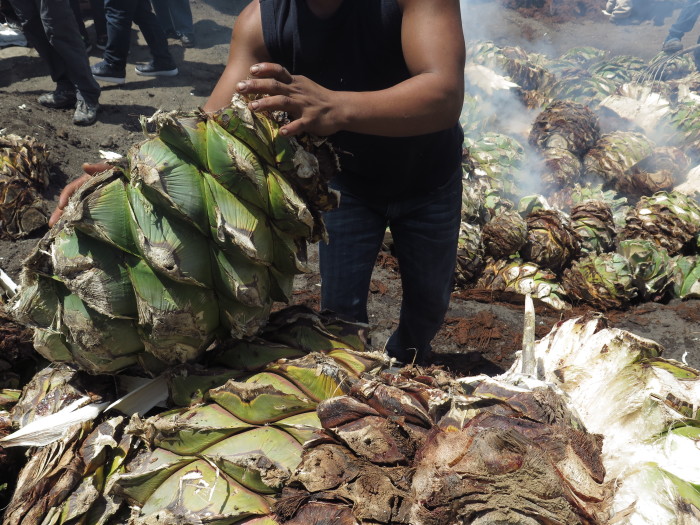 Kuper and I are tasting some of the most exotic, rare, wild-growing agaves that need 15 or more years to mature, and he shares a strong opinion: that producers should stop harvesting wild agave altogether. The reason has to do with mezcal’s rapid rise to popularity, and the fact that bartenders took so quickly to its exoticism — resulting in the endangerment of wild agave species. Many people in the industry acknowledge that it is happening, and they emphasize the importance of replanting, although the problem is that some varieties are resistant to domestication.

One solution to this might be to focus more on how interesting Espadín can be. El Silencio’s most popular bottling is 100 percent Espadín, and Asis Cortés’s Nuestra Soledad line is devoted to showcasing Espadín from various microclimates.

We in the U.S. are lucky to have these hand-crafted bottles brought to us. And for mezcaleros, there are benefits, too: Pedro Hernandez, the master distiller for El Silencio, is opening a school devoted to his community’s native language, Zapotec, using the profits he has gained since his mezcal was exported. It’s quite a business story. But of course, mezcal isn’t just a product. It’s an experience. Try one of the bottles below and let yourself be drawn into the mystical history of this ancestral drink. But remember to sip slowly. In Oaxaca, people like to say “Dixebe,” which is a Zapotec expression of gratitude, before tasting.

Mezcal El Silencio Espadín
The already iconic black El Silencio bottle, made of 100 percent Espadín, deserves a place in your home bar. It is well priced (around $40 retail) and plays well with others when mixed properly into a cocktail, although it is great for sipping on its own. El Silencio also makes a blend called Joven that is a blend of Mexicano, Tobaziche and Espadín and is for sipping.

El Jolgorio Tobalá
The wild-growing Tobalá, one of the varieties that bartenders most love to sip, finds an exciting expression in El Jolgorio’s bottling. Tobalá isn’t easy to pin down — every bottling I tasted revealed new aspects — but you can expect an interesting balance between astringent flavors and floral notes, depending on the style. In Oaxaca, Tobalá mezcal is considered a palliative for stomach ailments. The Tobalá bottling listed on El Jolgorio’s website is from the label’s Matatlán palenque; there is one coming onto the market from the nearby town of San Baltazar, as well. There is also a very limited production bottling of Tepastate, which takes 25 years to mature in the wild, coming to the U.S.; if you see it, order a glass and savor its citrusy flavor very slowly.

Mezcal Vago Ensemble en Barro
All Mezcal Vago bottles are wrapped in labels made with the recycled agave mash from the palenque. The labels also provide every single possible detail about the batch that mezcal comes from, as the company strives for transparency. Ensemble en Barro is a unique bottling in many ways; firstly, it is a blend, made of mostly Espadín as well as about 18 percent Coyote, which is shaped a bit like a pineapple. But it’s also special because the mezcalero, Salomón Rey Rodriguez, hand-mashes the fermented agave pits instead of doing it with a horse. As well, he distills in a clay pot, rather than copper. It is citrusy and a bit nutty, with a robust palate hinting of cinnamon and earth. Around 315 liters made.

Del Maguey Espadín Especial
You’d be remiss if you didn’t explore the lineup of Del Maguey mezcals, with their role in pioneering the spirit’s presence in the U.S. Mezcal lovers consider this a particularly elevated expression of Espadín, owed mostly to the talent of the mezcalero (whose name the company keeps secret). It is a very limited bottling, of course.

Also try: Alipús and Nuestra Soledad both made very affordable Espadín bottlings that attempt to showcase how this variety, considered a workhorse, can display the nuances of terroir.