I love fries, but I don’t always want to go out to get them. Sometimes I want to make them at home, just the way I like them. There are a lot of variables at hand here: What kind of oil should I use, at what temperature and for how long? What about those air fryers I keep seeing on Amazon? What kind of potato should I use? Let’s answer these head-scratchers one at a time.

What kind of potato should I use?
This is an easy one. You can play around with Yukon Gold potatoes if you want, but when you get fries at a restaurant, they’re probably made from russets. When you make them at home (at least on your first go-round), you should be using russets as well. These will give you a longer fry with a crisp exterior and a light, fluffy interior.

What’s the best frying method?
Now, there might be some debate about this, and some people might even have some strong opinions (I’ll see you in the Facebook comments). I did standard and double frying in a Dutch oven, and I tried out an air fryer. Long story short, the traditional Dutch oven double-fried method yields the best results, but honestly, the air fryer was not bad if you’re looking to reduce your fat intake (more on that later).

The double-fried method is a two-part episode: Instead of just tossing them into the fryer at high heat and hoping for the best, you “blanch” them in oil at 325 degrees for five to seven minutes (or until they’re starting to show color around the edges). Remove the half-cooked spuds to a layer of paper towels.

Then you turn it up to 350 degrees and finish them off for another few minutes, or until they look like fries you want to eat. This is the method I used to compare different frying fats.

What the heck is an air fryer?
It’s a fairly new appliance that uses super-hot air circulation along with a small amount of oil to essentially “fry” foods. There are a couple different brands out there with slightly different mechanisms; I used the this T-Fal model. You’re not actually frying anything, but because of the hot air constantly circulating, a crispy exterior can be achieved through the same sort of rapid moisture removal that occurs in frying. The main benefits: It uses less oil, which means you can save money by buying less oil, clean up more easily, ingest fewer calories and save yourself the work of actually heating and standing over a ton of oil.

What kind of oil do I use?
The key here is using something with a high smoke point. Neutral-tasting oils are great for frying: peanut, canola, vegetable, safflower, grape-seed, et cetera. These all have a smoke point well above 350°F. Some oils, like corn, coconut and sesame, have smoke points beyond 350°F, but they impart a lot of flavor into the finished product that you may or may not want. And olive oil or anything unrefined has too low a smoke point to be useful for frying, as it will burn before it hits the temperature that gets you a golden-brown exterior.

There’s another side to this, and that’s frying in animal fat. In this case, you want that fat to impart some flavor into the fries. Beef tallow, chicken schmaltz, pork lard and duck fat are all viable options here. For my personal rankings of favorite fats, it goes like this: duck, tallow, schmaltz and, lastly, lard, which is sorta crazy considering how much I love pork. If that sounds a little strange to you, just know that McDonald’s used beef tallow for its famously addictive fries until 1990, when vegetarians discovered the trick and voiced outrage. In short, the fat you use imparts additional depth of flavor. It’s not overt; if you’re eating a duck fat fry and don’t know it, you won’t be saying, “Wow, this fry tastes like duck confit!” but you will be thinking, “Damn, why is this fry so good?!”

Any other tips?
After you cut your potatoes (I like to peel mine as well, but that’s up to you) somewhere between 1/4 inch and 1/2 inch depending on how thin you like your fries, soak them in cold water for at least 20 minutes and up to 24 hours. This keeps them from oxidizing and removes some of the starch that can weigh fries down and make them soggy. Once they’re done soaking, dry them very well before you move to the blanching stage (see our dishtowel trick here).

I wanted to test out a few variations to compare the following: 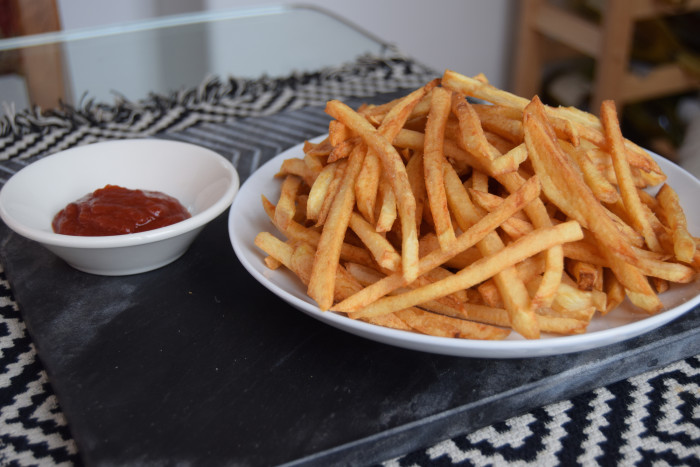 Russet potatoes in vegetable oil
These came out great. I used about two pounds of cut potatoes with 2 1/2 cups of oil, fried in four batches. And when I say in four batches, I mean that you are going to blanch ALL the fries in four separate batches, then you turn up the heat, and then you finish the fries in four batches again in the hotter oil. The reason you want to do it in batches is so you don’t (a) overcrowd the pot, which prevents the fries from cooking properly, or (b) drop the temperature of the oil too much, which also prevents the fries from cooking properly. If you have a candy or oil thermometer (or a cool laser thermometer like I have), you will have a much easier time with temperatures.

When you pull the fries out of the oil, put them onto a baking sheet lined with paper towels, pat the oil off the top a little bit, and sprinkle with salt immediately from about 24 inches above the fries to ensure even distribution. Dabbing the extra oil helps keep them from getting soggy, and applying salt right away while the fries are still hot and fresh helps the salt stick and bypasses those “salt-lick” fries that show up from time to time.

This is a great basic method for making fries at home, and I highly recommend it. 4 out of 5 stars 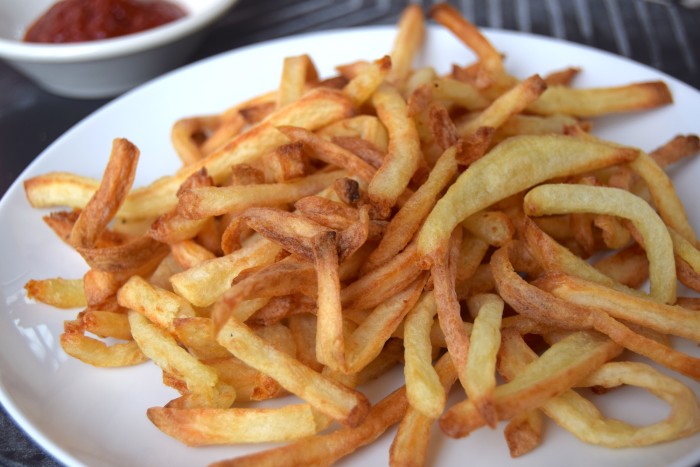 Russet potatoes in air fryer
My first thought was “This can’t possibly work.” The result: It sorta works! I followed the fry recipe that came with the air fryer. They suggest using Yukon Gold potatoes, but since the regular fries I was doing were russet, I wanted to have a more direct comparison than using both a different method and a different potato, and thus the russets went in the air fryer.

Take the same potatoes that have been soaked and dried and throw them right into the air fryer — the “max line” lets you put in about 1 1/2 pounds of potatoes — then add a couple of tablespoons of the neutral oil of your choice (I used vegetable). The process here was super-simple, and cleanup compared to the regular method was a piece of cake. On top of all that, there’s less oil used, and less oil in the fries. So the air fryer actually wins on many fronts. The aspects it doesn’t win on are crispiness, uniformity and overall taste.

The results were mixed; a few bits that were overcooked and a bit too crispy, but some bits were not quite crisp yet. One thing I noticed is that during the process, some of the fries can sort of get bunched into groups as the “arm thing” inside slowly stirs them around. Next time, I’m going to try poking at them to break up the groups.

If you don’t want the hassle of frying in your Dutch oven, this is a serviceable option, but it can’t compete in the end on overall eating experience. 3 out of 5 stars 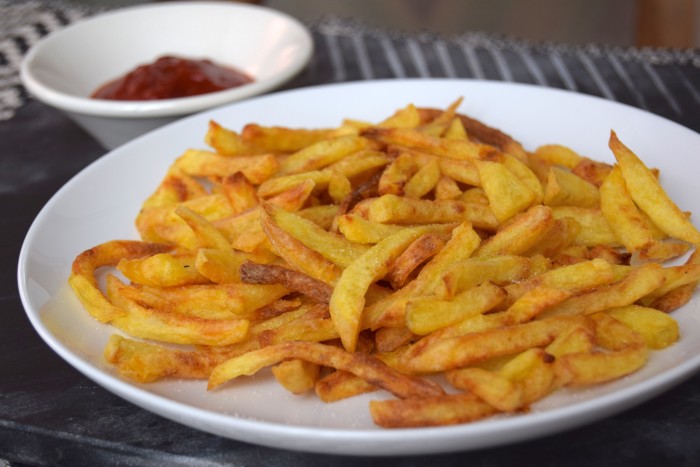 Yukon Gold potatoes in air fryer
As I mentioned, the directions that came with the air fryer specify using Yukon Gold potatoes, so I figured following the directions was worth a shot. These came out a little better than the russets, cooking more evenly so there were fewer overcrisped or underdone bits. However, due to the nature of the potato, the fries were slightly denser and lacked the fluffy interior you get from russets.

This was a toss-up for me compared with the russets in the air fryer; both had their pros and cons, but ultimately it was roughly the same experience. 3 out of 5 stars 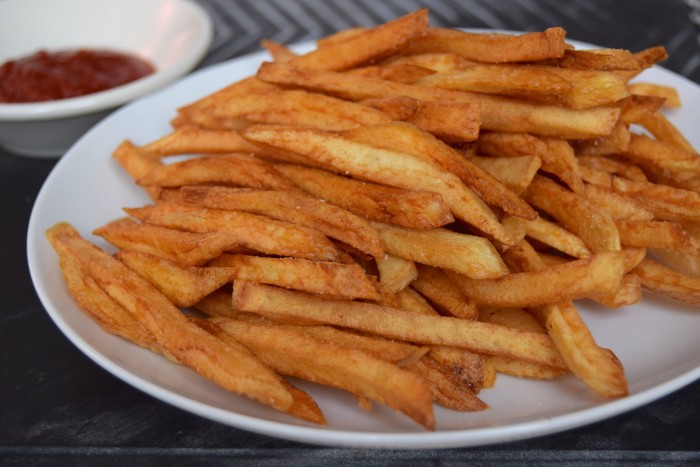 Russet potatoes in duck fat
These…these are The Fries. When you get these fries right, you’ll agree that they are absolutely amazing. Duck fat gets fries crispier than vegetable oil and a little deeper in color. I used the exact same method as the russets in vegetable oil, and while the results came out similar, they weren’t quite the same. They don’t look quite as golden, but oh man, the flavor. THE FLAVOR. If you’re trying to impress anyone, from a date to your mom to your overbearing coworker who demands you bring them food (I can’t be the only one with an overbearing coworker), this is the move to make. Plus, you can recycle the fat for another use, which is great, because duck fat can be costly.

Crispy, beautiful, and hands-down the most delicious of the bunch.  5 out of 5 stars