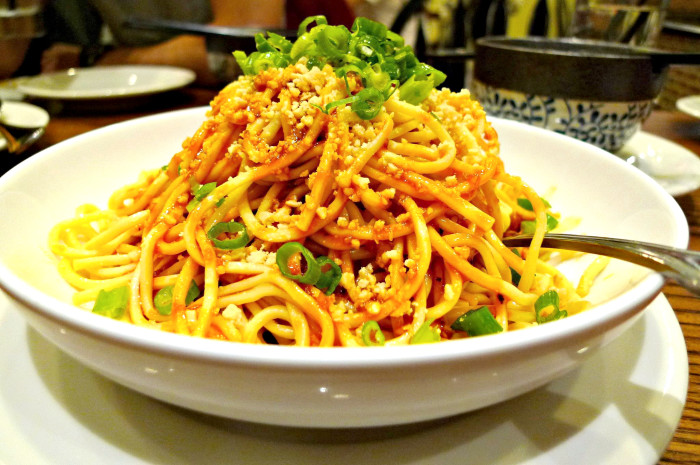 Recently I realized that the common thread of my last three years of manic globe-trotting is not a thread at all: It’s a noodle. Preferably one doused in chili sauce or nestled in a bowl of steaming broth — with a side of dumplings, if I can get them. By now I’ve racked up visits to so many Chinatowns around the world, somebody should probably give me a punch card. From Penang to Portland, Sydney to San Francisco, Toronto to Bangkok, D.C. to D.F., and even Yangon to Havana, I’m the white girl dining alone, head down, happily absorbed in a bowl of noodles.

It’s not just the food I crave, but the ritual and familiarity. My food memories from childhood in Portland, Oregon, revolve around hot-and-sour pit stops, after-school dim sum runs, my first steaming bite of potsticker. Nowadays, in far-off places where I’m generally a bumbling foreigner, you can hand me some noodles and a pair of chopsticks and I know what to do. The people serving me are probably outsiders, too. We communicate brokenly in whatever common tongue is available, but we fluently speak the language of this food we love.

After eating my way through Italy’s Emilia-Romagna region in August, I settled for a few days into a rented apartment in Milan. It had a balcony with views, remarkably fast Internet and attractive artwork on the walls. But my favorite feature was the location, just a five-minute walk from Chinatown. I tossed down my bags and hoofed it up to Via Paolo Sarpi, which for four or five blocks is dominated by signs with Chinese characters, with more action on the side streets. I’d spent a week gorging on tortellini in butter sauce, Parmigiano and prosciutto, and my palate was crying for a spicy jolt.

It showed up at a cheerful little place called simply “Noodles Soups,” across the street from the multicolored wig shop. There I ordered spaghetti in brodo con manzo (noodles in broth with beef) and the server didn’t blink at my bad Italian. None of the young Asian customers paid me any attention as they chattered in Mandarin and slurped audibly. I added chili sauce and slurped along, noting that the noodles were actually Italian spaghetti. The the hilariously translated ravioli al vapore (steamed dumplings) caught my eye, but I was too full. I felt happy and at home.

That meal reminded me of a similar one I had in Paris two years ago. Give me a one-night stopover in the City of Lights and where do I head? Not to Le Chateaubriand or Le Bistro de So-and-So, but straight to Chinatown. Le Quartier Asiatique, as it’s exotically known, is actually a generally Asian area home to folks from not just China but Vietnam, Cambodia and Laos, too. The hood’s main concessions to the East are a pagoda-roofed shopping center and a McDonald’s with Chinese characters on the sign.

Paris in early November can be cruel and blustery. After ghosting my way through Montmartre and le Quartier Latin, visiting places I hadn’t seen in 10 years, the nostalgia and the bare trees in the Jardin du Luxembourg had me feeling as gray as the city. Needing a pick-me-up, I hauled myself onto le metro and popped out in the 13th arrondissement, home of the Triangle de Choisy — the Asian quarter’s other name. I made my way to a noodle joint somebody had recommended, and the steaming soup restored me to something like happiness.

Fast-forward to another year, another continent. It’s sweltering in Mumbai and I’m sticking to the backseat of a vintage Ambassador cab as I answer the questions of my overly nosy driver. “Well, Mustafa,” I say, as though I’m glad he asked, “my husband is waiting at the Chinese restaurant.” Not only does that sound like the sort of canned line you’d find in a foreign-language textbook, it’s simply not true. I have no husband, but Mustafa doesn’t need to know that. We are, however, speeding toward a Chinese restaurant where I’ll meet up with my friend Shawn and his pal Jinu, a Mumbai native who’s offered to teach us about the wonders of Indian Chinese food.

Royal China is the first outright Chinese restaurant I’ve been to in India, but Shawn and I have ordered Indian Chinese dishes all over the country, from Goan beach huts to upscale French-Asian places in Pondicherry. We so liked the chili chicken at a halal joint in Ooty (a hill station in Tamil Nadu) that we had it for lunch one day, then went back and had it for dinner. There’s a Chinatown in Calcutta, we’ve heard, settled by Hakka Chinese in the 19th century. We talk of trying to go there but never make it. Calcutta is far, far east — which made it a logical first stop for these immigrants.

As I traverse the globe, I find myself fascinated by the Chinese diaspora. These people got around — and they brought their food with them. Not just general “Chinese food” (that unfortunate gloopy stuff of the neon sauces), but the food of particular provinces or cities. Each emigration has its own fascinating history and, after decades or centuries of adaptation, unique foodways.

Perhaps you’ve heard of Singapore’s famous hawker dish, Hainanese chicken rice? This one-plate meal of poached, sliced chicken served with consommé, rice, cucumber and chili paste is originally a Chinese dish from Hainan, an island province in the south of the country. You find a similar chicken rice in Malaysia and in Thailand, where it’s known as khao man gai.

In the 19th century, a wave of Hainan emigrants arrived in British-ruled Malaysia, and many ended up working as cooks in British military camps or homes. Preparing food for an expat palate, using ingredients from the adopted country and flourishes from the homeland, resulted in a unique cuisine. You can still find vintage kopitiam (coffee shops), like 87-year-old Yut Kee in Kuala Lumpur, that specialize in this food. Yut Kee’s most famous dish, roti baba, is pork and crab encased in a pastry crust and served with Worcestershire sauce. It bears no small resemblance to beef Wellington. It’s delicious.

Havana’s once-lively barrio chino these days mostly consists of a traditional Chinese gate framing one unimpressive half-block where aggressive menu wielders compete to entice tourists into their restaurants. I’d done my research, so I brushed past them all and beelined straight to Tien Tan. Sitting on the patio of supposedly the best Chinese restaurant in Havana, I proceeded to have the worst Chinese meal of my life. The noodles were greasy with foul-tasting oil; the rest of the dishes were grim. Only the dumplings (called “ravioli” once again) tasted halfway appetizing. Havana once had a Chinese population big enough to fill 40-some square blocks. But the decades, the poverty and the political situation have clearly not been kind to the food scene.

This experience scarred me so much that I didn’t set foot in any of the restaurants along Mexico City’s one-block barrio chino, but I did have a pretty decent Korean barbecue meal. In other travels, I’ve caught whiffs of other Chinese diasporas. From Dan Chang, a tall black dude I met in Barbados whose dad happens to be Chinese-Jamaican, I learned of that island’s robust Chinese community. And Joe from Melbourne, whom I befriended in Estonia, told me his father is Chinese–Papua New Guinean, mentioning that his grandparents were part of a sizable group there.

I’d love to go sniff out the Chinese communities, or what’s left of them, in all of these places — mainly just to see what people are eating. Calcutta’s Chinatown, diminished though it may be, is definitely on my list; Indian Chinese food is so damn good. Until then, it’s nice to know that almost any large city around the world offers my preferred cure for homesickness, loneliness, or whatever else ails: a pair of chopsticks and a bowl of noodles.