Did you know that the movie Back to the Future was originally released in 1985? Yeah, that was 30 years ago. But did you also know that in Back to the Future Part II, Marty and Doc travel to 2015? And that the Chicago Cubs win the World Series!? And OMG, it’s 2015 right now and, sure enough, the Cubs are in the playoffs?! So where the hell is my flying car, my self-adjusting jacket, my double necktie, my mini dehydrated pizza?

Sorry, I got sidetracked. Anyway, Back to the Future is awesome and spans 130 years from 1885 to 2015. In the original film, our heroes start in 1985 and go back to 1955. In the second film, they go forward to 2015. And in film No. 3, they drop back to 1885. All those time periods obviously were very different from each other, but have you thought about how they were different in terms of burgers? Probably not, but Jamie Schweid of Schweid & Sons did, and for that we are thankful. He enlisted the team at the Ainsworth in midtown Manhattan, and put together a special burger from each stop in the Marty McFly Mega-Saga, all available beginning this Wednesday, October 21. I could go in chronological order, but that’s too easy. We’re going in movie-timeline era-visited order.

I’m not sure if you ever played this classic video game, but I definitely did. I had completely forgotten about it, though, until I saw this, and a flood of memories came rushing back. You try to build burgers while anthropomorphic hot dogs, pickles and fried eggs try to stop you, a game that’s obviously based on real-world experiences. On this 1985-inspired burger, you’ve got all the burger components from the game (bun, burger patty, ketchup, lettuce, tomato) plus pickles and a fried egg. Not sure if it comes with a hot dog and pepper shaker, but I hope it does. 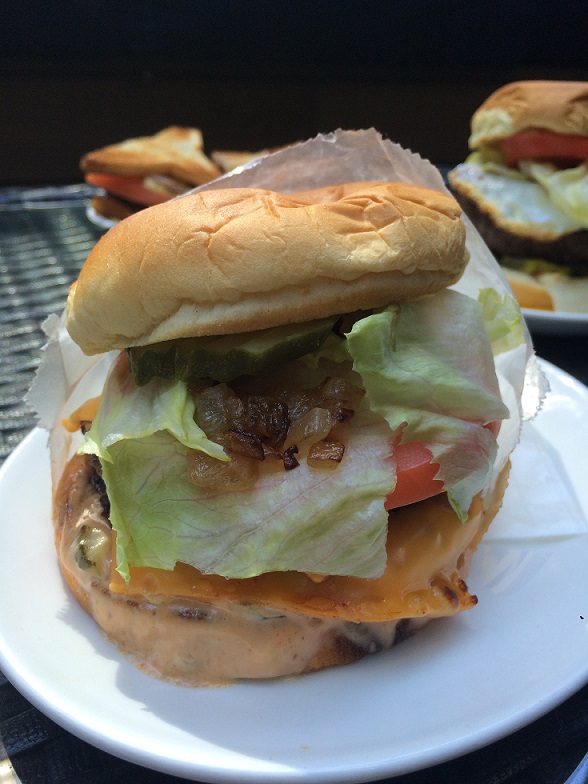 That’s right. If you’ve been craving some In-N-Out but don’t have any plans to go to California for a while, you can get still get some satisfaction. This burger, of course, has Thousand Island dressing, chopped sautéed onions, pickles, tomato, iceberg lettuce, American cheese and yellow mustard. It was pretty close to the real deal, though, if I’m being perfectly honest, I think my method is a little closer. 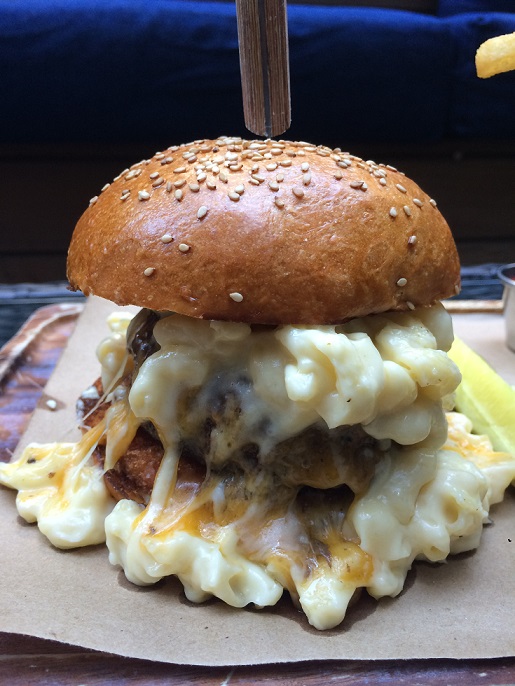 It’s 2015 right now, and the Ainsworth exists, so it makes sense to me that the restaurant would come up with its own special twist on a burger for our current day and age. The guys at the Ainsworth went with a mac and cheese burger, which honestly I haven’t found to be too compelling in the past, but they really nailed it. Like, far and away the best mac and cheese burger I’ve had. That’s what happens when you have both a panko-crusted mac and cheese patty under the burger patty AND an extra scoop of mac and cheese on top of the burger patty, AND you also go ahead and put extra cheese on it. So yeah, this one is worth the calories. 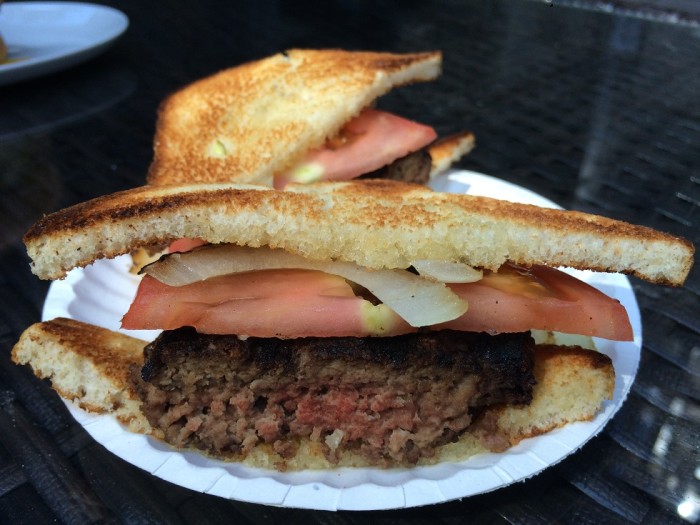 Now, the Ainsworth folks cheated a bit here. The Louis’ Lunch burger was actually introduced in 1895, but you know what? They get a pass. This is something someone would have got down on a long time ago, and that’s really all you need to know. I wasn’t excited necessarily to try this one compared to the others, but I was really pleasantly surprised. White bread, burger patty, onions, tomato and that’s it. But the burger was high quality, seasoned well and cooked properly, so it was actually pretty damn delicious. If you have an aversion to condiments (you know who you are), this is your guy right here.