The French connection to New York City is strong and longstanding. There’s a colossal neoclassical sculpture in New York Harbor to prove it. But, Lady Liberty is only the most gargantuan gift from France in terms of sheer wrought iron and steel. Culturally, French influence casts an even greater shadow. Gustatory Gotham, in particular, owes much of its culinary cred to the great cooks from across the pond. For years, the city’s most hallowed temples of haute cuisine all skewed heavily French: La Caravelle, Lutèce, Le Cirque. Even now, with so much buzz surrounding the flavors of Asia and other regions of Europe, French cuisine still maintains an impressive footprint across the city map. And there’s a brasserie, bistro or bakery to meet every Gallic-inspired impulse that strikes you. Herewith, our Frenchiest favorites.

1. For the old-school French luxury experience: La Grenouille
This elegant, white tablecloth restaurant is a Midtown stalwart and has outlasted many more well-known places, having opened in 1962. The food, service and décor are classic French all the way, and while most of the clientele is older and staid, the restaurant has smartly evolved so that the dishes and wine selections aren’t all throwbacks. If you’ve never been, dress yourself up and book a table. 3 East 52nd St., New York, NY 10022, 212-752-1495, la-grenouille.com

2. For coffee, croissants and a South of France vibe: Maman
This is a new entry into NYC’s French restaurant scene, but it’s something of an instant classic for the downtown crowd. Croissants are as real as it gets, and the sandwiches, coffees, teas and everything else here are first-rate, as you’d expect from a team that includes a Michelin-starred French chef and a co-owner of nearby natural wine bar La Compagnie des Vins Supernaturels. Check out our design profile of Maman here. 239 Centre St., New York, NY 10013, 212-226-0770, mamannyc.com

3. For a grand café experience (including a baguette to go): Lafayette
When Andrew Carmellini took over this spacious room and turned it into an authentic French café, with a serious bakery right up front, it quickly became the buzziest spot in NYC, and helped put French food back on the map here. Now, it’s a reliable place to experience the best of France. And be sure to try dessert by celebrated pastry chef Jen Yee and then grab a baguette to go. 380 Lafayette St., New York, NY 10003, 212-533-3000, lafayetteny.com

4. For an escape to Provence via Greenwich Village: Claudette
Everything tastes fresh at this newcomer near Washington Square Park, whether it’s true Provençal dishes like bouillabaisse or more pan-Mediterranean offerings (tagines and pastas). The décor is bright and airy and best suites to warm days when the windows open wide onto this stretch of 5th Avenue. Dinners here are elegant yet relaxed, and the restaurant is now open for lunch and a leisurely brunch, as well. 24 5th Ave., New York, NY 10011, 212-868-2424, claudettenyc.com

5. For the Keith McNally remix: Balthazar and Cherche Midi
You can’t run a list of French restaurants in New York City without including Balthazar, now the best-known of Manhattan’s master of the French restaurant remix, Keith McNally, especially now that Pastis has closed. The Soho fixture remains one of the most Parisian-feeling rooms in NYC, and plates of steak frites or a perfectly cooked omelet will make a Francophile’s heart flutter. A more upscale and updated take on French cooking can be found nearby at McNally’s new Cherche Midi. Balthazar, 80 Spring St., New York, NY 10012, 212-965-1414, balthazarny.com; Cherche Midi, 282 Bowery, New York, NY 10012, 212-266-3055, cherchemidiny.com

6. For 50 years of history: Le Périgord
The oldest of New York’s old-school French restaurants, right down to the starched white linens and servers in tuxedos, is presently celebrating its 50thanniversary. To commemorate, it’s offering a special menu of “forgotten” dishes from the past, such as the Billi Bi (creamy mussels soup). 405 East 52nd St., New York, NY, 10022; 212-755-6244, leperigord.com

7. For French-Moroccan: Café Gitane
For a laid-back Parisian-style café experience, head to this French-Moroccan spot in Nolita, which is known for drawing a highly fashionable crowd. Designers Karin Gustafsson and Aurélie Bidermann both rave about the avocado on seven-grain toast with lemon and chili flakes. 242 Mott St., New York, NY 10012, 212-334-9552, cafegitanenyc.com

8. For the honor of giving M. Ansel your money: Dominique Ansel Bakery
Even if you hate the idea of spending hours on line, you still have to admire the passionate craftsmanship of proprietor Dominique Ansel. The French-born pastry chef catapulted to fame with his hugely ballyhooed (and now trademarked) croissant-doughnut hybrid. Far less famous but equally delicious: his classic madeleines. 189 Spring St., New York, NY, 10012, 212-219-2773, dominiqueansel.com

9. For feeling like you’re in an actual French charcuterie shop: Epicérie Boulud
For the most authentic fine French charcuterie, hit Épicerie Boulud, chef Daniel Boulud’s house of French terrines right next door to his Mediterranean-themed bistro, Boulud Sud. Try the pot-au-feu, jambon perseillie, and duck and fig terrines, among others. Pick up a buttery jambon de Paris and Gruyère baguette, a superb saucisse in a housemade bun, or an authentic pan bagnat, and grab a pound of any of their dozen imported French cheeses on your way out. 1900 Broadway, New York, NY 10023, 212-595-9606, epicerieboulud.com 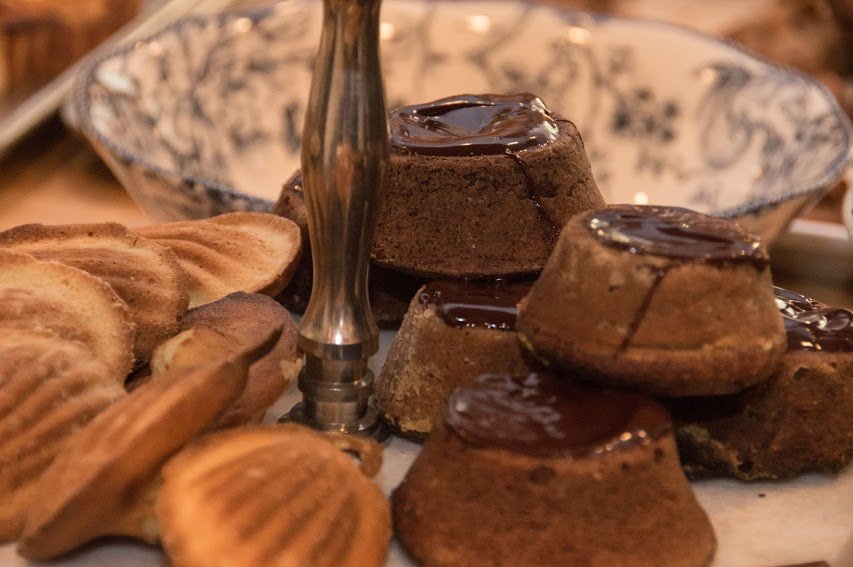 10. For a seamless urban boulangerie experience: Bouchon Bakery
Head to Thomas Keller’s New York outpost of his famed Yountville bakery. Pick up fluffy madelines, carrot cake macarons (among dozens of other flavors), and the crown jewel of the menu: pastry puffs filled with vanilla custard and chantilly cream that can only be described as perfect. Craving something savory? Don’t miss the grilled cheese on brioche, quiche Lorraine and superb French-style tuna sandwich. 1 Rockefeller Plaza, New York, NY 10020, 212-782-3890, bouchonbakery.com

11. For the hottest table in town, period: Dirty French
Want to dig in to one of the city’s finest côtes de boeuf as Jeremy Piven and his latest model girlfriend share chicken and crêpes for two at the adjacent table? Call early, and often, to reserve at the latest success from the rapidly expanding Major Food Group, located in the new Ludlow Hotel. 180 Ludlow Street, New York, NY 10002, 212-254-3000, dirtyfrench.com

12. For a real neighborhood vibe, Manhattan Edition: Brasserie Cognac
Oftentimes, simple is best. Located conveniently near Carnegie Hall (and with a recent, more intimate second opening on the Upper East Side), Cognac presents French classics in a casual, albeit bustling setting. You’d be hard-pressed to find finer renditions of croque madame and soupe à l’oignon in the city. The filet mignon flambé is also not to be missed. 1740 Broadway, New York, NY 10019, 212-757-3600, and 963 Lexington Avenue, New York, NY 10021, 212-249-5100, cognacrestaurant.com

13. For a real neighborhood vibe, Queens Edition: Tournesol
Like the tiny promotional auto parked out front, this charming one-room bistro, with its red banquettes and white tin ceiling, is the definition of cozy. Visiting Manhattanites are often surprised by the reasonably priced menu, which includes a foie gras terrine made in house and a perfectly executed hanger steak with bearnaise. Most striking: the all-French wine list transcends the usual trappings of Bordeaux and Burgundy with selections from lesser known regions like Cahors and Gaillac, as well. 50-12 Vernon Blvd., Long Island City, NY 11101, 718-472-4355, tournesolnyc.com

14. For a real neighborhood vibe, Brooklyn Edition: French Louie
Despite an impressive pedigree – it’s owned by the Buttermilk Channel team – this 50-seat spot remains something of an insider’s secret. The pan-fried skate is a favorite, as are the mussels, both of which go down almost too well with the excellent French wines curated by owner Doug Crowell. 320 Atlantic Ave., 718-935-1200, frenchlouienyc.com

15. For understanding a true French macaron: Ladurée
Ladurée versus Pierre Hermé: it’s the great macaron supremacy debate in Paris. New Yorkers have been given the chance to side with the former venue, as two city Ladurée branches have opened in the past couple of years. Expect long lines during prime times and there’s no need to sit for a full meal at the SoHo outpost, but one bite of a salted caramel macaron and all is forgiven. 864 Madison Avenue, New York, NY 10021, 646-558-3157, and 398 West Broadway, New York, NY 10012, 646-392-7868, ladureeus.com 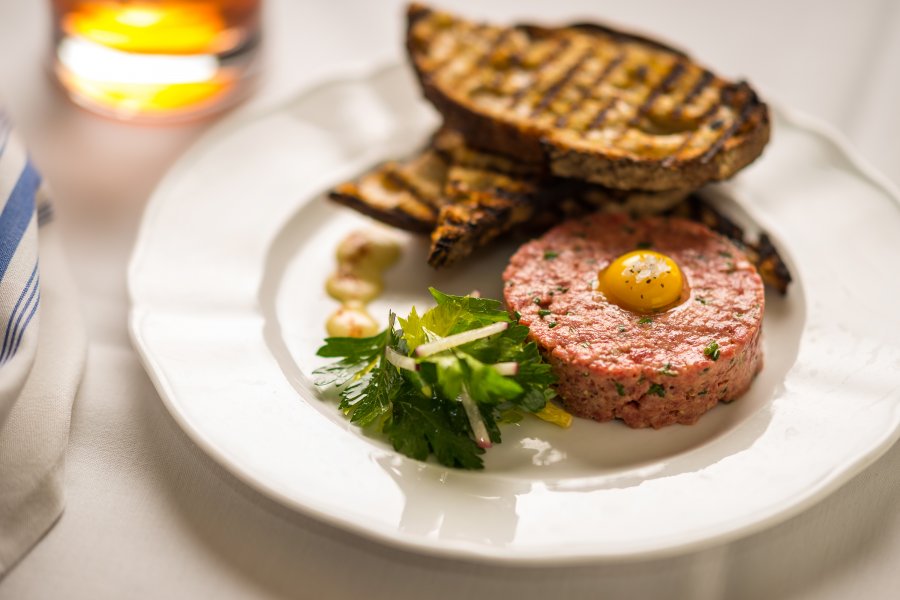 16. For sampling one of the city’s most tender birds: Rotisserie Georgette
Georgette Farkas — former longtime marketing director of the Daniel Boulud empire — has done a fine job at the helm of her first restaurant, the elegant, year-old Upper East Side favorite of the “ladies who lunch” crowd. An open kitchen ensures that guests can check out the trademark rotisserie chicken before it’s carved up. Pro tip: spring for the “poule de luxe,” which is stuffed with wild mushrooms and foie gras. 14 East 60th Street, New York, NY 10022, 212-390-8060, rotisserieg.com

17. For lunching luxuriously at a (somewhat) modest price: Jean-Georges
There may be no French chef with more national name recognition than Jean-Georges Vongerichten. And there may be no more affordable meal at any three Michelin-starred in the world than lunch at his eponymous restaurant in the Trump Hotel Central Park. Starting at $48 for two courses, lunch at J-G teases diners with a stunning glimpse into the world of fine, fine dining. 1 Central Park West, New York, NY 10023, jean-georges.com

20. For oysters and absinthe: Maison Premiere
It’s a classic Parisian pairing, and this Williamsburg bar nails it with more than 30 absinthes — some familiar names, but also many from smalltime craft distillers — and oysters from up and down the East Coast (both U.S. and Canada). 298 Bedford Ave, Brooklyn, NY 11211, 347-335-0446, maisonpremiere.com