You can feel it instantly in the morning air – in the hum of stand-still traffic, surrounding the crumbling British colonial buildings rising out of trash-lined alleyways. Throngs of people shuffle about, a mix of business suits, tattered clothes, monk’s robes and longyi, the traditional men’s wrap similar to a sarong. Many paint their faces —from simple smears to ornate designs—with the pale yellow cream of ground Thanaka wood, to protect against the intense heat of the Myanmar sun.

And the sounds! Urgent, and in your face: horns honk, food stands echo with the clangs of spoons against pots, tea sippers make kissing noises to attract waiters and street vendors shout. Every alley is packed with life, filled with impromptu markets selling drinks, beetlenut chews, and food. Noodle vendors set up back-to-back, tables laid with dozens of curries, fresh fruit, veggies, and soups. Shwedagon Paya, a giant golden pagoda in the center of town, glows from its spot on the skyline.

It’s dawn, the energy is contagious, and I’m in search of breakfast—fish stew. 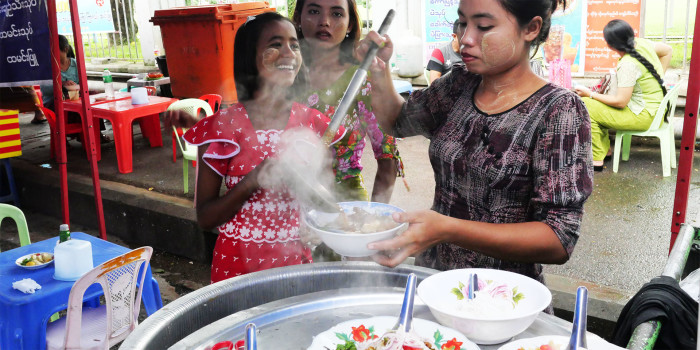 Just outside Chinatown, I find what I’m looking for: Mohinga, the unofficial national dish of Myanmar. A family of young sisters stands over a cauldron of broth with bowls at the ready. I point hopefully at the steaming pot of mustard-colored soup and she quickly assembles the pieces: vermicelli rice noodles, chickpea fritters, one hard-boiled duck egg, and another encased in crispy fried dough. Banana tree stem and fresh herbs perch on top and the whole thing disappears beneath catfish broth. Breakfast of champions.

I set myself up at a low plastic table and dig in. One slurp and it all makes sense. the soup overflowing with texture. Layers and layers of crispy extras mingle with the slippery rice noodles, set off by a mildly fishy, rustic broth. The braised banana stems look a bit like tripe but snap under my teeth like crisp celery. It’s earthy and filling and refreshing all at once.

Later, once it’s dark, the city transforms. Fluorescent lights illuminate narrow alleys, and whole tent villages of street food vendors have been replaced with new ones. I’m onto the next on my must-eat list: Offal Hot Pot.

Wherever there are street food vendors in Yangon, there are sure to be an intrepid few hawking offal hot pot, an otherworldly meeting point between Japanese yakitori and fondue service. A bubbling vat of pork broth (with what appears to be coiled intestine just below the surface) simmers away, a custom built table wrapped around it. A hundred or so skewers form a wreath around its perimeter, each pointing into the boiling porky goodness, soldiers waiting for service. Each skewer holds two bites of different cuts: skin, ear, tongue, fatty neck, liver, large and small intestine, hard-boiled chicken egg, and more I can’t identify.

I’m shown to a seat around the communal pot. The man in charge ladles a bowl of soup from the central well and points to the hot sauce. From there, the system is easy: grab (or ask, if it’s out of reach) whatever you’d like, and place it in the soup until it’s hot to your liking. Once it becomes clear that I’m willing to eat, we engage in a cheerful game of pork charades; I point to a skewer and guess which part of my body it would have come from, then he laughs and reveals the correct answer on his own body.

The skewers are across-the-board delicious. The collagen-rich broth, packed with heat and salt is the finishing touch on an array of already perfectly-cooked bites. The skin-pieces have a pleasant chew; the fatty bits melt in my mouth. The liver is mild, the tongue tasty and even the mystery bits of offal are surprisingly tame on the funk scale. The hot sauce has a bright, fermenty tang. Knee to knee on either side, it’s all smiles and excitement between with my fellow brothers and sisters in pork. Full, I hand in my empty skewers to be counted up for my bill.

I have one more bite to try, and it’s something I’ve been putting off: crickets.

I’ve seen them everywhere in Southeast Asia, in giant golden piles, ready for consumption. While my head knows it’s my Western squeamishness that keeps me away, but

But! I’m here, and I want a challenge, damn it. I find a good-looking pile of particularly big bugs and order a handful. The cricket hawker counts out the right number of pre-fried arthropods into a hot skillet, warming them with a dash of dark soy sauce. They’re emptied into a plastic bag, traded for a few kyat and I have my snack. And now…?

A helpful bystander jumps in to assist, showing me how to tear off the outer spiny legs and hard shell, like a kind of terrestrial peel and eat shrimp, leaving only the tasty bits. I close my eyes, toss it into my mouth, and bite down. It’s clunky, with a nutty, popcorn-like flavor, but—after a few chews—an easy swallow. I was ready to struggle, but they’re amazing. I reach into the bag and pull out another, again and again, refining my hand at the prep: legs, wings, bite. I imagine popping them at a movie theatre, maybe during a showing of “Starship Troopers.”

In the end, I came to Myanmar knowing almost nothing about it and left in love. Inside a country ravaged by its past and present lives a thriving culture, one that effortlessly pulls joy and flavor from its hugely varied population. Through its food, I found a seamless blend of local tradition and neighboring influences, immense cultural pride, an eagerness to share, and more human warmth than I ever expected.

Plus, the beer is pretty good too.