Los Angeles’ culinary scene is one of the best in the country, and now there’s a book to prove it. Food and travel writer Alison Clare Steingold collected recipes from all the top restaurants in the City of Angels. In this tribute to some of L.A.’s most famous avocado toast offerings, Steingold takes a minimalist approach to map out these brunch beauties.

Reprinted with permission from The L.A. Cookbook

I have a good friend who spent two years off the grid in India. When he arrived home in late 2015, we gathered with friends, gorging ourselves on Korean bulgogi and bowls of glassy japchae.

We kept returning to that timeless question: whether the more things change in L.A., the more they stay the same.

“For one, avocado toast is like, a thing,” I said. “Restaurants are chargin’ ten bucks for it.”

He had missed the triumphant ascendancy of the humble avocado, on its toasted throne, into the kingdom of brunch.

“How can it be a thing? You put avocado on toast. It’s what you eat when there’s nothing else to eat. Like PBJ.”

This Santa Monica native had a point. Since our market falls on Wednesday, avocado on toast was previously relegated to lunch on Tuesday: leftover ripened avocado, lemon, red pepper flakes, olive oil on crisped heels of Bezian’s sourdough, maybe topped with a fried egg.

His skepticism about a newfound ubiquity for delicious leftovers was understandable. A few weeks later, I received the text:

“i see what u mean about the avo tst”

Re-claiming toasts and tartines for the home and kitchen ought not be a difficult assimilation. After all, we’ve bee eating avocado toast all along! We’ve only gotten a little fancier in formation. As a guide, we turn to artist Josep Albers. While he played with blocks of color in his Homage to the Square, here, the blocks are ingredients in The L.A. Cookbook‘s Homage to the Avocado Toast. 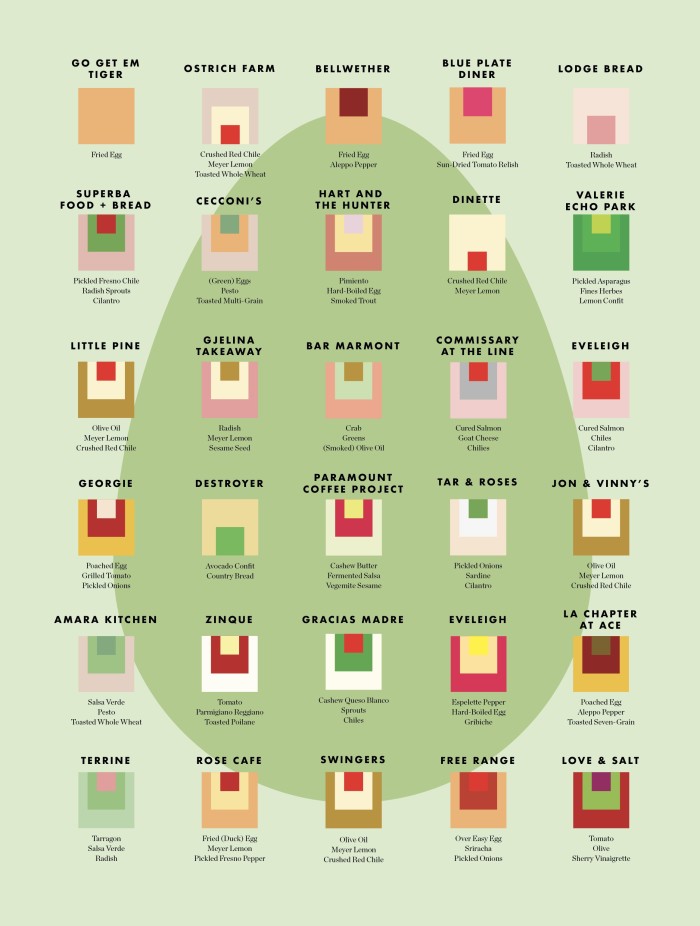