Makhana, or popped water lily seeds, have been eaten on the Indian subcontinent as a nutritious snack for thousands of years. Now, thanks to entrepreneur and crunch enthusiast Priyal Bhartia, co-founder and COO of Bohana, these little pearls of healthy, sustainable goodness have hit the market. And frankly, all we want is more.

A little background information: the water lily is an heirloom plant that sheds its seeds once a year. The small pea-sized kernels are collected for cultivation, and expand to the size of large blueberries when puffed under high pressure, revealing a snowy-white interior lightly speckled with its former seed coat. The result, as you can plainly see, is a look that screams “I’m very crunchy!”

The flavor and texture of the popped seeds themselves are reminiscent of extra-fluffy popcorn or puffed barley (“like savory Kix,” another editor suggested) with a subtle note of earthy white pepper. The crunch is satisfying, each 110-calorie serving provides three grams of protein and at no point are you subjected to artificial flavors, colors or additives. Popped lotus seeds could easily be the new, non-GMO, totally sustainable TV-binging snack you never knew you were missing. The Soulful Spice — red pepper, garlic and paprika — was the obvious winner among the three flavors for its delightful creeping heat, but both the Himalayan Salt and Wild White Cheddar varieties were immediately devoured as well.

We spoke with Bhartia for the low-down on this popular, inexpensive and all-around fantastic snack from her childhood, available on Amazon for fans of the crunchy and salty.

Are water lilies and lotuses the same thing?
The water lily and lotus are separate plants, but are confused for each other because of their similarity in the way they look and where they are grown. Even in India, people confuse them due to the error in translation of the plant’s name from Hindi to English. There are several brands in India and in the US that still wrongly describe the product as ‘lotus seeds.’

How do you source your water lily seeds?
We source them seeds from farms in Bihar, India. We have a differentiated model wherein we source directly from the farmers, cutting out the middle-men. We are directly involved in all aspects of sourcing which allows us to ensure fair wages, a sustainable and ethical supply chain and sourcing of the highest-quality seeds.

Are water lily seeds sustainable?
The cultivation of lily seeds doesn’t destroy the eco-system — the whole cycle is sustainable, seasonal and naturally occurring. 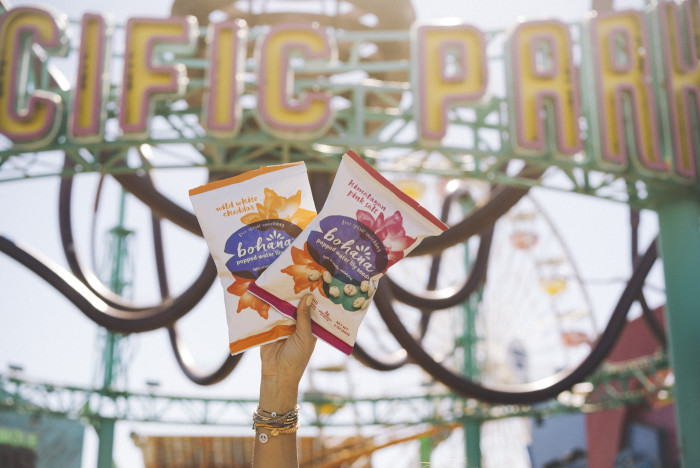 What’s the puffing process like?
The seeds are puffed mechanically through a machine that can be divided into two parts, the roasting unit, and the popping unit. The roasting unit is essentially a thermal heating system with a conveyor mechanism to pass the roasted seed towards the outlet. The popping unit hosts an impeller which breaks down the hard shell by applying pressure, making the roasted seed pop.

How are they eaten in India?
In India, the seeds are eaten mainly in their popped form as a snack. Families buy the popped seeds from the market and roast them on the stove-top with ghee, salt, and Indian spices. Increasingly now, there are many ready-to-eat flavored versions that have been introduced in the market.

What are some ways, besides snacking on them, to use them in cuisine?
The popped seeds can be eaten in several other ways, by grinding the popped seed into flour and using it as an ingredient in bread, porridge and desserts. The popped seed can also be used in curries as a vegetable.