Opening soon in independent theaters around the country, Ramen Heads follows the days leading up to the 10-year anniversary of chef Osamu Tomita’s small Tokyo ramen shop. His cult following is so robust that he’s had to develop a digitized ticket system to streamline the turnover process in order to serve the most patrons before closing time. And for good reason — Tomita’s operation is so finely tuned that he can’t leave the shop for more than a day.

Ramen’s beginnings are humble: a hearty meal that can be made in large batches, fills you up and can be eaten quickly and cheaply. Following the Japanese defeat in WWII, restaurants and food stalls adapted the Chinese style of adding noodles to scrap-based soups and this dish of necessity was born. Nowadays, Japan is host to countless ramen festivals that read more like business conventions than lively dine-arounds. While there are dozens of famous shops to visit all over the country, each utilizing its own unique style, accents and techniques, Tomita is generally recognized as the reigning champ of garnished noodle soup. On his rare days off, he visits other local ramen shops to assess the competition. And because he really, really loves ramen.

This is a man who falls asleep next to a stack of cooking magazines and hand-blends different varietals of wheat flours from multiple parts of Japan every season to keep his noodles unique and his diners guessing. He’s far less about sticking to a recipe, working largely by sense and instinct. If a broth is too refined and lacks a complex combination of flavor notes, he says, it’s not true ramen broth.

Tomita tastes like a master sommelier, sipping loudly from a spoon and allowing the flavors to mingle with the air from the slurp in order to discern the nuances of, say, a pork and chicken broth made with meat from a certain prefecture, or even produced by a certain farmer. Or the broth made from clams and a specific kind of dried sardine from a region renowned for that particular fish. Or a broth made from bamboo shoots of a certain age, or nothing but snapper bones and salt. Some are clarified, some are cloudy, but all are crucial to the success of each shop. So important, in fact, that if you’re not tipping the bowl to your mouth by the end of your meal, something is terribly wrong.

Tomita’s own style is a thick, unctuous and highly aromatic formula known only to him. It clings heartily to the noodles, and exists in multiple colors, viscosities, ages and compositions at any given time of day or night. Tomita and his devout apprentices blend them together each day to achieve a precise balance. He spends a great deal of time — much to the viewer’s benefit — stirring ladles in huge pots of silky, bubbling liquid, analyzing the flow of broth with an eagle eye. Even his soy-marinated boiled eggs are masterpieces.

The film culminates in a collaboration between three of Japan’s most famous ramen chefs to brew a “perfect broth” for Tomita’s 10-year anniversary, served to the first 200 guests in line. Sourced from the very best ingredients Japan produces, the broth shimmers gold and silver in the bowl as though alive, swirling like a hundred tiny tempests. You need to see it for yourself.

Watch the official trailer below, and check out the website to see when it’s playing near you. Make a reservation at a ramen joint beforehand, you’ll be a brand-new level of ravenous by the time the credits roll. 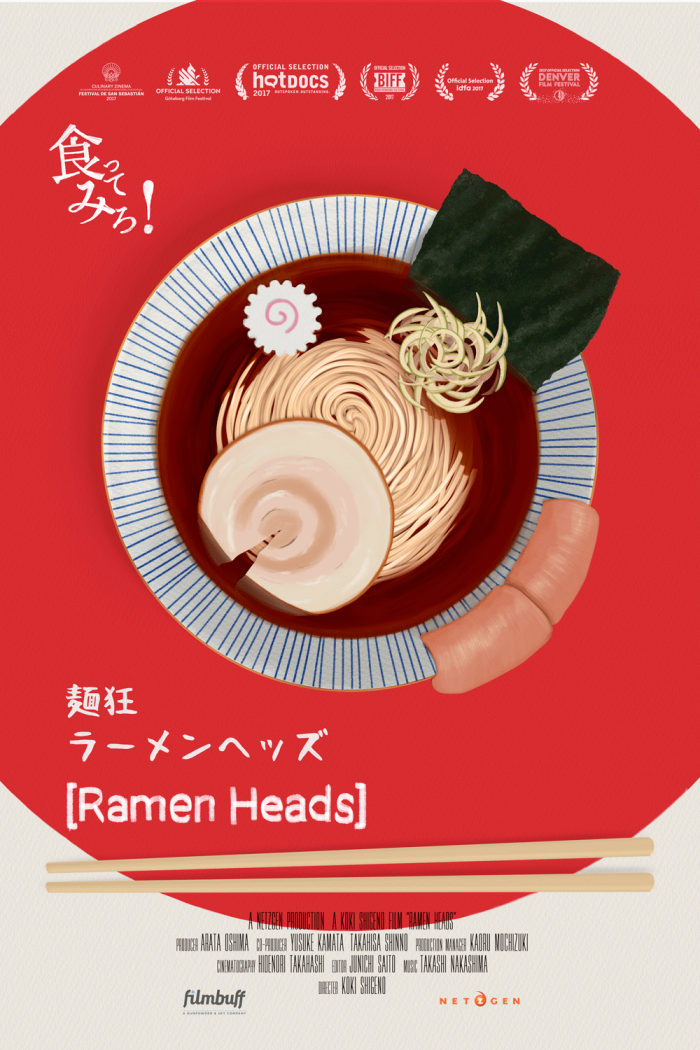