Award-winning food photographer and writer Michael Harlan Turkell’s new book takes you on a trip so powerful your head will spin (with gustatory delight, that is). Acid Trip chronicles Turkell’s extensive study of vinegar, an element in nearly every ethnic cuisine. Vinegar has been used as a seasoning and preserving agent for thousands of years, and we’re hard-pressed to think of a better deep-dive for the tart-loving food nerd. Ever wonder where balsamic vinegar comes from?

Reprinted with permission from Acid Trip

On my second day in Modena I sat in a coffee shop, next door to Hosteria Giusti, a famous salumeria (delicatessen). Both the coffee shop and the deli were established by the Acetaia Giusti family, who claim to have been making balsamic vinegar in Modena since 1605. Even within the city limits, there’s contention, and rather than embrace one another’s uniqueness, balsamic makers continue to clash over ownership of the vinegar’s origin and identity.

Whatever the real story may be, balsamic vinegar has become many Westerners’ first introduction to vinegar. The industrial production of Aceto Balsamico di Modena began in 1967, flooding the global economy with one million bottles. Today, the Balsamico Tradizionale, which is protected by its DOP (Denominazione di Origine Protetta) status, accounts for less than 0.01 percent of the balsamic vinegar produced annually. What once was made in the attics of a family’s home and reserved as a daughter’s dowry for marriage has become one of the most commercially successful — though some might say abused — pantry items in history.

Andrea Bezzecchi is the president of Reggio Emilia’s traditional balsamic vinegar consortium. In the mid-1990s when his father passed, his family possessed more than one hundred barrels of balsamic vinegar. His family’s vinegar-making legacy could have died too, but later that decade, he decided to reopen the family’s acetaia (vinegar factory). Fortunately, their land was still farmland and flush with Lambrusco grapes.

Bezzecchi and I met in the hallowed streets of Modena, an ancient city known for its fast cars and slow food. There’s no arguing that Ferrari, Lamborghini, and Maserati are all Modenese, but balsamic vinegar, well, that’s another story. It was a forty-five-minute drive out to Acetaia San Giacomo in Novellara, on the outskirts of Reggio Emilia, or just Reggio, as the local Reggiani call it. Reggio and Modena are the only two consortia that can produce traditional balsamic vinegar.

We arrived at his acetaia at dusk. I could sense fields around us, and as we approached, the whiff of fermentation greeted us from the front of the building. An exterior staircase led us up to the top floor, to the barrel room; the first thing we saw were Bezzecchi’s grandfather’s batteria (barrels), which were in such good condition that they might have been display or still in operation.

Bezzecchi quoted one of Virgil’s minor poems that mentions grape mosto, and also cited balsamic vinegar’s inclusion in Apicius’s magnum opus, considered the first cookbook, but these fragmented suppositions led me to believe that no one really knows the provenance of balsamic vinegar. Fortunately, Bezzecchi is a vinegar pioneer of sorts; he’s looking to change the consortia rule, while respecting the past. He thinks tradition can be a hindrance; that’s not to say that Bezzecchi doesn’t abide by tradition — he does — but he sees room for more creative expression.

The process for making balsamic vinegar begins with boiling down the juice of either Trebbiano or Lambrusco grapes, the two varieties allowed by the consortium, to 30 percent of its original volume. Trebbiano is used more prevalently, and happens to be a low-acid white grape, a fact that often surprises people. Likely due to a higher yield, Trebbiano makes up a third of all white wine in Italy, whereas Lambrusco, grown primarily in Emilia-Romagna and southern Lombardy, makes up significantly less by comparison. Starting from either grape, the resulting syrup, which is called mosto cotto (“cooked must,” or freshly pressed grape juice), is then aged in a series of batteria. These batteria descend in size, and are made from a variety of woods: chestnut, cherry, oak, ash, mulberry, and juniper.

A minimum of twelve years of aging is a required for any Aceto Balsamico Tradizionale, which is designated by a red or aragosta-colored label (aragosta means “lobster”). Silver signifies eighteen years, and gold means twenty-five or more. Modena, however, uses a white cap for its twelve year and a gold cap for its extravecchio, or “extra-old” twenty-five year plus. These two DOP products are the only true balsamic vinegars — by definition.

Condimento-grade balsamic vinegars, on the other hand, are made by the same process with the same grapes, but are aged for less than twelve years — usually between three and seven years. Condimento can also be made outside of these two cities. Some are even sold by reputable DOP makers — it’s just a matter of checking their integrity. Condimento is not a protected designation and it’s not well-supervised, thus it can be used on balsamic-like products, so proceed with caution. 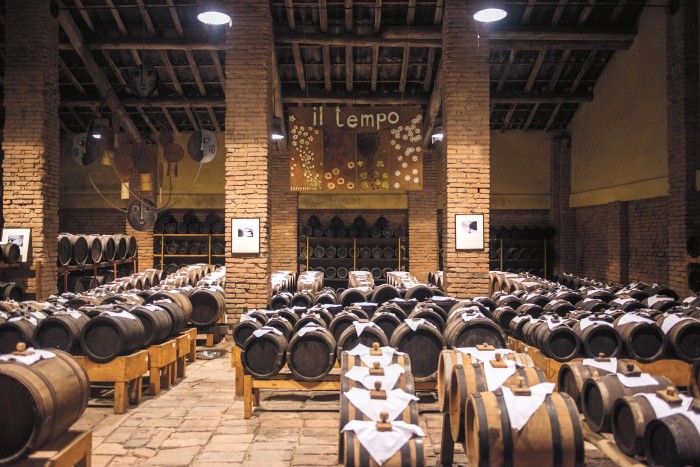 Then there’s Balsamic Vinegar of Modena, which has IGP (Indication géographique protégée) status. This is the least bona de of the three kinds of balsamic vinegar. Marked by a blue and yellow label certifying that the balsamic vinegar was “either manufactured, processed, or prepared at its place of origin,” this vinegar only has to be “aged” a minimum of two months, though no real fermentation has to happen, and wooden barrels are optional. This vinegar does not have to contain cooked must — it truly does not resemble anything near traditional balsamic vinegar, other than maybe the 6 percent acidity. It will often contain up to 50 percent wine vinegar base, with artificial sugars, caramel coloring, and thickening agents added.

And last, there’s imitation balsamic, which is a complete imposter; it can be made with any kind of vinegar base (e.g., white distilled), and it is industrially manipulated to seem like balsamic. But what this “balsamic” vinegar lacks in quality, it more than makes up for in quantity; its ubiquitousness means most people have experienced fake balsamic at one time or another. That’s not to say there aren’t any good balsamic- style vinegars made around the world (e.g., George Paul’s Emilia from Nebraska and Traditional Aceto Balsamico of Monticello, New Mexico), but authenticity is something makers of Aceto Balsamico Tradizionale pride themselves on.

There are differing accounts of the early history of balsamic. (I will skip past the likelihood that the Egyptians cooked date must circa 1000 BC and the cella defrutaria of Roman times, when wine was boiled in basement cellars.) What’s often brought up as the decisive moment in balsamic’s past is the year 1046, when monk and poet Donizo refers to Matilda of Tuscany, one of the most powerful feudal leaders of the Middle Ages, as having made a “balm” in her castle of Canossa, just south of Reggio. She presented that concoction to Henry III, who was to become the king of the Roman Empire. Though the word “balsamic” wasn’t officially used in the printing, its essence was implied, though this is still part of folklore, unverified hearsay.

Rumor has it that in 1629, when Francesco I d’Este succeeded his father as Duke of Modena and Reggio (the provinces comprised a single state at the time), he finished building what is arguably his legacy, the construction of the Ducal Palace of Modena, a Baroque masterpiece that still stands today. Perhaps an even greater accomplishment, however, originated deep within the walls of the palace: it is alleged that the west tower was specifically designated for balsamic vinegar production by Francesco himself. The word “balsamic” supposedly did not appear until 1747, when it was written on a list intended to track the movement of goods throughout the palace. Every balsamic vinegar maker has their own version of the story, and there are plenty of families who beg to differ with the above account.

Today, Bezzecchi sells a diverse array of balsamic blends, from condimento, to saba, an intentional overcooking of grape must to one-third its original volume, also known as vin cotto or cooked wine. Bezzechi’s blends challenge the antiquated notion that it’s DOP or nothing. He also makes an excellent line of wine vinegars, a well-rounded Timorasso made from a Piedmontese grape variety, a Tinto da Ânfora acetified in amphora ceramic containers, a lovely Lambrusco Viadanese of grapes grown between the rivers Po and Oglio, and a Riserva 6 Anni aged to show that even non-balsamic vinegars can mature.

Tradizionale bottles look more like an eau de toilette or cologne than a condiment — perhaps a bit too precious and pricey for those who don’t understand the nuances of how to use it. I still believe it’s worth the price tag, but age-old ways of fermentation are an investment in time that may no longer be worth the cost of production. Remember, balsamic was originally a small, regional — if not exclusively community- based — product. To scale up was an outlandish idea to say the least.

After we finished touring the acetaia, Bezzecchi, my wife, and I went out for aperitivos at his brother’s Antico Bar Roma in town, then dinner at Antica Trattoria Cognento, where plentiful bowls of ciccoli (pork rinds done right) and tortelli, enhanced by a liberal shower of Parmesan and a splash of balsamic, were trumped only by dessert. The largest piece of cheese (yes, more Parmesan!) I’ve ever seen on a dinner table appeared, with an “eat what you want” invitation.

Bezzecchi asked the waiter for small ceramic spoons, an option that was printed on the menu right under dessert but before coffee. He then filled three spoons up with generous pours of gold label, and we slurped them down. The taste of balsamic vinegar may inspire nostalgia for its rich past, but in Bezzecchi’s case, his gratification was tinged with a palpable enthusiasm for the pleasures and innovations to come.