Australian husband-and-wife duo Andreas Pohl and Tracey Lister lived in Vietnam for over a decade, where Lister runs the Hanoi Cooking Center and Pohl writes and teaches. In their newest cookbook, Made In Vietnam, Lister and Pohl share recipes for street eats, noodles, salads and more, scenes from the bustling streets of city life and a bit of history. Read all about the beers of Vietnam below!

Reprinted with permission from Made In Vietnam

Half past eight in the evening and it is closing time in the large Bia hoi behind Ho Chi Minh’s mausoleum, which locals know by its address, 19a Ngoc Ha, rather than its name. The shouts of ‘mot, hai, ba — yoh!’ (‘One, two, three — bottoms up!’) are getting fewer and further between. An hour later, the last red-faced patrons stagger out, and the staff sit down for a quick meal before the final clean-up.

This uniquely Hanoian experience dates back to 1961, when the Hanoi Brewery decided to make bia hoi, literally ‘fresh beer’: a low-alcohol, unpasteurized brew without any added preservatives — a cheap and refreshing drink for those hot summer months. Since then, the raucous, open-air beer gardens, which the brew’s success spawned, have become an integral part of Vietnam’s vibrant beer culture.

Bia hoi is collected at sunrise every morning at the factory gates by proprietors who have to accurately forecast the day’s consumption, as the beer only lasts one day. It is brewed quickly (hence the alcohol level of only 2-4%), it goes off quickly and is drunk quickly as well. The fact that bia hoi continues to ferment during the day makes for slightly different tastes at different vendors, even though the barrels might have been picked up at the same brewery. 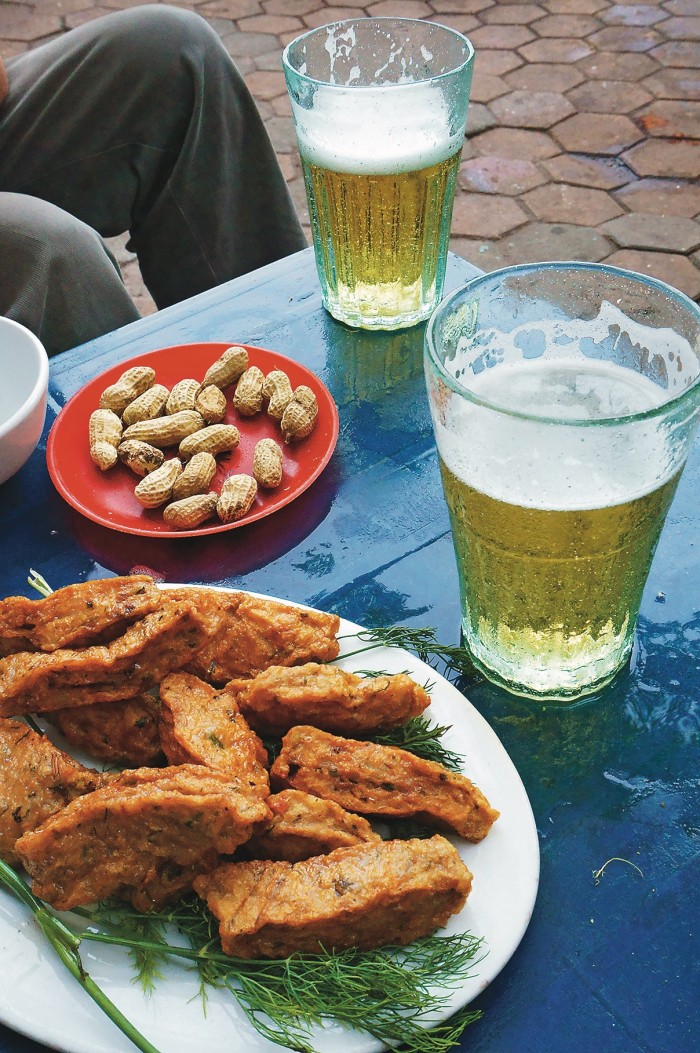 These days, two more companies have joined Hanoi Brewery and the fresh beer market is divided up between them. Bia hoi is big business: there are hundreds of major outlets in Hanoi alone, not counting the many street stalls that might just buy one or two barrels off the big players to serve on the footpath.

Beer is one more legacy of French colonial times. Initially the French were only interested in importing wine from the motherland to Vietnam, but they switched first to importing beer, and then to brewing it themselves at the end of the 19th century after a devastating case of phylloxera disease wrought havoc on the French vineyards.

In the 19th and early 20th centuries, the Vietnamese were slow to adopt the new drink, preferring their traditional rice wine. In the end, however, they turned to beer for reasons of fashion and policy. Beer made its first appearance outside French colonial society in Chinese gambling houses in an attempt to provide them with a touch of class, and it was subsequently taken up by the middle classes to show off their urban sophistication. The French monopoly on liquor also helped. Instead of switching from rice wine to the harsh, high-alcohol state-produced liquor, many Vietnamese chose beer as a refreshing alternative.

One of the beer pioneers was a decommissioned sergeant who had an interest and some expertise in brewing. He teamed up with a businessman named Monsieur Hommel to establish the ‘Breweries and Ice-Houses of Indochina’ (BGI), which included the Hanoi Beer Company (Habeco for short), and produced a brew made from local rice and imported hops. The French left in 1954 and took with them a lot of beer-brewing know-how. Under the guise of international solidarity among the newly formed socialist states, Czechoslovakia came to the rescue and in the early days of independence trained a new generation of brewers to make a Czech-style lager, named Bia Hanoi.

In the south, the famous ‘333’ beer is another example of how European traditions live on. The French brought the label ‘33’ from Germany in an attempt to introduce some German brewing expertise to France. Production soon shifted to Saigon, where the company continued to brew with German ingredients and technology, right until the North Vietnamese army stormed the city in 1975. After reunification, the new authorities nationalised the company and added another ‘3’ to the name for good luck — which obviously worked, as ‘Ba-Ba-Ba’ (333) is now one of the highest-selling brands in the country.