Just because your idea is food-related doesn’t mean it’s going to turn out delicious for everyone. That’s why we have our “Weird or Good” feature, which chronicles the misadventures of some of the strangest food and drink trends out there. Being the open-minded folks we are, it’s rare we’ll write about something that doesn’t intrigue us at least a little. Here are a few that had us right on the fence.

What Is The Gummy Vs. Real Food Challenge

In the never-ending quest to bring you the latest and greatest food-related videos (see: Black Sabbath ramen guy), it’s come to our attention that a particularly odd trend is afoot. The gummy vs. real food challenge requires two people, and two versions of some kind of food: one real and one made of gummy candy. Participants flip a coin to decide who will eat which one. The entertainment value, which after watching about a dozen of these I can kind of understand, lies entirely in how far you take the challenge.

So We’re Really Snorting Chocolate. Okay, Let’s Hear About It

Chances are, you’ve heard of a delicious new club drug hitting party cities all over the world. It’s chocolate, it’s inhaled through one’s nose, and yes, snorting chocolate will definitely get you high. What kind of high, you ask? Portland’s Willamette Week rolled up a hundred-dollar bill to find out.

What Is A French Taco?

We thought we knew everything there was to know about tacos. Until we heard about the French taco.

Would You Drink Beer Made With Belly Button Fluff?

Belly button fluff is a weird thing. It’s both gross and not useful and should probably be left to its own devices. Oddly, however, the Australian beermakers at 7 Cent Brewery thought this should change and brewed a batch of belly button beer. 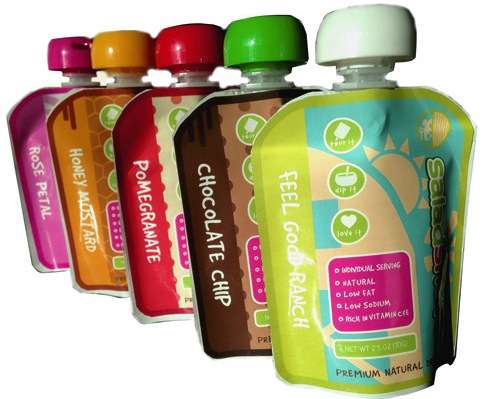 WTF Is Up With These Chocolate Chip And PG&J Salad Dressings?

We’re all for a little originality and innovation here at Food Republic, especially when it comes to sampling some pretty out there food items. Last month we sent a columnist to feast on roasted raccoon and porcupine tartare. He came away fairly impressed. I took a courageously large bite out of a chocolate-covered onion in Philadelphia’s Reading Terminal Market recently, hoping to be pleasantly surprised (alas, I was not). But, where to draw the line? We may have found our breaking point with today’s launch of Saladshots, a company producing “unheard of” salad dressing flavors, including chocolate chip and peanut butter and jelly.