Traeger is no stranger to barbecue. The venerable cookware brand has been crafting outdoor grills for over 30 years. Beloved by aficionados and professionals alike, Traeger’s wood-burning grills are a common sight at barbecue competitions and in the backyards of some of the country’s most famous pit masters. They’re also accessible to home cooks as well. With the push of a button, the grill self-ignites and is ready for use in about 10 minutes.

Their newest grill, the Timberline, is being billed as “their best ever.” It maintains all the structural integrity and craftsmanship of their other products, with the added benefit of wireless technology. Users can control temperatures and set custom cooking profiles all through Traeger’s new mobile app. The Timberline also features a modified pill-shaped barrel and is five inches taller than any other grill in their catalog, allowing space for a third interior grilling rack. In total, the larger model has nearly 1,300 square inches of grilling surface. That translates to a staggering cooking capacity of 54 hot dogs, nine racks of ribs, six whole chickens, or 38 burgers.

Make no mistake: it is the Ferrari of outdoor grills. And with a retail price of almost $2,000, it’s a fair comparison. But, is it worth it? Is a four-figure barbecue necessary to grill a few hot dogs? Of course, not! And a Ferrari isn’t required to pick up milk at the corner store, either. But anyone who buys a new Timberline to cook chicken breasts is missing the point.

Constructed of double-walled commercial-grade steel with a hopper large enough to hold 24 pounds of wood pellets, Traeger grills are designed to perform long, slow cooks even in unforgiving conditions without losing significant heat.* It also means they are heavy. Very heavy. So heavy, in fact, that they are loaded onto a pallet and shipped via freight. If you’ve never received a freight shipment before, be prepared. The packing slip for my Timberline noted a total weight of 382 pounds. The grill itself is a heavyweight, clocking in at 213 pounds for the smaller model. On a positive note, if the apocalypse comes and my building goes up in a wild inferno, I’m certain the Timberline will survive us all. 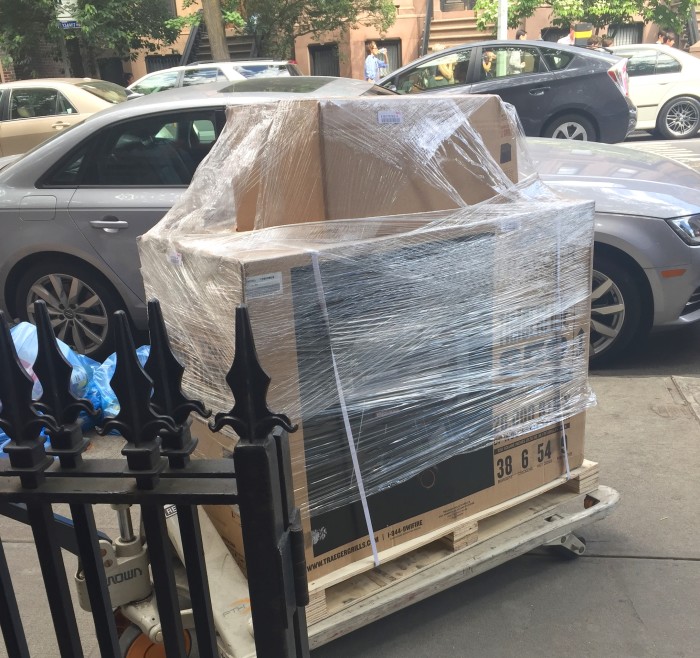 Maneuvering the Timberline up the four flights of stairs in my Brooklyn brownstone was a Herculean feat. Once on the roof, however, assembling the grill was relatively easy. It does require two people, but the main chamber is fully assembled, so it’s simply a matter of attaching the legs and standing it upright.

Although Traeger makes grills, the Timberline is essentially an outdoor convection oven and smoker. There is no direct heat. The hopper auto-feeds wood pellets onto the auger conveyor and into the fire source. The flame is hidden below a large steel plate. As the pellets burn, the plate diffuses heat evenly while the rear fan circulates the heat and smoke throughout the barrel. It makes for excellent low-heat smoking conditions and replicates the effects of an oven on a convection setting. But since there is no direct heat, the Timberline risks sacrificing grill marks.

The Timberline performs best below 250F. The lower the heat setting, the slower the pellets burn, thus creating more smoke and more flavor. I’ve never had more flavorful sausages and bratwursts, period. The combination of the smoke flavor from the wood chips combined with the low temperature thresholds created juicy, savory sausages with an audible snap (!) that is nearly impossible to achieve on a standard grill. Chickens need nothing more than a generous layer of salt; the smoke does the rest (I recommend hickory.)

Below 225F, the Timberline has a “Super Smoke” option which produces extra smoke for additional flavor. After cooking a six-pound pork butt, countless sausages, three whole chickens, and two racks of ribs, the Super Smoke option proved invaluable. About one hour into the cooking time, I activated the Super Smoke for a little extra push (for roughly 15-45 minutes depending on the protein), and the results were sublime. The ribs had a perfect pink ring without being overpowered by the smoke flavor. The chicken adopted a deep, golden brown sheen.

Once you embrace the unique attributes of the Timberline, you realize anything is possible. Pizzas, brownies and cakes, meatloaf, holiday prime rib, even shellfish dishes cooked in a conventional oven can be executed, if not improved, with the Timberline. With a little imagination, the grill becomes a bona fide outdoor kitchen, capable of smoking, baking, roasting and (with the help of a Dutch oven) even braising.

The Timberline maxes out at 500F, but if the ambient temperature is warm, the internal temperature will be even higher, which is ideal for pizza. Exceptional pizza is a difficult balance of textures and requires high heat — professional pizza ovens can reach 700-800 degrees Fahrenheit. I placed a pizza stone on the lower grate and let it preheat with great success. The pizza was divine. However, the Timberline burns through wood pellets faster as the temperature increases — up to 3 pounds per hour at high temperature — so be mindful.

In my limited experience, grill marks have been elusive. There have been some misfires, including failed attempts at grilled corn salad and a woefully underwhelming seared flank steak. After several phone calls with Traeger’s much obliging in-house chef and support team, I’ve been reassured that the grill can in fact produce grill marks like a traditional charcoal or gas grill. It requires preheating the grill to 350F or higher and dropping the lowest grill rack as close to the fire plate as possible. I did both of these things, but found that the heat fluctuated too much when I opened the door. I readjusted and set the temperature to 500F and allowed the lower rack to get as hot as possible. It worked! The temperature fluctuations were less of a concern given the higher overall temperature, and the hotspot near the back of the barrel charred burger patties and zucchini beautifully.

The Timberline has been great fun to use and makes entertaining for a crowd much easier, but there is certainly a learning curve. This is not a one-trick pony and like any advanced piece of equipment, it takes some patience and finesse to master. Wet pellets, and even too much dust, will cause operational hiccups and prevent the grill from reaching higher temperatures.

It’s also prone to what Traeger terms “tunneling out.” This happens when pellets stop moving from the hopper into the conveyor to be burned. After two turns of the auger without pellets, the flame will turn off. If you’re in the middle of a 12-hour pork butt, this can be the kiss of death. Tunneling out can happen when the hopper isn’t full enough and there isn’t sufficient weight pushing the pellets down into the auger. Or, more seriously, it could be indicative of a design flaw in the hopper itself. There is a funnel at the bottom of the hopper — perhaps it’s too shallow?

My Timberline has unexpectedly shut down three times because of tunneling out. After some frustration and choice profanity, I emptied the hopper fully, cleaned out all dust and refilled with new, dry pellets. I also regularly monitor the hopper now and swirl the pellets around just to ensure they are feeding down the hopper funnel. Online forums also suggest using cooking spray or a small amount of oil to grease the funnel and/or pellets to help them slide down into the auger.

I haven’t had any additional issues since, but I also haven’t attempted an overnight cook yet. One of the Timberline’s selling points is that it can maintain low temperatures unattended for hours on end in order to achieve proper barbecue. I can only speculate, but if the hopper needs to be checked every hour or so, this undermines one of the grill’s core functions. I’m also still hesitant to accidentally burn down my building, so I may hold off on the overnight cook.

At times, the Timberline can be finicky. It can be easily affected by seemingly innocuous problems, like damp pellets or failing to check the hopper. But like any high-performance tool, achieving optimal results requires some practice and understanding the machine’s finer points. I also appreciate the relative ease of use: the Timberline self-ignites with the push of a button and has a shutdown cycle that burns any remaining wood pellets in the fire box, ensuring a clean start with each subsequent use. The massive grilling area and flexibility with cooking temperatures and methods also makes it an asset for parties or cooking for a crowd.

I’m in it for the long haul with my Timberline and I fully expect to have a few more flops. But, I also know that the Timberline is one of the only grills that operates at both ends of the spectrum. It will create a competition-worthy pork butt or brisket, or juicy weeknight burgers. For that, I’m willing to tolerate the grill’s occasional mood swings.

Not every home cook is as tolerant as I am, nor should they be. If spending 12 hours cooking some beef sounds insane to you and chatter about augers and wood pellet varieties causes your eyes to glaze over, then the Timberline is perhaps not for you. But, if brining and slow smoking a whole Thanksgiving ham is your idea of a Fun Project — and you have a few grand to spare — then look no further than Trager’s online store.

*Author’s note: Traeger grills can withstand temperatures below 32F, so diehard cooks can successfully slow-smoke a 12-hour brisket in a blizzard. Traeger even makes a fitted insulation blanket, so your grill can stay nice and cozy.