Ever thought you might want to become an ice cream entrepreneur? With all the premium, super-premium and ultra-premium ice creams hitting the market, it’s a crowded field, but Pooja Bavishi has used an Indian twist to set her ice cream company apart. The North Carolina native is founder and CEO of NYC’s up-and-coming Malai, and recently landed a stand at the new Brooklyn location of the city’s popular Gotham Market food halls. The Indian-influenced confections are winning hearts and palates with flavors like masala chai, ginger root and lemon cardamom, plus mind-blowers like palm sugar with tamarind caramel, golden turmeric and sweet corn saffron (photo above).

flavors change weekly, but rose with cinnamon roasted almonds is always around 😋 stop by @gmashland to try our most popular flavor of #malaiicecream or try something new this week! 📷: @miyeyesseethis

Bavishi and I sat down over rose ice cream with cinnamon roasted almonds to talk about humble beginnings, failed flavors and how an MBA can boost a hobby into a thriving business.

You moved to New York to go to business school. How did ice cream factor in?
I’ve wanted to start my own food company since I was like a child. My very first inspiration came from Mrs. Fields.

THE Mrs. Fields? Of cookie fame?
Yeah! She used to have this TV show way back when. It was called “Debbi Fields’ Great American Desserts.” I was watching one morning, and she was baking a white chocolate cheesecake. It looked amazing, and I asked my mom if I could try making it. She said yes, if I went grocery shopping myself. I made the cake from start to finish, it was super-ugly and I remember slicing this not-the-prettiest-cake and giving it to my parents and my sister. They were all so proud of me and told me it was delicious, and I felt like I was making them happy with something that I made. Ever since, I would read constantly about how flavors worked together, the science of the way we taste and experimenting with new recipes.

How did the name Malai come about?
Malai figuratively means “cream of the crop,” so when you want the best of something you want malai. Literally it just means “cream,” like the highest-fat pure cream, so I wanted that mouthfeel with that very creamy texture.

Were you ever a blogger?
I definitely was, but I don’t have time for it anymore. I had many other interests at the time — I was pursuing public policy, social justice work and affordable housing as I maintained my food blog. I always knew eventually I wanted to start my own dessert business, I just didn’t know what that would look like. After business school, I was getting recruited for jobs and nothing was really sticking, I wasn’t getting excited the way I was hoping to.

I had a professor who knew I wanted to start my own dessert business because it was something I was very vocal about, and he suggested that it might be time. The only thing was, I didn’t have a concept. Around the same time, I was hosting my annual Friendsgiving and for the first time I made ice cream to go along with the dessert —  Indian-inspired ice creams infused with spices. My friends loved them, and I thought that this could be the concept I was looking for. So, during my last semester in business school, I went to Penn State for their ice cream course.

You can take ice cream-making at Penn State?
Yeah, they have a creamery there. It’s a weeklong ice cream course that all these amazing ice cream people have been to.

Oh, we know Jeni’s!
Christina Tosi went, too. It’s a really famous program. You learn everything about the science of ice cream, how to maintain it, the flavors, what options there are for butterfat content. At the end, I was really well-equipped with the knowledge I needed to move forward with this business idea. I was just a hobbyist at that point. Right before I graduated, I established my LLC and we debuted at the Hester Street Fair in May of 2015.

That’s a great place to debut!
They’re really kind to small businesses and you get a very diverse crowd there.

Some of whom may have even tried Indian-style ice cream before.
Right, and even though Indian or Indian-influenced ice cream isn’t a part of the premium ice cream market right now, we don’t want to pigeonhole ourselves. We’re very spice-infused and we’re influenced by global ingredients. All our flavors include a point of reference tied into this idea of a twist. You won’t get your typical ice cream here, but it will taste familiar to you somehow. That’s what I love about it. Say you’ve never had like a rose ice cream before. It’s my job to make sure it still tastes familiar.

Would you say that’s your formula for flavor-crafting? Rooted in something classic for the point of reference, then a twist?
Yes, I think the orange fennel is a really good example of that. I absolutely knew I wanted to make a fennel ice cream because fennel seeds, either candy-coated or just by themselves, is a classic way to end an Indian meal. It helps with digestion by stimulating your stomach too — this whole Ayurvedic thing. Do you know what thandai is?

I do not.
Okay, so thandai is this drink that you have around a certain holiday in India and it’s extremely fennel-based but you also have some almonds and black pepper…

Wait wait, hang on, are you talking about bhang on Holi, that Indian holiday where everybody gets doped out of their mind on weed milkshakes?
Yes, I’ve had it without…you know, the virgin version (laughs). It’s delicious, though. I wanted to replicate that with the fennel ice cream, but even though it’s refreshing it can also be mixed with cream and stuff, it can be a little heavy. So I just thought, what can we do to like brighten this up, and citrus was what I thought of, cause orange and fennel is a super-classic combination in Indian dishes. I actually had a lot of people coming up to us saying, “my Italian grandmother makes something very similar.”

Anyway, I noticed you don’t use eggs in your base formula. Why not?
I went through a lot of different formulas before I landed on the one we use. There are two reasons I don’t use eggs: one is egg has its own flavor and the spices themselves are so beautiful, fragrant and flavorful, that I don’t want anything to mask the flavor of those spices. The other reason is because there’s a huge [vegetarian] Indian population that does eat dairy but doesn’t eat eggs. Because I’m so rooted in tradition, I didn’t want to close that off. I want it to be accessible to everyone. 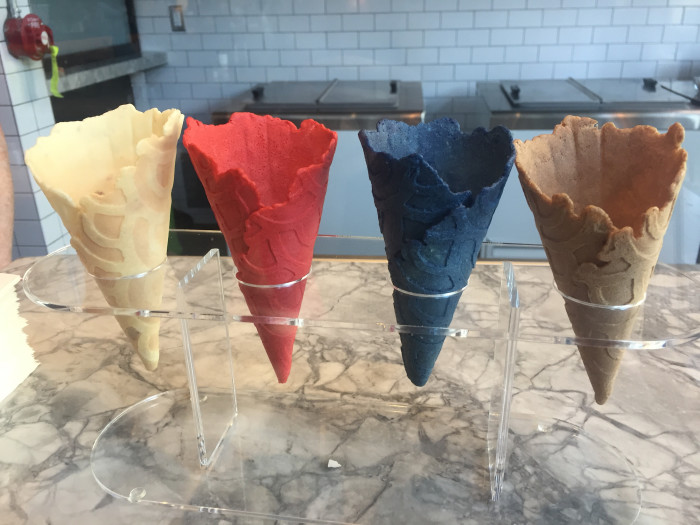 Let’s talk about these very interesting-looking cones.
They’re from The Konery, which works out of our same building. They do amazing flavored cones. A lot of ice cream shops around the city use their cones, they’re super-delicious. Today we have coconut, five-spice, blue corn and cinnamon.

Have you tried any ice cream flavors that just haven’t worked?
I really wanted to make a chocolate peanut butter curry, I tried six or seven versions and it just wouldn’t happen. Maybe it’ll work out somewhere in the future, but it was not in the stars for me right now. In concept, I can like taste the successful batch.

So you really can use an MBA to create your own successful ice cream operation, is what I’m hearing.
Well, let me tell you, I had zero acumen before I entered business school so let’s just remember that (laughs).