Chef Daniel Boulud is as uncompromising about the food served on his flights as he is about any of his 13 dining establishments*. Last year, the Michelin-starred chef became the first US-based chef to partner with Air France, joining a list of renowned figures who develop their restaurant-quality meals.

The chef joined a group of American food writers on a recent flight to Paris. Before we departed, Boulud signed a menu for each passenger in business and first class, kicking off what would certainly be the most delicious flight in memory. Think lobster and lamb chops, salty cultured butter on warm mini-baguettes, dense vanilla bean custard tart (a specialty of his native Lyon) and a generous splash of Port. In contrast, my latest flying experience starred the following amenities: $6 bottle of water, hard green banana and blanket that smelled like old French fries.

Back in New York, I sat down with the chef in his office, which overlooks the kitchen at his eponymous midtown Manhattan restaurant, and talked about why France’s national airline will never compromise when it comes to the food served onboard.

*this interview was conducted before the closure of DBGB Kitchen & Bar was announced. 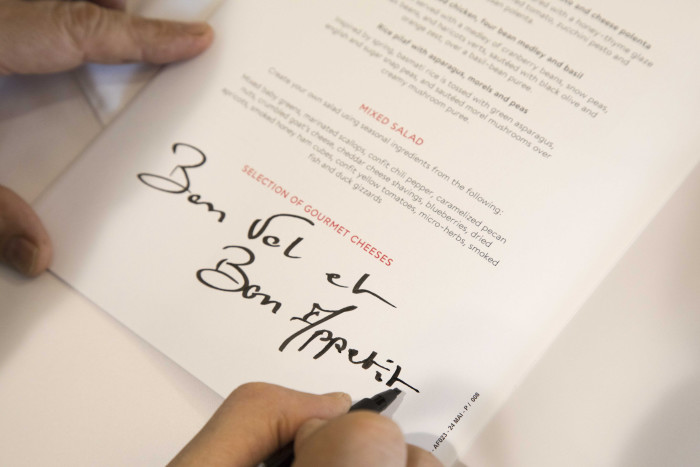 What’s your first memory of good airplane food?
I discovered good airplane food for the first time when I flew to Copenhagen about 30 years ago. I was working with Scandinavian Airlines at the time, and they served herring and a meatball dish — frikadeller with some sweet cabbage. It was delicious, and something different than French food. I also remember flying from Hong Kong to Bali in the early ’80s on Garuda Indonesia, and they served nasi goreng with shrimp and chicken. It was so tasteful, spicy and delicious. Nasi goreng is the kind of dish that can be reheated and still taste good. That to me was the ultimate kind of dish — everything was stir-fried together and it was not so much about how cute it was but how great it was.

I’ve had lots of bad airplane meals too, of course, but lots of good ones. I flew on the Concorde from Paris to New York, and you barely have time to have lunch but that was a good lunch — caviar and champagne and Dom Perignon.

Do you find that Europeans generally have the same view of airplane food as Americans: “Let’s just get this over with?”
I think airplane food will always be airplane food unless you fly private. Then you have your chef in the kitchen making your food.

What’s it like to cater private jet flights?
I’ve done many trips with customers and friends. One of the last times was with the famous French chef Michel Troisgros. We cooked scrambled eggs at 50,000 feet using little bowls in the microwave and black truffles. We served scrambled eggs covered with black truffles and warm toasted brioche, and I made an entire buffet of charcuterie and salads. So of course, traveling like this, airplane food is just like home.

“What I don’t like served on planes is that ‘cheese whiz,’ for sure. That kind of cheese packet already pre-packaged, that gives me like the creeps.”

I’m sure you’ve seen old advertisements for Pan Am and British Airways back in the day where they’d actually roll out a prime rib or stuffed turkey and carve it in front of you.
Oh yes, with a cheese cart, dessert cart. Flight attendants were very experienced servers — like restaurant servers, almost.

Do you think there could ever be a return to that era, aside from private planes?
Well in first class you have a little sense of that era still, but first class has very few seats nowadays. Everybody travels business now, planes are going faster and people have other sources of entertainment during the flight. The flights have also changed: if it’s an overnight flight, you want to sleep, you don’t want to spend your whole flight eating and drinking. But in the old days there was no entertainment other than this fabulous meal, and so people were expecting to enjoying and be entertained by this privileged moment to dine in the air.

Today, the service has to be efficient, a little quicker, and still pay a lot of attention to good service and good food. But yes, the era of the roast is probably gone.

I really enjoyed the charcuterie on that Air France flight. It seems like cured and dried meat would be an ideal thing to serve on an airplane because it’s largely slicing and presentation.
Pre-sliced charcuterie could dry and oxidize quickly, but something like chicken liver mousse served in little pots, finished properly with the necessary seal of the gelée or little bit of fat on top would be perfect. Air France serves foie gras for example, which is a form of charcuterie, but I think it’s not necessary to serve something so fancy on a plane. It’s better to give something that tastes really good, so I think a very good chicken liver mousse could be as good, with more flavor even than foie gras. If we can master the perfect little vessel to put pâté in, we might have something going.

How long has Air France been working with well-established chefs to develop their culinary program?
Air France has been flirting — I call that flirting — and having relationships with chefs for 5 decades, maybe more.

Was it the first airline to go for that model?
Oh, absolutely. From the early ’70s, chefs were always involved with creating dishes for them, working in collaboration. Air France has always had a corporate chef and a culinary director, supervising the production and consistency and all that, but they only had that from Paris to somewhere. Never from somewhere to Paris. There was one hub, one focus scattered between all the planes. Here in America you have LA to Paris, you have San Francisco to Paris, you have Chicago, Atlanta, New York, Miami, Dallas. So having relationships with American chefs is important too.

Can you tell me about the flight catering facility in Paris?
It’s always evolving and growing. They have a state-of-the-art safety program, the best research and development departments. They have architects working closely with the professionals to make sure everything is done with the most expertise. It’s very interesting — you know, all airlines have challenges with budgets. But if they would leave a little bit more budget for food, for that particular service, they really would have more rewards as far as loyalty and appreciation from customers. Especially business travelers. Air France has always understood that food was part of their DNA, and they should not let it go.

Speaking of which, how do you serve French cheese properly in a naturally cold, humidity-free environment?
I actually prefer there not be too many cheeses onboard. And as for the texture, you cannot have any runny cheese or very smelly cheese. If you put an Époisses [de Bourgogne] in a plane, you never know how far the smell is going to travel. Someone might complain.

If there’s an Époisses on a plane, the last seat in economy is going smell it.
Yeah, really. It’s unfortunate. So I like firm cheese for an airplane. A Comté or Tomme, or even Reblochon works very well. Even Camembert, when it’s not too warm or too tempered can still be okay. Triple crème works well too — not too smelly, a little creamy. Chèvre also, but not every cheese is compatible with each meal. What I don’t like served on planes is that “cheese whiz,” for sure. That kind of cheese packet already pre-packaged, that gives me like the creeps.”

What are your thoughts in general on particularly strong smells when it comes to airline food? I’m thinking of my last trip to Mumbai, in particular.
When we’re formulating a new menu, we try of course to not make the food smell, and yet still be fragrant. It’s a fine line. We do a Moroccan tagine where you have the saffron, cumin, cinnamon and coriander, but it’s mild and fragrant. With technology, we can create natural thickeners for a cross between sort of a loose purée and a sauce like a coulis. You can nourish that sauce with spice without having to have a heavy smell coming out of it. Using yogurt in sauce sometimes helps that.

As far as the meats you choose, you don’t want to use mutton for example, because it smells too much. You don’t want to use any meat like offal, whose smell gets stronger when you reheat it. There’s limitation and restriction in what you can do and can’t do in a plane. I think that of course when you are in India or flying to destinations around there, the international flavors might just be more intense. 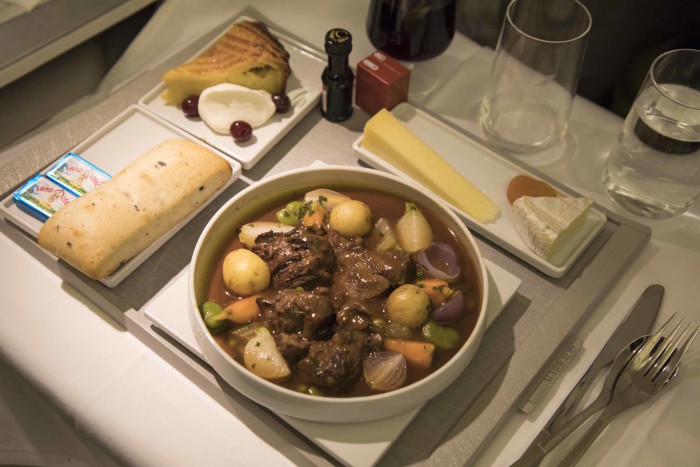 I can confirm that.
Oh yeah? (laughs) ‘Cause that’s how my nasi goreng was. Like, “whoa, this is local!” So French food doesn’t have that pungent smell. When we do a stew it’s something milder, like for example, a navarin d’agneau — braised lamb stew with lots of spring vegetables, maybe with polenta. I like those sort of homey, soothing, gentle kinds of food in an airplane. Then you can have an appetizer, or something else with a little more kick to it. 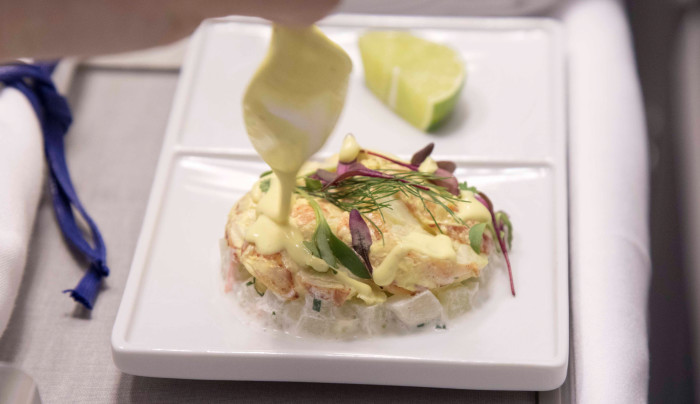 Like the appetizer I had on your flight — curried lobster salad with coconut, fennel, tapioca and ginger. It’s the best dish I’ve ever had on an airplane. There was lemongrass in the thickened sauce too, which is a universally pleasing scent and always welcome on a plane.
Exactly. Mild on the plate, but then on your tongue and in your nose it really reverberates in a way. Not so much in the environment, though.

Did you see that Air France just launched these chewing gum packs, in crème brûlée and pistachio macaron flavors? They look like little airplanes. You pop the gum out of the windows.
That’s cute! That’s very good to know.