Chances are, you’ve seen someone out and about drinking from what looks like a carton of milk. That’s weird, you say, who drinks milk out of a carton on the sidewalk? Or in the airport? The answer is “nobody,” because the contents of that box is plain ‘ol water. But is boxed water really better than its bottled counterparts? These cartons have made their way to the mainstream market over the past few years, providing an alternative to the sizable carbon footprint of bottled water, and Boxed Water is at the forefront. Good name, right?

Established in 2009 by design-focused entrepreneur Ben Gott, the Grand Rapids, MI-based company’s sleek white boxes can now be found all over the country. Their model of filling flat-packed cartons with purified water at their distribution sites cuts down on freight cost, and the cartons themselves are recyclable and made of 100% recycled materials. Even better, Boxed Water’s Retree partnership with the National Forest Foundation’s 1% For The Planet campaign means they’ll be planting a million new trees in forests nationwide over the next five years. Anyone planting plastic bottle trees anywhere? Nope, because that is a made-up sustainable resource. In fact, after speaking with CEO Daryn Kuipers while he visited Food Republic HQ recently, we were convinced that it’s beyond time to make the switch. If you don’t have a reusable bottle handy, that is.

Do you think boxed water is a step in the right direction when it comes to more sustainable everyday hydration?
It’s really just for when you need to have water on the go. In our culture it’s too easy to have convenient water and convenient products in general. It’s still always better to have refillable water containers, but if you need to buy one instead, this makes a statement. People are so into fashion and design, they oftentimes will buy water because of the design on the bottle. We think the carton looks even better.

How did you land on the carton’s ultra-minimalist black-on-white design?
Our founder Ben Gott really honed in on the simplistic side of the packaging. Everyone knows blue means water — and white means milk, of course — but if you look at an aisle of water bottles and Boxed Water’s in the middle of it, it definitely stands out. We didn’t want to be like everyone else, because we are different. When people see it, they wonder “what does it taste like, why is it better?” I just like to let people experience it. You can see their minds turning, then they think “hey, it’s made with a renewable resource, so it is better.” It also doesn’t get as slippery from condensation, and it fits perfectly in your hand. Ergonomically, it wants you to hold it.

What brought about your partnership with the National Forest Foundation?
Boxed Water has always been focused on making water better, so we partnered with the National Forest Foundation’s 1% For the Planet. We guarantee that 1% of our top line sales will go towards environmental causes. A lot of times companies say they’ll donate some of their some profits, but really, officially, what is that? We did research and because of their transparent process, they became the partner we chose. They audited our financials to confirm how much we made in sales, then we showed them we donated X amount back and they confirmed it was at least 1%. We also set out on a mission with them to plant one million trees by 2020, and we’ve already planted half a million. For a small, young company, we feel pretty good about that. 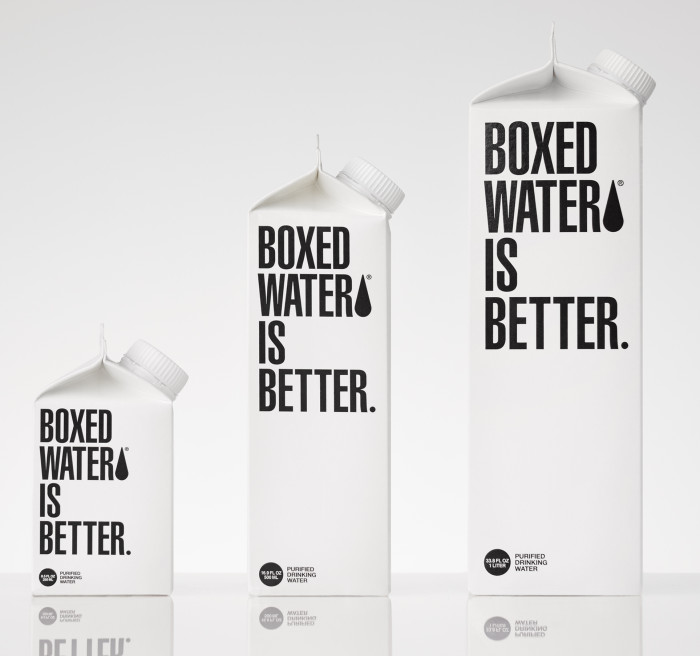 Has there been any backlash to this packaging from people who are attached to the idea of water in bottles?
Wherever I go, people ask me “what are you drinking?” For us, it’s about beginning the conversation of “how could drinking water be just a little better?” That’s what we’re all about, making people ask the question “what’s in that box?” so we can say “it’s water, just purified water in a cardboard box, and it’s a more sustainable way to consume.”

Can your packaging really be 100% sustainable if it still comes from trees?
It’s fully renewable: all our trees are from sustainable forests and we’re replanting with Retree. Nobody in the plastic bottle business can say that. There’s a study being done to compare our product with PET and plastics. We’re not there yet, but we believe we’re going in the right direction. We were actually make way more cartons out of these trees than we thought.

Tell me an experience you had that made you realized Boxed Water was really working for people.
The growth we’ve had so far is amazing. We were in a warehouse we grew out of and just moved to an office space in downtown Grand Rapids, which is a whole other experience in itself. I had a friend who was driving through Nebraksa to Utah, stopped a a gas station and found Boxed Water. I had no idea how it had gotten there. I got the same thing from someone down in Mexico, they’d seen the product and told me about it. About three years ago I was traveling with my wife, and on CNN in the hotel room they were comparing our water to two other waters. How did they even get it? They didn’t reach out to us, they just found it out there on their own. It’s really fun to see people interact with it, and to see in places you wouldn’t expect.