Chances are, you know Food Republic’s passion for food infographics very well. Our global hot dog graphic alone is worth its weight in…well, hot dogs. Author Laura Rowe compiled a whole book of creativity-stimulating illustrations to school you on a variety of topics, like the world of blood sausages out there. Freshen up your food knowledge with Taste, and impress your dining companions.

Not all ingredients are made equal but blood, so often seen as a byproduct of the meat industry, is certainly one undervalued. A rich source of protein and iron, it is the foundation of sausages around the world – from Britain’s spicy breakfast favorite “black pudding” and Spain’s soft “morcilla” to Estonia’s Christmas banger “verivorstid.” Its strong metallic flavor means it stands up well to punchy spices and herbs.

The Maasai tribe of Tanzania likes to drink blood straight from the cow’s neck, mixed with milk, while Inuits prefer downing seal blood. Asia tends to use duck or pig’s blood traditionally; whether set and sliced like tofu in China; combined with rice, steamed and seasoned into savory cakes as street food in Taiwan, or chilled and coagulated in a raw soup as in North Vietnam.

In Europe, the Polish combine duck blood with the meat of the bird, spices, dried fruits and vinegar for a warming czarnina, while Italians mix theirs into a sweet chocolate pudding flavored with orange and cinnamon, called sanguinaccio. It’s also a natural thickener for sauces and stews – old school French add it to coq au vin.

The Finnish choose to eat their blood sausage with lingonberry sauce and are famous for their blood pancakes, which are served across much of Scandinavia. Indeed, research in 2014 by the Nordic Food Lab showed that many dishes featuring eggs could actually use animal blood as a replacement. Both feature albumin proteins and so react in a similar way when exposed to heat or with the introduction of air through whipping – we’re talking meringues, macarons, pasta, custard, ice cream and even cakes, all taking on a suspiciously darker hue…

Reprinted with permission from Taste: The Infographic Book of Food 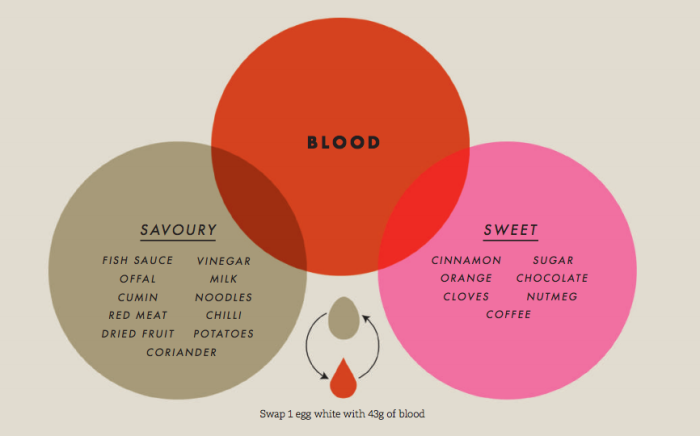 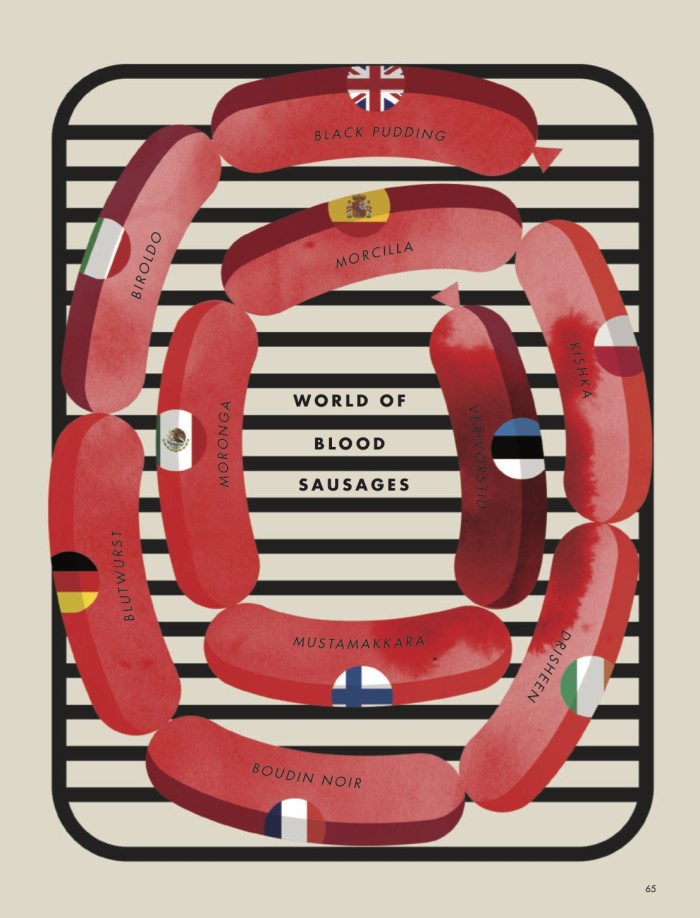