Rice is a friendly side dish or accompaniment that’s easy to make and on the table quicker than almost anything else. Tonight, we’re taking this much-loved grain for a spin around the neighborhood. Well, neighborhoods! We have lots of creative rice dishes from all over the world, from Italy, Spain and the U.S. to the Middle East and of course Asia. Pick your grain — long or short — and get cooking!

Rice timbale is an elaborate layered dish from eastern Sicily, which is said to derive from Catania during the time of the Arab occupation. There are probably hundreds of variations on timbale; some are made with penne, and I have seen ones made with spaghetti. In fact, it is a good way to use up leftover risotto or pasta. And do try layers of roasted aubergine (eggplant), flavoring the rice with saffron or adding cooked mushrooms, for a few ideas.

In my entirely unscientific recent survey, approximately 63 percent of Chinese takeout/delivery white rice gets thrown out after a couple of days in the fridge. That’s why this recipe is doubly pleasing: You get to use up that rice, and the result is a beyond-crispy cake that adds texture to anything it’s served with.

Ume plum vinegar is available at gourmet supermarkets, health food stores, and online. If you cannot find ume plum vinegar, use rice vinegar. The pickled radishes taste great by themselves and would make a nice side dish, or use the slices to garnish your onigiri, as I’ve done here. I use beet to dye the radish pink. You can omit that step.

This dish always makes me think of the heady ocean-infused perfume that rises when cockles or clams and parsley are mixed together. Salty and clean is the only way to describe it. In the Basque Country, you don’t need to buy parsley for your fish. Because fish is never eaten without parsley and is rarely eaten with anything more than that, parsley comes courtesy of the fishmonger.

Tahchin means literally ‘arranged at the bottom,’ referring to the layering of meat and rice to form a thick tahdig (crust) at the bottom of the pan. It is a very popular rice dish that can be made with either lamb or chicken. Some versions contain spinach or aubergine. A good, thick tahdig is the distinctive feature of this rice; to obtain that, traditionally the rice is mixed with egg in addition to yogurt.

Forbidden rice is always beautiful, but this one is especially so, flecked with bright green cilantro leaves and golden peanuts. I love the way this dish elevates an easy stir-fry of vegetables, tofu, or fish to a special meal.

I may never how to make authentic Singaporean chicken rice, so I decided to create a contemporary spin on the ubiquitous Singaporean dish by fusing it with one of my favorite all-American applications: the chicken wing. 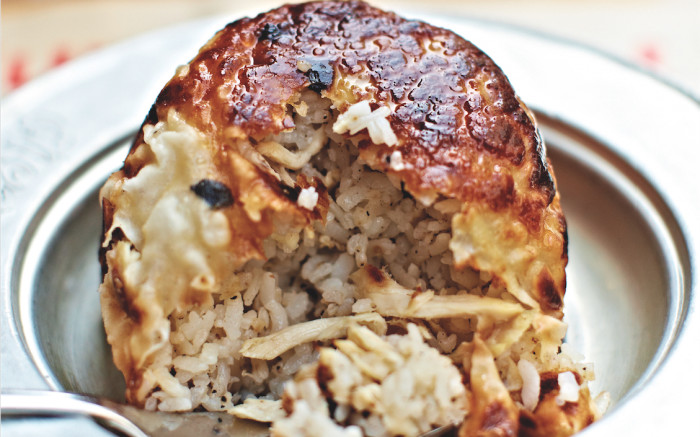 Perdeli pilav means “veiled pilaf,” and it’s a dish found on many restaurant menus: a delicious chicken and rice pilaf encased in pastry dough and baked in tin molds until golden brown. It makes a great dinner party appetizer or midweek meal if you’ve got some leftover roast chicken to use up. Often the pastry crust is also studded with almonds.

This dish seems so wrong and dirty in the most delicious way possible: a cookie-crusted, deep-fried pork chop over fried rice, covered in a rich sauce and melted cheese. It’s a product of cha chaan teng (diner-like and tea restaurants) that were meant to appeal to the taste of visiting Westerners, offering Chinese-ified Western food (as opposed to the Americanized Chinese food found in the United States today).

“Invest in a wok. They’re pretty cheap. Oh, and if you don’t have a gas stove, don’t stir-fry,” says chef Jamie Bissonnette. “The biggest tip I have for stir-frying is recovery time. When you add something to the pan, you drop the temperature. Keeping everything room temperature will help, then as you add something, let the pan get hot again and don’t be afraid if you see it’s blackening and crisping. Let it happen.”