Great news! Five thousand craft breweries produced about 25 million barrels (or 775 million gallons) of delectable beer in 2016. And while that number is very exciting, the good folks at San Francisco–based startup ReGrained are thirsty for the potential opportunities this deep-rooted industry presents. Crafting all that beer means there’s a lot of spent brewing grain left at the end of the process, which cofounders Dan Kurzrock and Jordan Schwartz set out to rescue and repurpose into granola bars that are as delicious as a freshly pulled pint.

Back in their college days, Kurzrock and Schwartz were homebrewing hobbyists who became aware of just how much raw material the process required — roughly a pound for every six-pack. At the end of the brewing process, this grain is termed “spent,” meaning that its sugars have been consumed by yeast and its usefulness (at least from a beer-production standpoint) has run its course. They noticed that this byproduct actually smelled pretty good and appeared to have an oatmeal-like consistency, so they started baking bread with it and selling it to their friends and classmates to support their homebrewing.

Their spent grain recipes soon expanded to include granola bars, with the mix containing an amount of protein similar to almonds, three times the dietary fiber of oats and a low sugar content (due to the brewing process having already stripped the sugar away). As their operation grew, the team expanded their beer grain harvesting to extend beyond just what they produced as homebrewers, and focused on giving urban craft brewers an upcycled outlet for their byproduct.

It’s not that those brewers were being wasteful, mind you — many brewers already maintain relationships with local farmers to utilize their brew grain as livestock feed or for composting, but this can be especially challenging for city-based operations. As ReGrained has facilitated the repurposing of these brewers’ spent grain, their own product list has expanded to include granola bars, chips and possibly in the future, the milling of spent grain to make ReGrained flour.

This got me thinking something along the lines of, “Well, I’ll just swing by my local craft brewery and ask to take some of their spent grains off their hands for my morning oatmeal.” Kurzrock cautions that while people can do this, “Really important food safety considerations definitely need to happen. We’re talking about making a food-grade ingredient out of an industrial process. When it comes out of breweries, it’s very hot, which is good because that means nothing is living in there, but it’s also really wet.” He goes on to explain how the core of ReGrained’s business lay in the R&D of mass-stabilizing the grain such that it produced a food-grade ingredient.

“As soon as that temperature starts to come down, you get microbial activity happening and it basically starts to rot. You’ve got a matter of hours before you need to stabilize it,” he adds.

With all this information at hand, I dig into their Honey Almond IPA and Chocolate Coffee Stout granola bars. The chocolate coffee stout is really awesome, with the chocolate appropriately nuanced to balance with the other flavor components without overpowering. There is a nutty flavor from the almonds and flax seeds, subtle sweetness from the honey and just a sprinkle of sea salt. The essence of the spent grain is front and center, barley husks and all, which provides a satisfying sensory experience. As I snack happily on the chewy treats, I think of the fields where the grain originated, the brew it had created and all of the character its journey was now imparting to my palate. 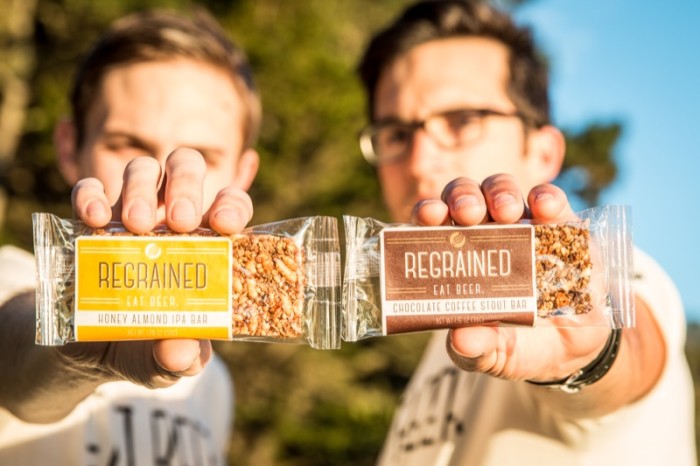 You can currently only buy ReGrained products in the San Francisco area, but the ReGrained website sells many a beer-drenched morsel, ready to ship! Now, back to where this whole thing started: imagining where the spent grain from 775 million gallons of beer can take us next.