It’s mid-July and, as is common with food publications whose staffers adopt strange eating schedules due to editorial deadlines, I’m working on Thanksgiving recipes. Specifically, I’m deep-frying turkeys. My landlord should appreciate that, for once, I’m testing out hazardous cooking devices in the safety of my family’s home in Texas instead of the precarious rooftop of my aged Brooklyn walk-up. Should things go terribly awry and any permanent structures were to catch fire, I’d much prefer it be one standalone garage in Texas instead of a multi-unit brownstone in New York.

The risk of fire is actually quite low, because the fryer in question is the “Big Easy” oil-less fryer from outdoor grilling giant Char Broil. It promises a “deep fry” without the fat, calories, grease and fire hazard of traditional frying. It also touts ease. Deep-frying a whole bird can be quite the undertaking, from procuring an industrial-size pot and secure heat source to the small fortune you’ll spend on peanut oil. The Big Easy purportedly replicates the effect of indulgent deep-frying without the hassle.

It sounded almost too good to be true. Without the oil, would it taste like a decadent, juicy fried Thanksgiving miracle? 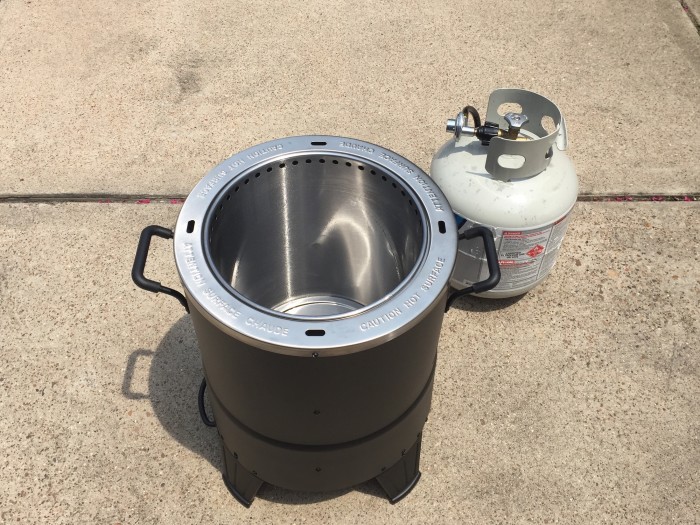 I empty the box and am immediately thankful my ever-handy father is nearby. The assembly instructions are confusing, and there are a lot of parts, exclamation points and ALL CAPS hazard warnings about propane-tank connection points and potential gas explosions. After a full hour of assembly, which requires a tool box, we are left with one superfluous piece (of course). We ignore it and hope it’s not related to the underlined and embossed safety warnings in the manual.

In the past when we’ve deep-fried turkeys for the holidays, we’ve used a propane tank hooked up to a freestanding burner with a pot on top. This is effective because the industrial burner puts out enormous power, but it means there is a very large, open flame heating a vat of hot, flammable oil with a hot turkey inside it. The Big Easy also connects to a propane tank, but there isn’t an open flame anywhere in the appliance. Failsafe #1. It works by using what Char Broil has termed TRU-Infrared technology. The infrared coils hover above the heat source, distributing heat evenly to create a more stable, evenly heated cooking surface without hot spots. In the case of the fryer, which is an open-top cylinder, the round shape acts like a funnel to trap and reflect the radiant heat from the coils inside, creating an oven-like setting. The high temperatures formed in this compact vessel — with the heat bouncing off the reflective inner compartment — create an environment where food can sizzle and crisp without requiring gallons of oil. Failsafe #2.

A note on defrosting: It is imperative that you use only a fully defrosted turkey that has been brought to room temperature. I cannot emphasize this enough. Most frying-induced fires result from partially frozen turkeys, which contain large amounts of water and ice. Oil + water = fire. Bringing any raw meats up to room temperature first also helps the meat cook evenly. 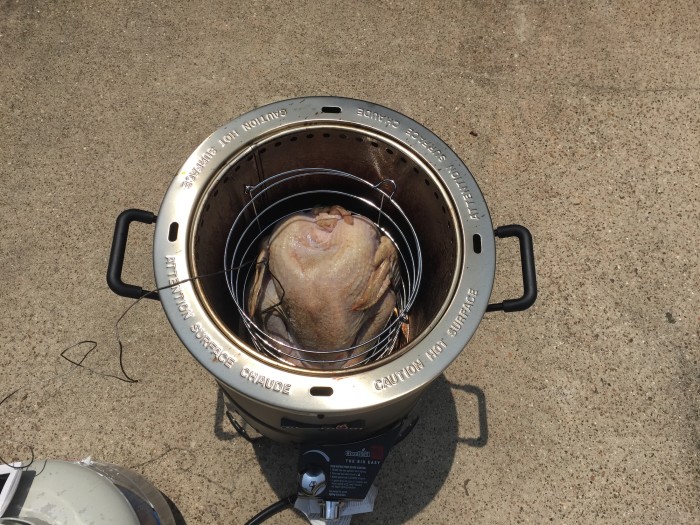 I prep the turkey simply — generous salt and pepper — place it into the fry basket and lower it into the belly of the fryer. And that’s it. Reluctantly, I walk away, feeling like I should be fretting and obsessively looming over the fryer, stalking it for the slightest indication of temperature fluctuation or impending explosion. But the turkey is humming along, cooking nicely and evenly from what I can see. The skin starts browning and bubbling after about 45 minutes.

After two hours, I probe the bird to find it’s reached the ideal inner temperature of 165°F. I retract the bird, remove it from the basket and let it rest. It looks tasty. The skin is evenly browned and crisped; it looks juicy. But I’m skeptical. How could it be cooked after only two hours? Oven roasting requires four to six hours, depending on size. Proper deep-frying can be achieved in under 90 minutes, but it has the advantage of simmering in hot liquid, which greatly expedites cooking time. 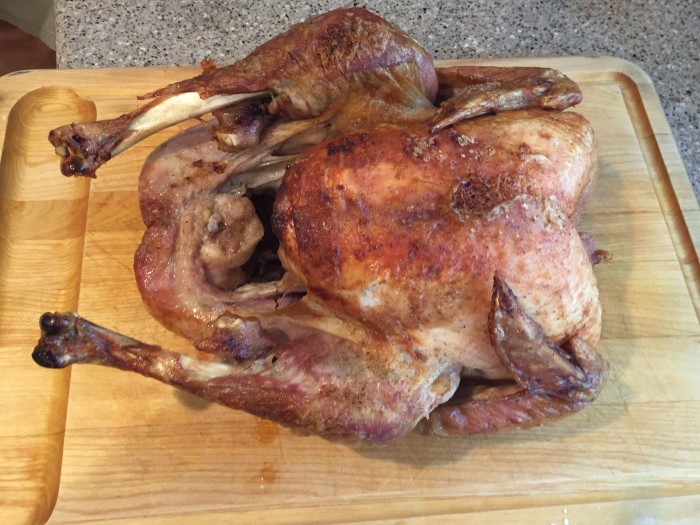 I slice into the rested bird to find it’s salty and perfectly cooked, moist and savory. The skin isn’t quite a deep-fried level of crispiness, but the layer of fat immediately underneath the skin has rendered, leaving behind a thin, browned exterior. On a spectrum of crispiness, the texture is far closer to frying than oven roasting. Yet despite being juicy and dripping in fact, something isn’t quite right. The meat is tough. It’s almost as if the fast cooking time hasn’t allowed for the dense flesh to slowly break down and transform into soft, tender meat. I used a generic store-bought bird, so I worry it’s the turkey itself. I retreat to the freezer and remove a second, overachieving turkey. This one is an organic, free-range, heirloom bird from California. It’s the Rolls Royce of turkeys. I leave it out to defrost in hopes that tomorrow’s attempt will yield better results.

Another day, another turkey. Armed with a stiff Bloody Mary, I repeat yesterday’s process to a T. I remove the turkey from the fryer and it looks crispy and exceedingly juicy, but again it cooked in well under three hours. I let it rest and, with a deep breath, slice into the white meat first. The bird is notably tastier with a more pronounced turkey flavor — evidence of high-quality sourcing. And again, it is perfectly cooked, moist, salty and dripping with juices. However, the meat is still tougher than I would prefer. It isn’t ruined by any means. I’ve certainly had dry, bland turkeys that were diligently oven-roasted for hours. It’s an odd predicament, really. I’m thoughtfully chewing a piece of thigh meat, wondering how I’ve achieved such an ironic combination of results. It is by all other standards a perfectly cooked bird, but the texture of the meat is not the melts-in-your-mouth luxury you expect from deep-frying. 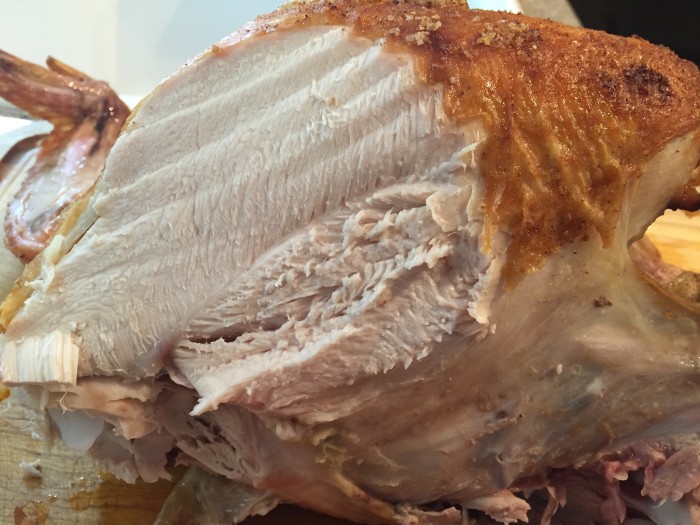 I find myself standing at the kitchen counter, drink in one hand, fork in the other, with a half-carved turkey before me on the cutting block. I pull apart a combination of white and dark meat and assemble a turkey sandwich. It is sublime. Any contemplations of cooking method vanish as I sink my teeth into the first of three sandwiches I will eat over the long Texas weekend. The Big Easy may only deliver a turkey that is 80 to 90 percent of its advertised “deep-fry,” but it did it without the time-consuming labor of roasting or the messy hazard of deep-frying. And now I have a bounty of savory turkey to tide me over until actual Thanksgiving.

*To clean, empty the grease trap on the bottom of the fryer and, once cool, wipe down the interior with a damp towel. Like outdoor smokers and cast-iron pans, the fryer gets better with age, developing an inner patina of flavor with each use. Just be sure to wipe down excess grease to avoid fire.