In the bright green hills of Boveresse on the border of Switzerland and France, down a sleepy street lined with cobblestones, in an old, dusty house, you will find Philippe Martin quietly distilling absinthe. This is where Absinthe la Valote Martin is created, and the 45-year-old has been making the spirit since 2014. Martin took over the business from his father, Francis, who ran a clandestine operation during the almost century-long absinthe ban.

“One of his uncles gave him the recipe,” says Martin, in a thick Swiss-French accent. “Dad made it during the ban and could only do it when it rained, so the neighbors wouldn’t smell it.”

Though Francis started making absinthe in 1972, the spirit’s ties to the area date back to the 18th century, when this quaint village was known for growing wormwood, a key ingredient in absinthe distillation. In 1761, the first absinthe distillery opened in a local château, and by 1740 business was booming, employing many people in the town. Absinthe went out of favor in the early 1900s, when officials began questioning the safety of the product, and in 1910, it was banned altogether. In 2005, absinthe resurfaced, thanks to a reversal of the laws. With that, Francis launched Absinthe la Valote Martin.

In 2010, the Martins met the owner of the aforementioned absinthe château, dated 1777, and asked him if they could put their distillery inside. With a contract and a copper still, the Martins kept the family absinthe project alive and continue to conduct tastings to this day. Philippe pays homage to the area’s past by growing his own wormwood as well as the other herbs that go into their line of eight products. His garden is located right across the street from the château, and there he harvests both petite and grande wormwood, lemon melissa, hyssop and peppermint, among others. While currently he doesn’t grow enough in this little plot to support the whole operation, Martin does source the extra herbs from nearby farms (save for the imported star anise and green anise). 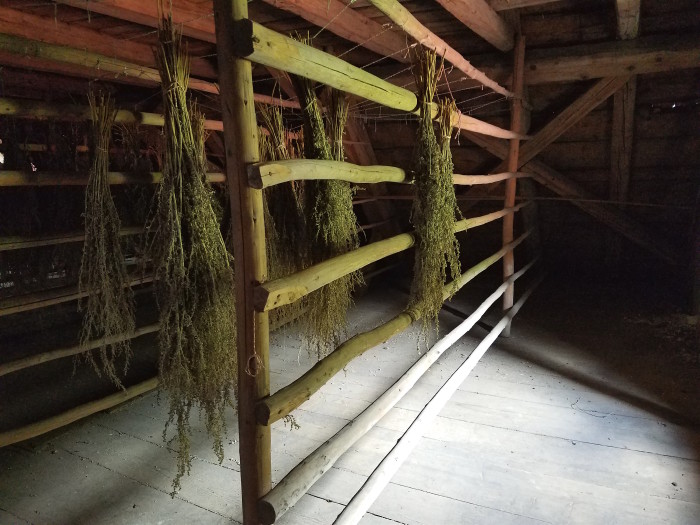 Martin dries all the herbs in the traditional way by hanging them upside down in a cool, dark place with good airflow for five to six months. The perfect spot for this task happens to be upstairs in that old château’s creaky attic, a space complete with wobbly floorboards, cobweb-covered windows and a stairway so narrow you have to walk up and down it sideways. When Martin first moved in, he knew it had been used before to dry herbs for absinthe. After all, plants from the 1900s were still hanging from the rafters, and a table and chair were propped up on the side as if someone would be coming back.

Today, Absinthe la Valote Martin bottles around 10,000 liters a year and creates an array of drinks, all featuring different herbs and techniques. You can find it in various shops and restaurants in the Jura region.