“Use all parts of the animal” is a mantra in professional kitchens, one that pays respect to the protein and reminds us that ingredients were once living creatures. It’s also the genesis of some of life’s best delicacies, like sweetbreads, pâté (offal) and homemade stock (bones). Often the most unexpected parts of the animal deliver the most potent, unexpected flavors. Which is where lobster mince comes in.

Cape Seafood, the processing facility behind popular New York lobster roll joint Luke’s Lobster, is exploring innovative ways to ensure that as conscious consumers, we utilize this delicious crustacean to its fullest potential. In addition to handpicking meat from all parts of the lobster (including the difficult-to-access leg meat), they are currently in development for a new product that they’re tentatively calling lobster mince.

Lobster mince is what it sounds like: finely processed meat pulled from the tiny crevices of the lobster body between the bones and knobby joints. The cooked bodies are run through a “deboner” that extracts all the final bits of meat from the core of the animal. Unlike the tail or claws, the bodies don’t have solid, meaty flesh that can be removed intact. As such, the result is a delicate-textured product resembling minced lobster meat. It’s also exceedingly moist — as the bodies are processed, the deboner is extracting not only the meat, but all the juices from the lobster as well. In fact, when the lobsters reach the end of the processing line at Cape Seafood, all that remains is a very dry shell “mulch.”

Once thawed and strained, the lobster mince texture is like flaked crab meat. It’s incredible how much flavor is contained in such light, fluffy meat. The super-fine consistency makes it ideal for mixing into soups and stocks, or as the base of a savory pasta or vegetable filling.

Luke’s Lobster was kind enough to send me a frozen sample of the mince, which is still in beta testing. After a few pointers from Lauren Gibson, Luke’s director of catering and in-house recipe developer, I spent a lobster-filled afternoon upgrading standard dishes with this new lobster product. Lobster scrambled eggs? Sure, why not! Lobster-stuffed mushrooms? Absolutely. Lobster dip? Let’s just say you’re going to love this stuff.

After many, many lobster dishes — and a few epic failures — it was clear that fillings and stuffings are where the mince really shines. I started with a five-pound bag of mince, which arrived fully cooked, and set out to create a basic lobster ravioli. I ended up creating what is arguably the best, multi-use filling ever to exist (in my humble opinion).

This is not an understatement. The mince itself has no additives. It’s nothing but super-fresh, locally sourced Maine lobster, so simple dishes with minimal ingredients will work best to accentuate the delicate flavor of the lobster meat. By adding just a handful of standard filling ingredients like herbs and cheese, the mince became the perfect backdrop both in texture and flavor to create a rich, luxurious filling.

The below recipe is for the lobster raviolo that occupied the better part of my Sunday afternoon (which, thankfully, resulted in no fewer than 47 ravioli, which I’ve frozen for future use). I like to serve one oversize raviolo instead of a crowded plate of smaller ravioli. It makes for an impressive presentation, but I also find that the shellfish is so rich, one or two is more than sufficient.

A note on technique: The key to this filling is removing moisture. Once defrosted, the lobster mince will have a significant amount of water separating from the meat. It’s visible in the bag, but simply emptying the bag through a strainer is not enough (excess water was the culprit behind one particularly grim lobster dip disaster). Wring out as much of the water as possible — this is imperative. After the dip fiasco, I ended up pressing the mince through a finer sieve in small batches, but a cheesecloth would likely work as well. It wasn’t the sexiest food prep, and it was a bit laborious, but the final product was light and fluffy lobster meat.

After making copious amounts of pasta, I tested this filling out with stuffed portobello caps, but it would also work beautifully with hollowed-out potato skins (hello, game day upgrade!), petite stuffed peppers and cannelloni. Switch out the Parmesan and parsley for queso fresco and cilantro and you’ve got a weeknight enchilada recipe to slay all others.

*The lobster mince is not yet available to consumers, but Luke’s hopes to have it available by mid-2017. 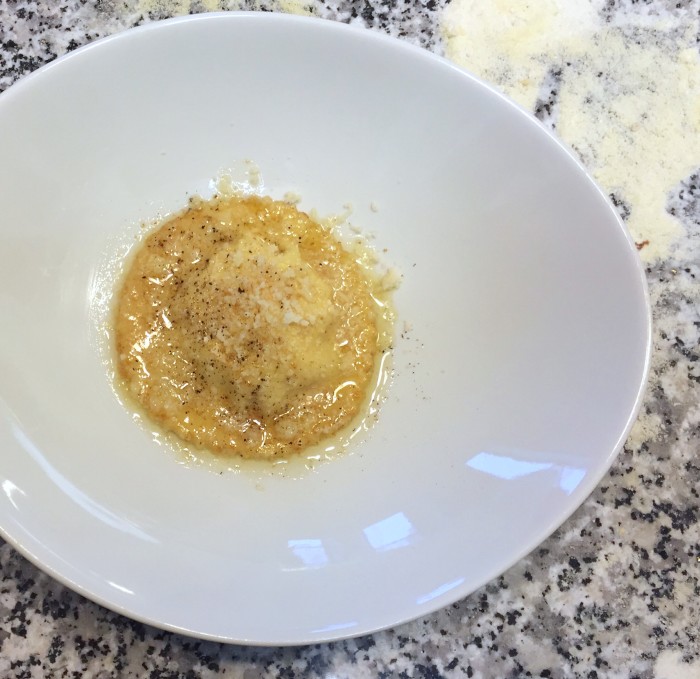 Note: To save time, use readymade pasta dough or fresh lasagna sheets from a local gourmet or specialty market and roll it out at home. If you choose to make the pasta dough from scratch, do this first, then make the filling while the dough rests.