We’ve severely depleted the bluefin tuna population, and other species like red snapper are not far behind. But not all seafood appears doomed. The lobster population in Maine is alive and well, enjoying a succession of bountiful seasons for the past several years. Presumably lobster — an expensive luxury ingredient in constant global demand — would go the same way as the bluefin, but it hasn’t. The population has been able to withstand many consecutive years of heavy fishing, sustaining a healthy and lucrative industry in Maine.

Maine’s success is rooted in its long history of thoughtful conservation. The state passed the country’s first sustainability law in 1879, which established the lower threshold on legal lobster size (requiring fishermen to throw back small lobsters). Efforts to maintain a healthy crustacean population have grown ever since. Nowadays, sustainability measures are integrated into every step of the lobstering process, beginning on the fishing boat and continuing through the supply chain to that succulent lobster roll you just Instagrammed.

From the moment those tasty crustaceans are pulled from the water, there are measures in place protecting each one. Marine law calls for all lobsters to be checked for size, and only those within a 3¼” to 5″ window are legal to keep. Anything smaller or oversized must be thrown back. Because of this, baby lobsters are allowed to grow to maturity, and the oversized animals are protected for life, which allows them to mate. 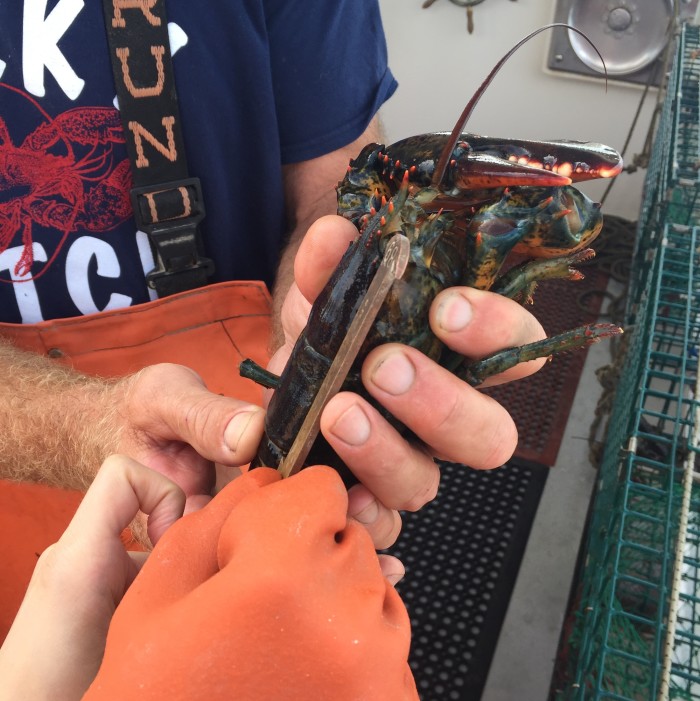 Even the traps are designed to hold only in-range lobsters. 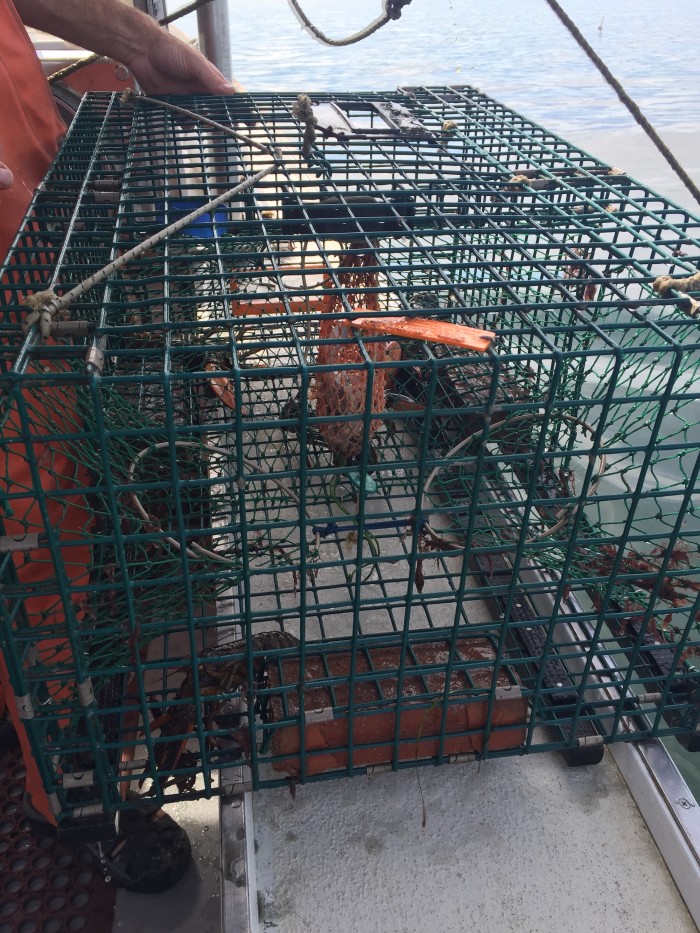 In essence, the industry is fattening up these smaller lobsters and providing a stable food source for the population until they are large enough to catch. To help protect those females bearing eggs, lobstermen will clip the tails of females, marking them as sanctioned for life and ensuring the propagation of the species.

These efforts are essentially an honor system — and a deeply rooted one at that. Most local lobster boats in Portland, Maine, are small, family-owned businesses that are passed down through generations. “There’s a huge code of ethics among the fishermen and enforcement as well. We passed the marine patrol on the way in [to the harbor] tonight,” says local lobsterman Tom Martin. Martin’s boat, the Lucky Catch, runs charter tours for tourists during the summer, and this business has been so strong that he’s worked with two other captains to expand the business to three boats (a lobsterman’s license is linked to a single boat). For families whose entire livelihoods depend on the ability to fish lobster, breaking the rules is a self-inflicted wound. In addition to steep fines, it’s not uncommon for repeat offenders to have their fishing licenses revoked.

From the boat to the vendor

Most lobster caught in Maine moves from the boats to a local wholesaler. In Portland, many of the largest markets sit right on the water, allowing for easy and efficient access to the lobster boats. These vendors buy daily lobster hauls from the local boats and usually keep the lobsters in saltwater holding tanks until orders are placed. Then the lobsters are driven or airmailed to the restaurant or food group that purchased them. Mortality is always an issue, of course, but thanks to technological advances in global shipping, many of the wholesalers in Portland are shipping live animals to the far reaches of Asia with minimal product loss.

These massive wholesale markets are routinely and strictly monitored for compliance as well. Surprise visits from inspectors are not uncommon. Wholesalers caught buying or selling out-of-range lobsters are hit with heavy fines and can even be shut down. Perhaps worse than the financial repercussions, though, is the damage to their reputations. Maine lobstering is an intimate network of well-established relationships. These wholesalers rely on getting the best product from local boats. Without the trust of the lobstermen, these vendors can be put out of business.

Unless you ordered live lobsters from a vendor or you are eating a lobster you caught yourself on a boat tour, you’re most likely eating lobster that has been processed and packaged for a restaurant. A lobster-processing facility will typically buy direct from a handful of boats or place large orders from local wholesalers. Large processors can have exclusive arrangements to purchase product from a cooperative. The facility processes the live animals into a variety of packaged products, from flash-frozen tails to refrigerated tubs of claw meat, ready to be prepared by the chef or home cook.

One of the larger processors in the area is Cape Seafood. It is owned and operated by the guru behind one of New York’s best lobster rolls: Luke Holden of NYC-based shellfishery Luke’s Lobster. The company has established what is essentially a vertically integrated business model. They do not own their own boats, but by owning the processing portion of the supply chain, Luke’s can verify that the lobster used in their rolls is not only sustainably sourced, but also sustainably processed.

“When we got into business with our first shack in 2009, we did so with the commitment to only serving seafood we could trace back to the sustainable resource where it was caught,” explains Holden. True to this philosophy, he recently established the lobster industry’s first integrated co-op of lobstermen: the Tenant’s Harbor Fisherman’s Co-op. “Beyond supporting and sustaining the industry for ourselves and the state of Maine, we control the supply and can validate that the seafood is coming from a resource that is sustainably managed,” he explains. 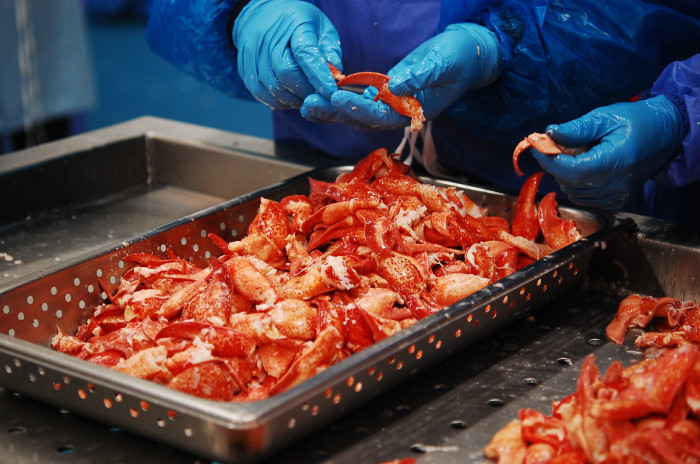 Cape Seafood boasts a maximum six-hour window from the time the lobsters leave the boat until they are cooked, shelled exclusively by hand, flash-frozen with liquid nitrogen, and packaged. It’s a stunning feat given the laborious nature of hand-picking lobster. In addition to the individually wrapped portions of meat sent directly to the Luke’s locations, Cape Seafood also processes lobsters into cooked tail meat, knuckle/claw meat, and for clients who make special requests, the savory green tomalley innards, all vacuum-sealed and ready for shipment.

To ensure very little waste, Cape Seafood even has a specialized roller that perfectly extrudes the difficult-to-access leg meat. “We pride ourselves in using the whole lobster; from antenna to tail, we use the entire body,” notes Holden. The only noticeable waste is the residual lobster shells. “We are working on using the lobster shells to create an all-natural fertilizer and pesticide,” Holden says.

Maine lobstermen have been ahead of the curve on sustainability for more than a century. It is not the sexiest profession, and maintaining sustainability measures in a complex global supply chain in constant demand is not easy. But at a time when overfishing and climate change continue to vex the seafood industry, the story of the sustainability of Maine’s lobster fishing industry provides a ray of hope — with a ramekin of melted butter on the side.