Contrary to popular belief, “Thai chilies” don’t actually exist! Before Christopher Columbus arrived in Asia, Thai people used peppercorns to add heat to their food. A lot has changed since then, and now nearly every Thai dish features some type of chili. The list of peppers used in Thai cuisine is fairly lengthy, so we met with Prin Polsuk, head chef of the award-winning Nahm at Bangkok’s Como Metropolitan Hotel for a lesson in all things heat-inducing.

It so happens that the chef’s favorite ingredient in Thai cuisine is prik, which means “chili” in Thai. Polsuk not only finds it challenging to deal with the temperamental nature of peppers, but he also likes to layer the different aromas, heats and textures they offer. “We use eight chilies at Nahm, all for different reasons,” Polsuk says.

In Thailand, chilies are eaten dried, fried, pickled and fresh. You’ll find different chilies in salads, curries, soups, pastes, dips and just about everything. Here are the chilies found in Thailand, each of which play a major role in giving each dish its unique characteristics.

This chili is found in the Ban Chang district in Southeast Thailand and can be quite difficult to find. According to Polsuk, Thai people are eating fewer chilies nowadays, which means that it’s becoming harder to find good-quality specimens. Prik ban chang is a long pepper with smooth skin that comes in green and red varieties. It is not a chili known for its heat, but it is appreciated for its flesh and minimal seeds. It is commonly sun-dried and used for chili pastes and curries. 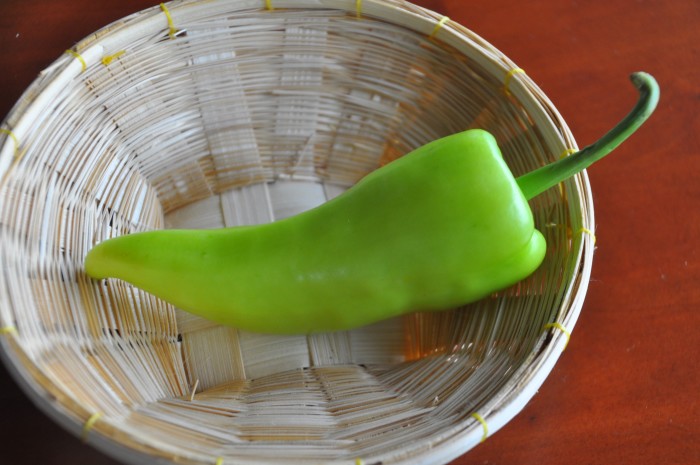 This is a not a spicy chili — it’s actually quite sweet, and its light green color does not change as it ripens. Chef Polsuk uses this chili in a remake of an ancient Thai dish called prik yuak sord sai. He stuffs the chilies with pork or shrimp and wraps it with a net made of eggs, similar to other stuffed pepper dishes you can find in other parts of the world. 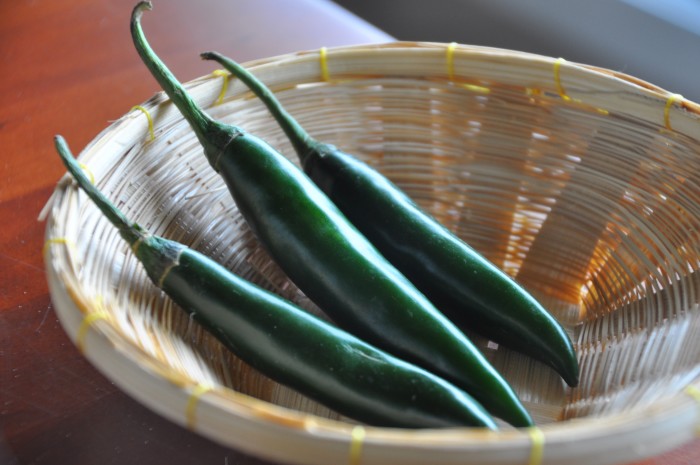 This chili has a glossy sheen to its skin (mun in Thai means “oily”). They come in red and dark green hues and are perfect for pickling. These are the peppers you’ll find served as condiments in vinegar or on their own at any street stand or food court in Thailand. 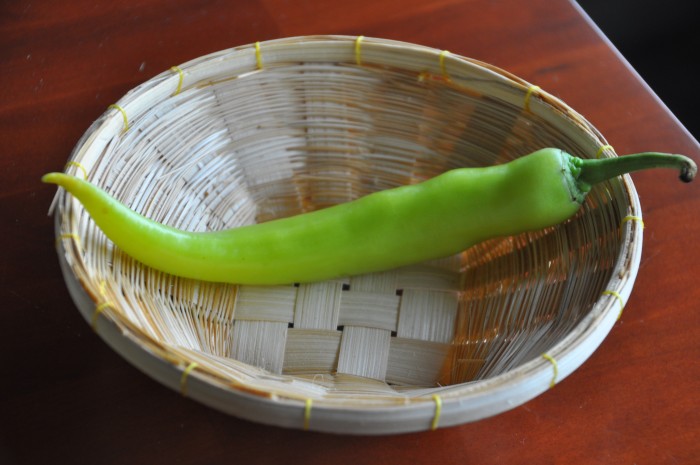 Moving up on our spicy scale is prik noom. This chili comes in the same green as prik yuak, but has a longer shape. The whole chili can be used and is best represented in a popular northern Thai chili dip called nam prik noom. In this preparation, the whole pepper is blackened over open flames to get a smoky flavor, then pounded into a stringy paste. Chef Polsuk likes to use the smoky chili flesh in stir-fries. 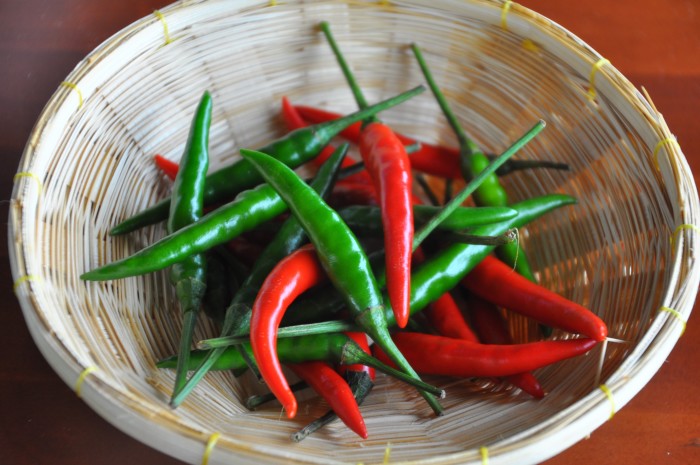 Thai people are very practical when it comes to naming things. Prik chee fah translates to “chili pointing to the sky.” This chili comes in green and red and sometimes both. Its red color is intensified and preserved when dried and is what gives red curry its bright color. Appreciated for their simple beauty, prik chee fah peppers are commonly used as garnishes, fresh or pickled.

Above is chef Polsuk’s ma hor, a sweet and salty paste made with pork and shrimp, served on sliced fresh pineapple. He uses prik chee fah peppers in this dish for their flavor and the aroma. 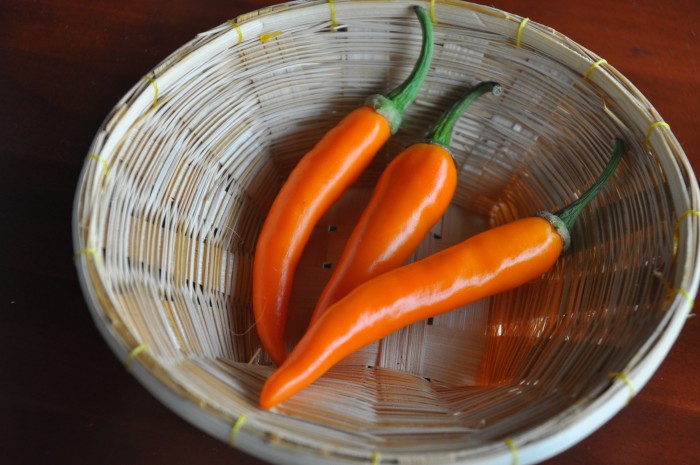 This spicy golden orange chili is not used as frequently as the red or green chilies, but you’ll usually them them pickled and added to Thai salads to give a pop of color to a dish. Polsuk uses these to accentuate his phad naem — fermented pork fried rice. 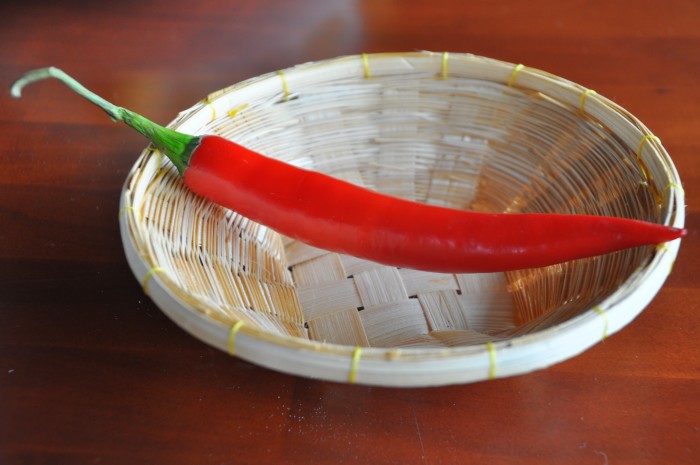 This chili comes in both red and green and is very spicy. Prik jinda gives dishes heat and flavor that the Thai refer to as “green flavor,” best described as a fresh, grassy aroma. 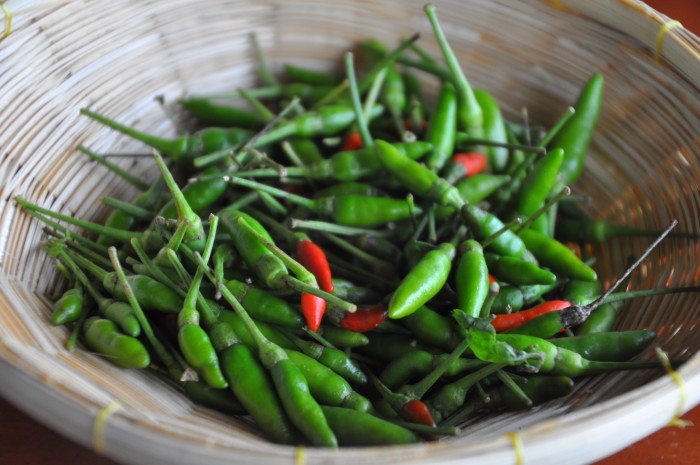 The most popular chili used in Thai cuisine is prik kee noo suan. The name translates to “mouse dropping chili” because of its tiny size, and the pepper is known to be one of the spiciest found in Thailand. They’re used in tom yum soup, spicy salads and green curry. Green curry paste is made from unripe prik kee noo suan, which give the curry paste its signature color and tart heat. 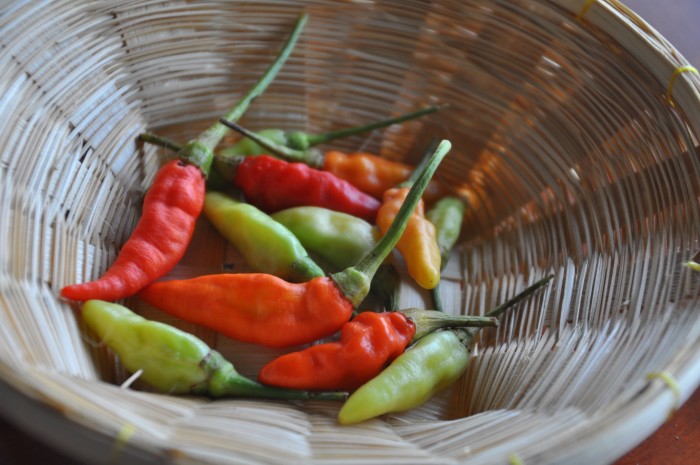 Prik kaleang is the spiciest chili used in Thai cuisine and comes in a variety of colors, from pale yellow-green to fluorescent red-orange. Chef Polsuk presented a jungle curry that had me gulping down water and fanning my mouth, and I’m native Thai! “It’s a friendly challenge for you,” he laughed. The jungle curry he makes at Nahm is not on the menu, but brought out only for tourists who claim they can eat “Thai spicy” food. “You won’t taste it at first,” he says, “but after a few bites, you’ll feel it.”

His infamous jungle curry is spiced with with 50 percent kaleang chili and 50 percent prik keenu suan. Don’t bother asking for anything “less spicy” at Nahm, as Polsuk wants you to experience Thai dishes the way they should be eaten. Cooking them with less chili would change the flavors completely, he says.