For many travelers to Louisiana, summer can mean a weary drive through oppressive heat and humidity. Most are on their way to New Orleans or just passing through on the way to the Gulf Coast. Adventurous eaters are always looking for new, up-and-coming restaurants, but what about the longtime standby spots that are still doing amazing things, particularly off the beaten path?

Take a trip back in time on the highways and byways of the Pelican State to discover these unique, down-home dining locations that have stood the test of time. Beloved classics are placed front and center: Wood-smoked barbecue, gigantic omelets, Blue Plate dinners and some killer slices of pie. Have a seat where so many have dined before, and enjoy a taste of Southern Americana. 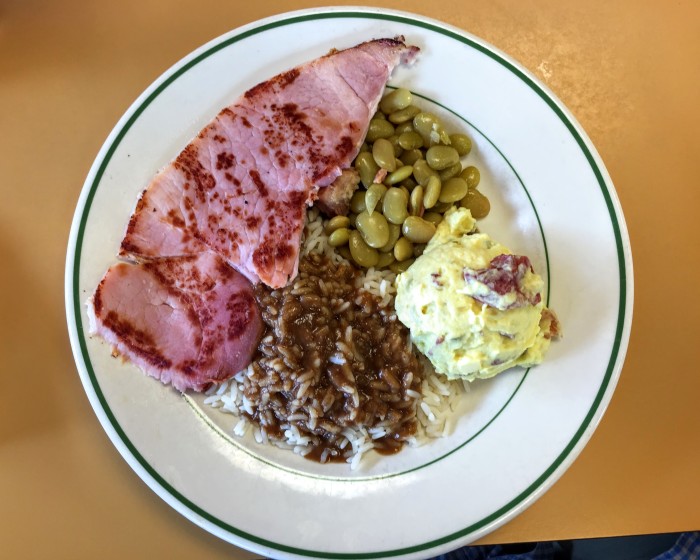 Lea Johnson traded an old Model T for his first place: a counter with five stools and a coal-fire stove. Through the years, the restaurant has grown and changed (marginally), offering a home-cooked meal to weary travelers. Legend has it that Lea’s served the last meal to legendary bandits Bonnie and Clyde before they were taken down by the law just to the north, in rural Bienville Parish. The classic lunchroom offers an early home-cooked breakfast as well as lunch plate specials that focus on the family’s history in pork production. Baked ham and ham sandwiches are the name of the game. On Sundays, they cook up a classic Sunday dinner of fried chicken, potato salad and cornbread dressing. In the mood for dessert? The eatery is synonymous with delicious pies. The varieties abound and are seasonal, but the pecan pie is like none other. You can buy pies whole or by the slice, so make sure to bring some home to share! 1810 U.S. Hwy. 71, Lecompte, LA; 318-776-5178; leaslunchroom.com 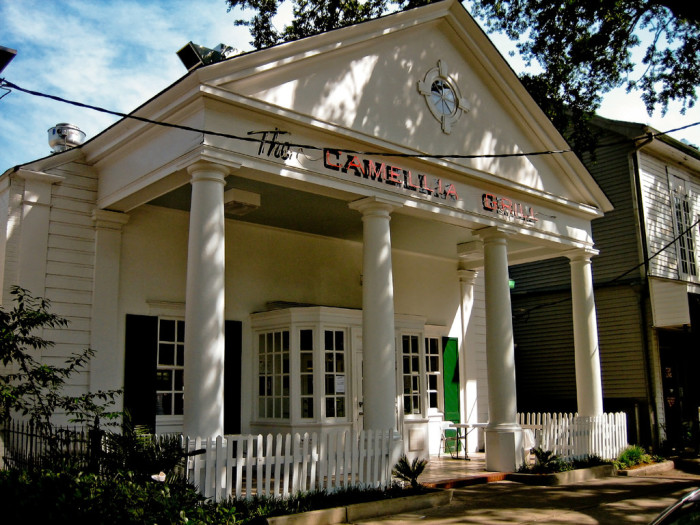 In need of a delicious, diner-style breakfast after a night on the town? Hop on the St. Charles streetcar and take it until it makes a turn at the river. Camellia Grill will rise like an old plantation home with neon lights on Carrollton Avenue. If you aren’t early enough, the line will sprawl out the door. This place is a longtime tradition for New Orleanians, offering counter-only service of breakfast mainstays and one seriously delicious plate of red beans and rice. The bow-tied servers are smiling and gregarious; they’re known for their long loyalty to the grill and for making all visitors feel like regulars. The restaurant reopened its doors slowly after Hurricane Katrina, officially opening for business again in April 2007, much to the joy of locals and tourists alike. Just recently, the sister location in the French Quarter opened its doors again in December 2015 after being shuttered for five years, though the uptown location is still the favorite. 626 S. Carrollton Ave, New Orleans, LA; 504-309-2679; facebook.com/pages/Camellia-Grill 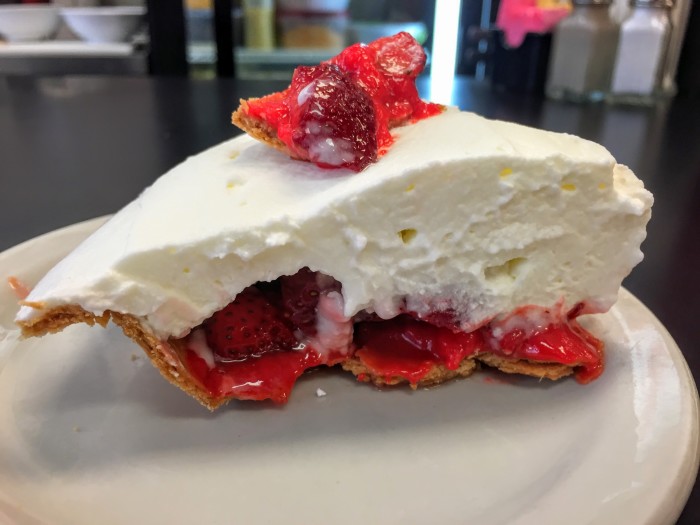 Since opening its doors in the 1940s across from Centenary College, Strawn’s has offered hungry students and faculty an affordable and heaping plate of hashbrowns and eggs, a rotating selection of daily lunch plates as well as blue-plate specials for dinner. The meatloaf on Saturday is a delicious and popular choice, though no one has ever gone wrong with the chicken fried steak smothered in gravy. The tiny storefront sat only 50 patrons until it expanded into the space next door in 2001. A good thing, too, since travelers come from far and wide for a slice of the acclaimed ice box pie or a classic malt. It’s a tough choice between the strawberry and butterscotch, but if you happen to be lucky enough to visit during peach season, that slice trumps them all. 125 Kings Hwy., Shreveport, LA; 318-868-0634; strawnseatshop.com

Everyone in the area has a story about the Mohawk, the oldest restaurant in Monroe. Today the location is run by the third generation of the Fontana family and offers nearly the exact same experience as it did in the 1960s, when it expanded to offer full food service to its oyster- and cocktail-loving clientele. Briny bivalves are still a mainstay at the Tavern, raw on the half-shell or fried. And people swear by the award-winning seafood gumbo. It’s a dark, dense, almost gravy-like roux that’s a perfect elixir for whatever ails you. Also not to be missed is the Shrimp Delight Salad, a creamy mixture of peeled shrimp and remoulade atop a bed of lettuce. Looking for a crunchy lunch? The fried shrimp po’boy is pitch-perfect goodness. 704 Louisville Ave., Monroe, LA; 318-322-9275; mohawktavern.net 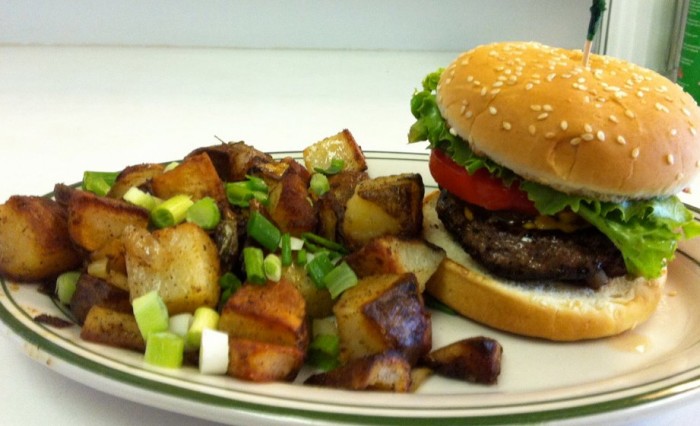 Originally called Louie’s Old Dutch Mill, the eatery was a bakery from 1939 until it was moved to a new location as a restaurant in 1941. To this day, Louie’s is open 24 hours a day at the foot of the Louisiana State University campus, serving up delicious burgers, hash browns and the signature veggie omelettes to students, faculty and reminiscing alumni. The restaurant is almost always bustling, especially during football season (it’s just steps from Tiger Stadium). The place boasts some of the lowest staff turnover around, offering familiar faces to patrons upon each return visit. The current owner, Jimmy, took over in 1977 and is the Louie’s mascot. Although Louie’s has hopped around to new buildings for more space, the business has not ventured more than a block from the original spot, and the decor hasn’t changed much at all. The former bakery still boasts its black, white and turquoise hues and prides itself on homemade biscuits, but customers must be quick! The biscuits are only offered from 6 a.m. until the supply runs out. 3322 Lake St., Baton Rouge, LA; 225-346-8221; louiescafe.org 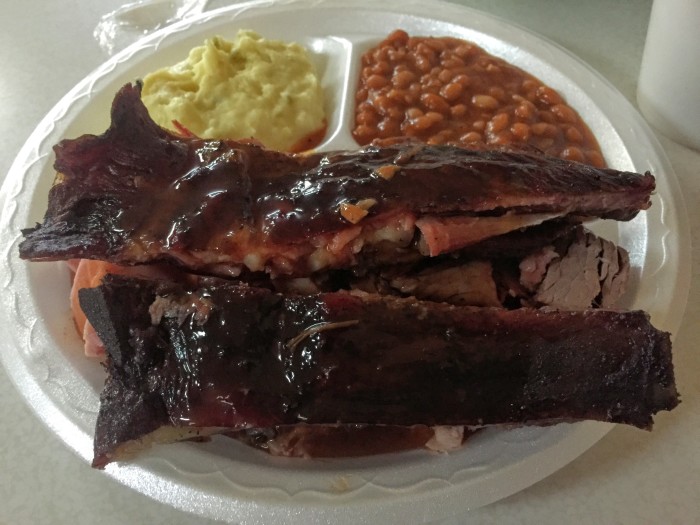 The nondescript building sits in an equally nondescript gravel lot with a sign that’s seen better days. But don’t let that fool you — Grayson’s is an institution. The spot has been churning out the same delicious smoked meats and fresh-baked rolls for ages. Now in its third generation, the restaurant was originally established in a nearby location by Ollie Grayson and handed over to his sons in 1966. Today, Bryan and Gregory run the show alongside their dedicated staff. The menu is simple — a single piece of laminated paper with the option of sandwiches, pounds, plates and sides. Every day, the restaurant slow-smokes beef, ham, pulled pork, ribs and chipped beef, but the smoked ham is the star of the show. People have been ordering Christmas hams and Thanksgiving smoked turkeys from Grayson’s for decades (and the restaurant will ship them, too!). The handmade rolls make the chipped beef sandwich a spectacular snack, and the pecan pies are the envy of any local baker. The staff also rolls out a batch of fresh-baked cookies every morning that customers can grab from the counter on their way out the door. Although Grayson’s has never advertised, the walls are strewn with a dazzling array of business cards, a testament to the venue’s worldwide popularity. If you’re in the area, it’s well worth a jaunt off the interstate, but do call ahead. The Graysons are known to close on Mondays and give ample holidays off to their staff. 5849 Hwy. 71, Clarence, LA; 318-357-0166; facebook.com/Graysons-Bar-B-Q