Full disclosure: As part of an ongoing partnership, Food Republic regularly publishes recipes from ChefSteps, the manufacturer of the device under review below. While that relationship may have helped to facilitate the procurement of this test model, it bears no significant influence on the results of our tryout. The reviewer was specifically tasked with rendering an unbiased opinion based purely on the product’s performance. Here are her findings.

I consider myself a proficient home cook — rarely am I foiled by an exotic ingredient or tricky technique. When I learned I’d be receiving one of the first test units of the Joule sous vide wand from Seattle-based food and technology company ChefSteps, I was nothing short of ecstatic. My technical skill set was about to make a big leap forward.

When sous vide cooking first became trendy, it was an obscure, technically advanced method that only the most skilled professional chefs could master. It required expensive, bulky, fussy equipment to produce dishes that relied heavily on tiny, incremental adjustments in temperature. However, as the technology improved and cooking sous vide became more commonplace, a food-savvy consumer base began asking questions about how to attempt this method at home. Companies are now heeding the call and adapting restaurant-caliber techniques into approachable, relatively affordable tools for ambitious home cooks. As for sous vide, I can’t think of any method that is more ripe for plucking from the professional kitchen and bringing into the home (although I’m still holding out for a countertop anti-griddle.)

Cooking sous vide is an indirect cooking method in which food is placed in sealed plastic bags and dropped into a temperature-controlled water bath. (Sous vide translates to “under vacuum.”) Since the pouches are air-sealed and protected from dilution within the cooking liquid, the result is food with intensified flavors infused with whatever is within the bag. Foods cooked sous vide are not only very flavorful, but also executed to perfection thanks to precise temperature-control features. The foods in the pouch will never exceed the temperature of the water bath, meaning meats, for example, can be cooked to an exacting degree of doneness simply by setting the temperature of the water bath. Imagine creating juicy, rosemary-infused chicken breasts and perfectly medium-rare filet mignons with little to no risk of ruination.

Succulent red meat is fabulous, but the sous vide method’s claim to fame is the humble egg. Cooked through but barely formed and just holding its shape, a sous vide egg is runny and silky. It is the egg for egg lovers, but eggs are finicky little spheres, and even just pulling off a ramen-worthy, soft-poached egg is not an easy task. Even when delicately poached in slowly simmering water, it’s nearly impossible to replicate the uniformly smooth, milky opaqueness of a sous vide egg white. And the yolk? Even the most OCD of home cooks armed with a stopwatch will never be able to control the varying degrees of yolk doneness. The difference between a jelled and runny yolk is two degrees.

This is how my mission began: to conquer the perfect sous vide egg and crown myself Queen of Brunch.

Arrogantly, I set up the Joule and immediately set out to master the soft poached egg. I disregarded that eggs were listed under the “level up” category. (I know what I’m doing, maybe!) 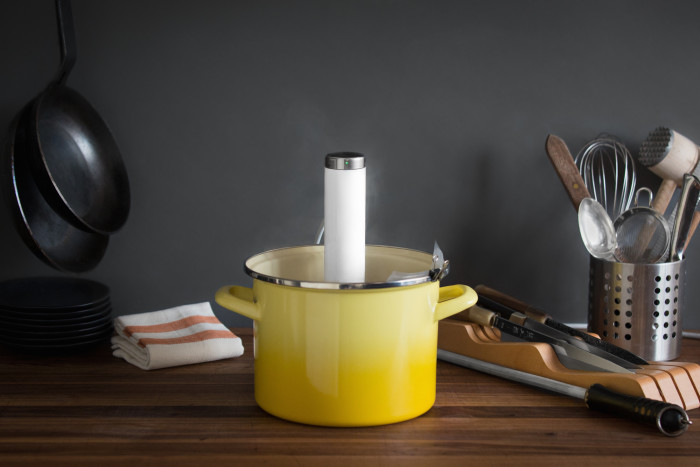 The design of the device is sleek and simple, especially compared to competitors that can be bulky, nearly three times the size, and feature cheap, tacky digital displays. The Joule’s setup is very easy: Just procure one large pot and a box of heavy-duty ziplock bags and you’re ready to cook. To use, simply place the wand into a large pot filled with water. There is a powerful magnet nestled in the base to ensure it doesn’t tip over, but there’s also a hefty clamp on the side to attach the device directly to the pot. The Joule works over Bluetooth, controlled with an app on your smartphone. Once turned on, the app walks the user through each recipe, prompting you to select the appropriate temperature for the water bath based on the desired doneness of whatever you’re cooking. Once set, the Joule kicks on and starts preheating the bath to bring it to temperature. It is stealthily silent.

The Joule app is still in beta testing, so there is a limited selection of recipes, but ChefSteps included a handy visual guide within the egg recipe to help determine which temperature setting is optimal for the type of egg you want. I set the temperature to “Gelly Ellie,” or 145°F, which should have delivered a runny yolk and barely jelled egg white. I dropped six eggs directly into the pot (no bag necessary — eggs can cook directly in their shells), and pressed start. An hour later, when the Joule notified me my eggs were ready, I scooped them out with a slotted spoon and began to slowly crack the first egg to unveil the product of my undoubtable prowess. I clipped off the top of the shell and slid the egg out onto the spoon, as instructed.

Justice was swift and merciless, and my failure pronounced. All six eggs were inedible. Inexplicably, the yolks were loosely jelled, as I hoped, but the whites were raw. How was this possible? Flabbergasted by this strange result, I retreated to the internet in search of answers with my hubris in check.

I decided to take a step backward and cook a piece of meat instead. This was listed under the “basic” category of recipes, so I hoped success would be imminent. I bagged a single filet mignon with olive oil, two sprigs of rosemary, and a generous sprinkle of salt and pepper. Set to 129°F, my steak should have been on the rare side when removed from the water bath. After a quick sear in a very hot pan, it would be a perfect rare with a nice crust. The additional flash of heat would bring the internal temperature near 134°F, or an ideal medium-rare. 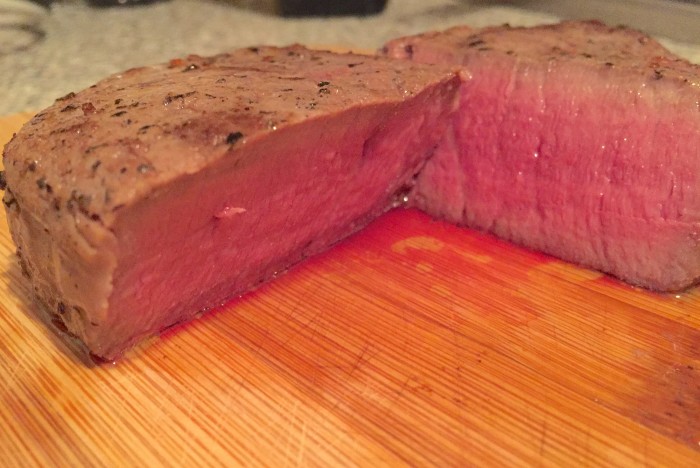 Some self-confidence was restored when I removed the steak. It felt done to the touch. After quickly searing and allowing it to rest momentarily, I sliced into the meat to reveal a perfect piece of meat. It was an even medium-rare all the way through, juicy and brimming with salty goodness and a subtle note of rosemary. 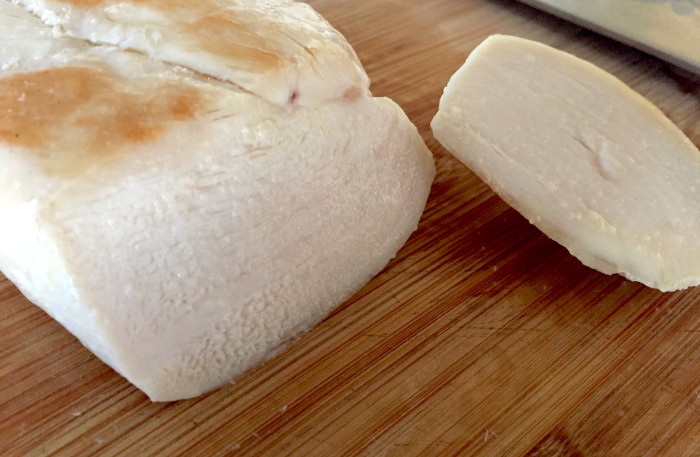 I repeated with a chicken breast, and the results were equally successful. However, I do wish the app differentiated between bone-in and boneless meats. This is unclear throughout all the recipes, and for chicken specifically, I always prefer bone-in. However, using the Joule, the boneless breast — a dish that is boring and often overcooked — retained a significant amount of flavor and juiciness.

Buoyed by the success with the meats, I now knew that the machine was performing as designed. I reattempted eggs, following the same steps as before, except I increased the temperature to 151°F. If I cooked the eggs more thoroughly, I thought, the whites would jell and I would be able to cleanly crack the shells. 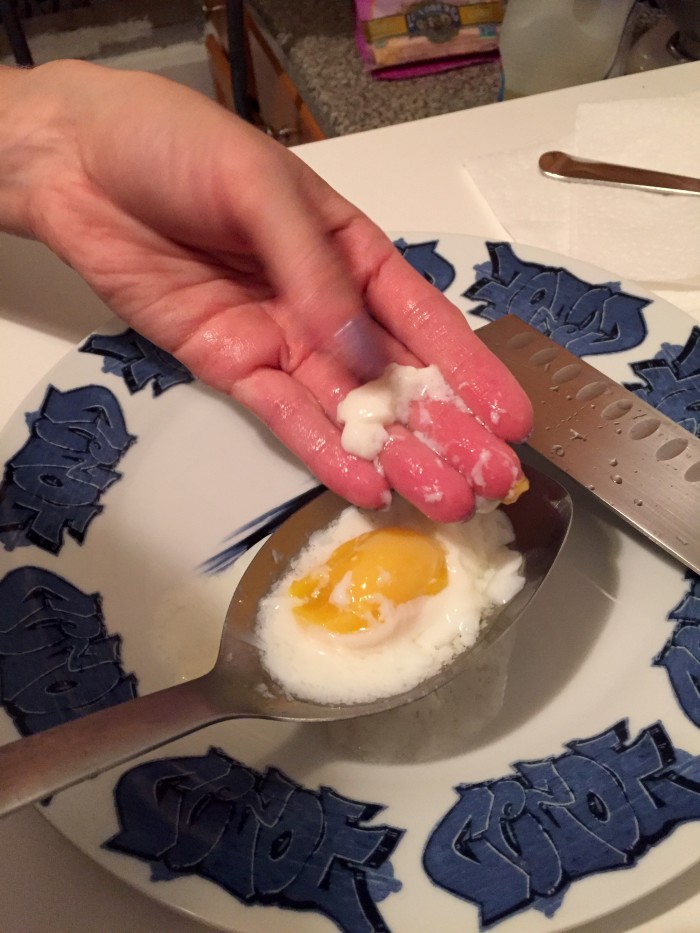 One hour later, another failure. The yolks, again, were cooked perfectly, this time a bit fudgier in texture, and I could see that the whites were starting to solidify. But the overall cook was uneven. The few bits of cooked white were chunky and unevenly suspended in raw white, like a bizarre, watery, thoroughly unappetizing tapioca.

I was transfixed by my egg failures, so a brief interlude with some vegetables was in order. ChefSteps’ Joule app doesn’t have a beet recipe, but after some online research I found that 185°F for an hour should suffice. I probably should have cut the beets in half because for “baby” beets, they were a bit fat. Aside from the bordering-on-undercooked crunch, the beets did have more flavor as compared to roasting. With the Joule, I could include a splash of vinegar in the bag with the vegetables, which not only preserved their vibrant color but also gave them a certain brightness of flavor that immediately reminded me of the pickled beets of my childhood.

Things are always darkest before the dawn, I told myself. The team at ChefSteps was kind enough to speak with me and help troubleshoot my ongoing egg saga. Turns out, eggs are the most challenging food for this particular method. The age of the eggs, how they were sourced (organic, free-range), and the thickness of their shells can all impact how the white coagulates. A successful sous vide egg is mostly about luck, and a clean dispatch out of its shell is fully about finesse.

After purchasing another dozen huevos, I adjusted my approach. Instead of using the built-in egg calculator in the app, I manually entered a temperature of 167°F and set the timer to a mere 18 minutes. This egg, I hoped, would not be the prototypical sous vide egg but instead would be a perfect soft boil — the sort of egg ideal for dunking toast spears.

Finally, I was victorious. My egg was as anticipated: The white was fully formed but still soft; the yolk was jelled and glossy.

I have still yet to achieve the sous vide egg of my dreams, but I’m homing in. Most kitchen appliances aim to make life easier for the home cook, taking all the guesswork (and skill and intimacy and joy) out of actual cooking. The Joule, on the other hand, is opening up an entirely new method of food preparation, both challenging and expanding my prowess in the kitchen.

ChefSteps makes this method as foolproof as possible with the mobile app and a library of online support guides and videos, but ultimately it is an advanced device for an experienced home cook. It is exceedingly refreshing and fun to use a device that brings professional techniques into your kitchen but also doesn’t dilute that experience entirely. The Joule forces you to meet it halfway, in a good way. With a little more experimentation, I will master the sous vide egg as I originally sought to do. And when that day comes, I’m sure the team at ChefSteps will hear my victory lap around the kitchen all the way from Seattle.

$199; available for preorder via chefsteps.com/joule