It’s summer, so naturally the bags of frozen edamame and homemade chicken stock in the freezer have been replaced with copious amounts of ice cream and sorbet. One night, in a half-drunken flurry of excitement, I leaped off the couch and darted for the pint of vegan mint chip in the freezer. After waiting an excruciating six minutes for the ice cream to partially thaw, I reached for a scoop to dish up a shamelessly large bowl, only to realize – no ice cream scoop.

I proceeded to eat directly out of the carton, but I now had a mission: to find the perfect ice cream scoop.

There are a few different strategies when it comes to selecting ice cream scoops. First, there are tech-oriented products, which flaunt ergonomics and gimmicks like self-heating handles to better facilitate a clean, uniform scoop. Then there are the no-frills classics, which rely on nostalgia and tried-and-true functional mechanisms. Lastly, there are design-focused options, which feature aesthetic choices like built-in scoop rests or oddly shaped scooping bowls to achieve superior performance. I procured the most alluring from each category and tested them against the old kitchen standby: the large spoon.

When all else fails, the basic kitchen spoon, although certainly not ideal, has its merits. It’s cheap, unfussy, and everyone has one. The resulting scoops aren’t the fullest shapes, but they do remain intact. The downside? Requires a death grip that inevitably ends in someone permanently misshaping the handle and probably leads to carpal tunnel syndrome. To avoid ruining all your flatware, and your forearms, shell out for one of the options below.

It sounds like a fancy sex toy, and it’s packaged like an Apple product. At $35, this is the gold standard of ice cream scoops and clearly means Serious Business. Questions abounded as I unearthed the scoop, mainly: would this be all design and no function? It looks great, and the name makes me giggle, but would it work better than every ice cream scoop ever? Because for $35, I expect nothing less than astonishing performance.

I was flabbergasted. The scoop is so over the top with its polished chrome finish and sexy packaging, but it deftly moved through the frozen pints without a hitch. The design actually inverts the standard scooping motion. Instead of prying at the frozen ice cream, the Midnight Scoop encourages the user to push through it instead, relieving pressure and strain on the hands and wrists. The ergonomic handle is easy to grip and counterbalanced, making the scooping motion easy. The oversize scooping bowl has a unique rounded point, easing ice cream penetration and creating large, full scoop shapes. midnightscoop.com

Versus the kitchen spoon: No contest. Midnight Scoop for the win. 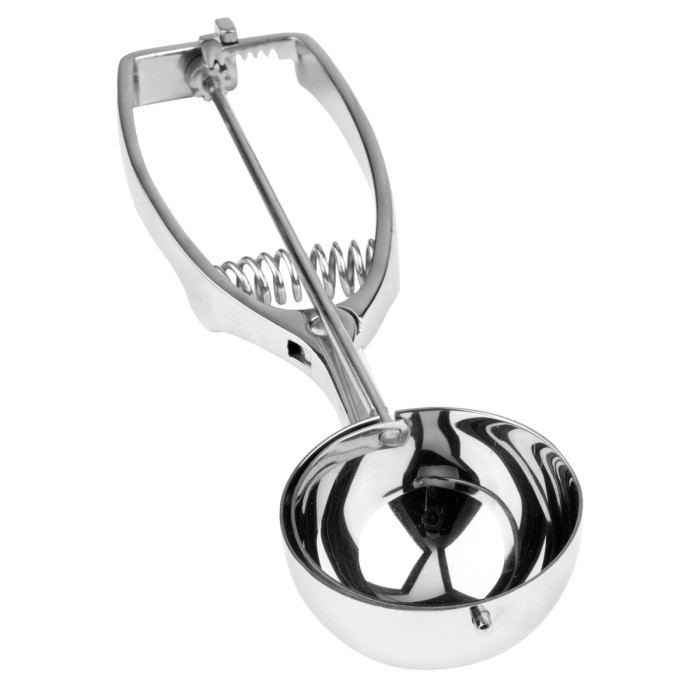 This is the classic, nostalgia-inducing scoop reminiscent of old-timey ice cream parlors and dollar dips from the local pharmacy. This style of scoop has a small mechanism that pushes a small wand through the inner rim of the scoop bowl to dislodge the ice cream without ruining its round shape. However, the scoop’s shortfall is that it’s very difficult to get a full scoop of ice cream in the bowl in order to use that handy lever. The rim of the bowl is unsophisticated and too thick, making it very challenging to break through a frozen pint of ice cream. Since it’s stainless steel, the cold temperature of the ice cream also clings to the metal like glue (hence the moving wand), requiring some shaking and poking to free it from the scooping bowl. It works better with very soft ice cream and sorbets, but the risk is that the ice cream is halfway to melting by the time it’s thawed enough to be scooped.

Unlike the other models, however, this scoop can multitask and works great for making melon balls, uniform dollops of coconut macaroons and cookie dough, and rolling frozen shards of granita into pretty spheres. surlatable.com

Versus the kitchen spoon: Go for the spoon – it’s not user friendly, but it’s still more effective and requires less patience than this particular scoop. 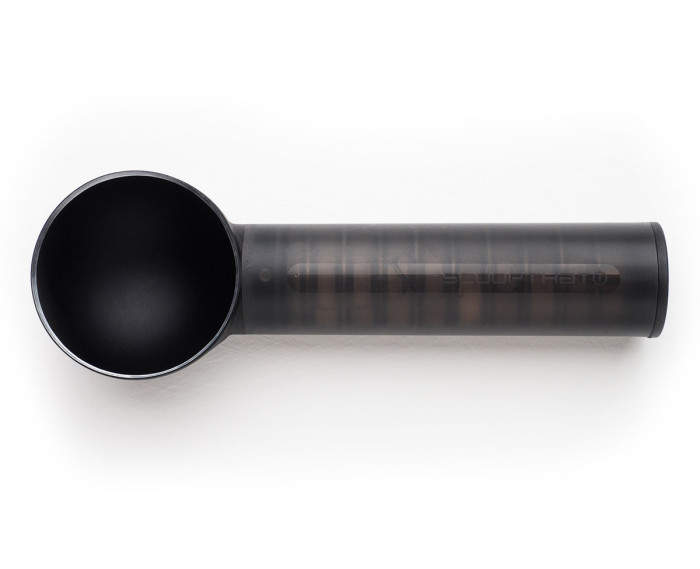 Let’s get this out of the way: terrible branding all around. Like many competitors, this scoop boasts that its heat-conducting materials help conquer frozen treats. The theory is that natural body warmth from your hands travels through the coils and gently heats the metal scooping bowl just enough to loosen ice cream without melting it. This is not new, nor is it particularly effective. The tools from the ’90s that contained water in the handles were based on a similar, now-defunct idea. There is nothing ergonomic or particularly special about this scooper, other than the claims about materiality and the spiral effect in the handle.

Ultimately it worked quite well, but I suspect this had more to do with the super-thin edge along the scoop bowl and not the fancy thermodynamics of the handle. ScoopThat actually has a microscopic two-tier ridge along the edge of the scoop bowl that remorselessly digs into even the most frozen of ice creams, forcing ice cream to curl into the bowl. It works well, but unlike the Midnight Scoop, the user is still left gripping, prying, and straining to get the ice cream out of the carton with little assistance from the generic shape of the handle. us.thatinventions.com

Versus the kitchen spoon: The thin ridge along the bowl gives ScoopThat an edge over the spoon.

The verdict? If you eat a lot of frozen delights, then the Midnight Scoop is worth the investment. It’s beautifully packaged, and unlike a lot of beautiful objects, it isn’t resting on its good looks. Plus, it provides endless inspiration for hilarious innuendo.