Michael Palmer is owner of McConnell’s Fine Ice Creams, founded in Santa Barbara, California, in 1949. Running an artisanal ice cream business isn’t all vanilla and strawberries, however. Palmer shares with us, in his own words, a few things about the industry that jam up the works.

At McConnell’s, we love ice cream, and we’re obsessed with making the finest in the biz. After all, what’s not to love about ice cream? It’s delicious, refreshing and generally hits people right in their “kid spot.” It’s the ultimate smile-maker. But even the ice cream biz can sometimes be a bit…annoying. Here are some of my personal pet peeves about ice cream and the business of ice cream for your entertainment pleasure.

Cutting corners, whether through using cheaper ingredients or some other means, is pretty commonplace these days. For us? It’s. Just. Not. An. Option.

3. “Made from scratch” claims

You see it everywhere these days: companies, food or otherwise, making big claims to foster the idea that they actually make their stuff from scratch. It’s a nice image, to be sure, but often not entirely true. At McC’s, while ice cream is what we make, we’re actually a dairy — the Old Dairy in downtown Santa Barbara, built in 1934. Being a dairy is what allows us to do everything truly from scratch, from pasteurizing our own California Central Coast milk and cream to the finished product. It’s a lot more work to do it this way, but it makes all the difference.

While ice cream may seem like a simple thing, it’s actually quite complex, scientifically speaking. Ice cream is a frozen emulsion, which means we’re combining two ingredients — fat and water — that ordinarily don’t like to be combined. To accomplish this, many ice cream companies add various agents, whether artificial or “natural,” to their recipes to preserve the product and extend shelf life. This can alter the ice cream’s flavor and texture, which, as we know, is the worst. At McC’s, that’s not how we roll. We add nothing that doesn’t have to be there, the same way we’ve been doing it since 1949. 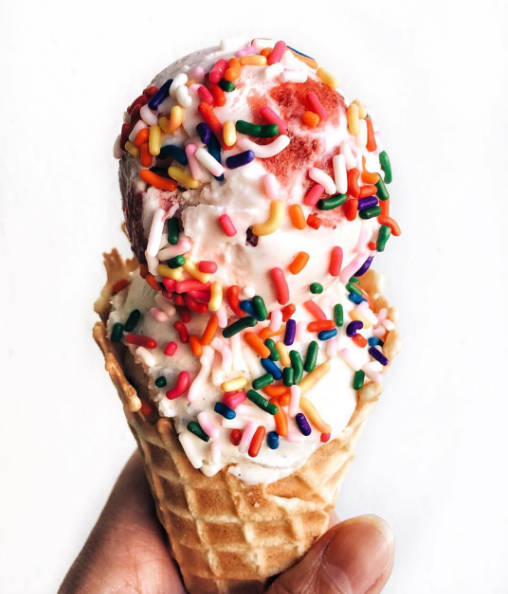 Most ice creams, even artisanal ice creams, are made in batch freezers (sort of a slushy machine mated with a freezer). Batch freezers spin and beat the heck out of the ice cream (destroying texture) and add upwards of 40 percent air to the finished product. But they’re cheap and easy to use, so the lion’s share of ice cream companies use them. Our process, the same one we’ve used for decades, is extremely gentle on the ice cream. The result? Incredibly dense and creamy ice cream, with virtually no air whatsoever.