There’s watermelon, and then there’s Crimson Sweet watermelon, a hybrid developed in the 1960s. “It’s fleshy like a regular red watermelon, but it has a bit more of a savory quality instead of that sugary-sweet flavor,” says chef Jonathon Sawyer, owner of the Greenhouse Tavern in Cleveland, Ohio. Unlike the giant standard watermelons found most of the year, the Crimson Sweet is only available from now until the end of August. If you can get your hands on one, cook it on a hot grill, toss chilled chunks in a salad, puree the flesh into a cool, pink cocktail or simply eat it the old-fashioned way — after all, indulging in a cold slice of watermelon is a delightful summer ritual.

The Crimson Sweet is a cross between the Charleston Gray, Miles and Peacock watermelon varietals. It was bred and released in 1963 by Kansas State University horticulturist Charlie Hall. The varietal proved an instant hit, and even today people still flock to the Crimson Sweet for its small seeds, pretty color and, of course, superior flavor.

Chef Sawyer sources his Crimson Sweets from Red Basket Farms in Ohio, but it grows well in many climates around the United States. Planting season starts in April, and by July the melons are ready to go. August tends to cap it off, so procure this varietal while you still can.

With light green and emerald stripes on a medium-thick rind, this striking round treat is easy to spot. Most of the watermelons run between 15 and 25 pounds. To pick the perfect sample, look for ones with a slightly yellow spot on one side — this is where the watermelon rested on the ground and shows that it ripened on the vine. You can also tell if the melon is good to go by flicking it with your finger and listening for a low, hollow “thunk” sound.

Keep the whole melon in a cool, dark spot before slicing. After you break the flesh, you can store the fruit in a refrigerator for up to two weeks, depending on how ripe the melon is.

“We love crimson watermelon because not only is it local, but the size is not too large and the moisture content isn’t too high,” says Sawyer. “This makes it versatile for preparations other than just slicing and eating.” One way the chef prepares the Crimson Sweet is by turning it into country fried watermelon (recipe below), a dish that pays homage to vegan cooking in the South. “What started initially as a joke became a delicious dish,” the chef says. “It’s a riff on a vegan dish and it’s supposed to be like a crispy fried tuna.” It is essentially, as you might expect, breaded and fried watermelon.

Sawyer also makes a salad at his Cleveland ramen joint Noodlecat featuring pickled watermelon rind and kimchi. “When pickled, they turn out a bit translucent, and the outside is just a little green-tinged,” he adds. You can serve the pickles his way or throw it chopped up into tuna salad, use it as a relish for barbecued meat or eat the cold, crisp pieces as a refreshing snack on a hot day.

Other classic ways to use the Crimson Sweet: Cube it raw and toss into a salad with feta and kalamata olives, grill and serve with a drizzle of balsamic or whip into a smooth and seasonal ice cream or sorbet. Since its sweetness tends to be more pronounced than other watermelons, you won’t have to add sugar when using it in desserts. This also means it’s shoo-in for eating raw during steamy summer nights. 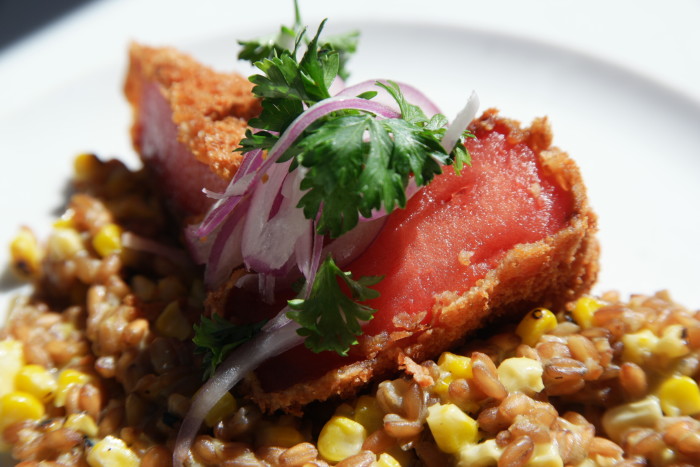 For the watermelon cure:

For the vegan eggwash: