All macaroni and cheese ever did to you was satisfy and delight you with its delicious creamy and satisfying nature. So why are we being such unabashed jerks to a dish that never did us wrong? Share our outrage over this week’s crimes against macaroni and cheese, including not one, but two infractions involving Cheetos.

Mac ‘n Cheetos
Burger King’s newest creation isn’t fried chicken circles or the kind of hot dog nobody has ever gone to Burger King for. It’s not even Burger King’s Kraft mac and cheese. This time, the co-conspirator is PepsiCo, and the result is macaroni and cheese–stuffed Cheeto puffs. To be clear, this isn’t about fried mac and cheese; we love and respect the stuff. This is about refraining from eating a respectable food encased in garbage out of a cardboard container. See also: White Castle Mac ‘n Cheese Nibblers, back on the menu nationwide last month. Boycott this blatant violation of macaroni and cheese rights — stand up for the elbows! 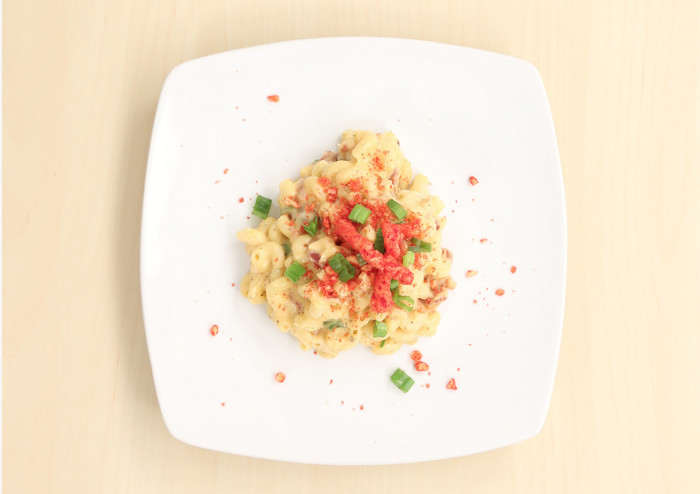 Hangover Food Built Right In
Nobody asked anyone to create macaroni and cheese–themed summer cocktails, but that didn’t stop comedy site Above Average from ruining a bunch of pasta and booze. Maybe we’d be down with a cheese powder–rimmed glass. Like, for a Bloody Mary? Nah, gross.

Henneroni and Cheese
Meet Chef Henny. He cooks everything with Hennessy, even though it’s definitely a bad idea. Ever feel like replacing both the milk and water in Kraft mac with cognac? Skip that whole mess and watch what happens instead.