New York pastry chef Pichet Ong grew up in Thailand, Hong Kong and Singapore and has toured the world extensively in search of the best things to eat.

When it comes to Mexican postres in America, desserts such as tres leches, churros and flan often come to mind. They can be found everywhere, even in non-Mexican restaurants. When Spice Market opened in New York City, flan and arroz con leche were menu staples, along with mojitos, margaritas, and tamarind sorbets. I realized then that many ingredients overlapped with a Southeast Asian dessert pantry, particularly when it comes to fruits and spices.

A decade later, I’m now working with Julian Medina’s Yerba Buena group of Mexican and Latin American restaurants, and my knowledge of the Mexican pantry has grown — but I’m still by no means an expert. I’ve reached out to several pastry specialists around to country with ties to Mexico to compare notes on what Mexican desserts mean to them, and some of their inspired recipes are featured here at the end!

But first let’s get to know some iconic Mexican desserts to better understand what’s out there today.

Tres leches is probably the most common dessert in Mexican restaurants and a favorite of every pastry chef I talked to. The direct translation of tres leches is three milks — with evaporated milk, condensed milk, and heavy cream used and served with butter or sponge cake that soaks up the flavorful milk. At Coppelia in NYC, I add coconut milk and serve it with seasonal fruit, such as Ataufo mangoes.

This is a staple snack in Mexico and can be found anywhere from cafés to the streets of Mexico City or New York. It is a fried pastry with a recipe similar to that of pâte à choux, often doubled up with eclairs in a panadería (pastry shop). It is usually eaten as a snack with café con leche or champurrado, a cinnamon-spiced chocolate drink thickened with masa.

Ate is a sweet and sticky jelly or paste made from quince and pulpy citrus. It is usually served with cheeses such as Mexican Manchego or Chihuahua as dessert in a typical Mexican home, or at breakfast spread over bread or stuffed in pastry.

It is a fried dough ball, the Mexican equivalent of a donut. Unlike churros, the recipe calls for yeast, and once fried, it is spiced with anise, sugared, or filled with fruit paste — guava and quince are the most common. In Mexico, this sweet specialty is soaked in syrup made from pilocillo (Mexican dark brown sugar) and cinnamon; it’s a staple at carnivals and during the nine days of observance prior to Christmas, Las Posadas.

Many variations of steamed custard with a liquid caramel top exist all around the world. In my book, flan has a pastry base and is the more common name in Mexico. Of the varieties, I love the thick, richy, egg-yolky version that many call Crème Catalan. In Mexico, flan Napolitano has added cream cheese for extra richness. My favorite is the dramatic flan impossible, a separated layering of cocoa cake and custard that happens when steam baking — it’s like getting two desserts in one!

In warmer climates south of the border, nothing is more satisfying than snow cones and popsicles. In Mexico, ice is shaved into a ball and then topped off with flavored syrups, sweet milk, or hot sauce. Paletas, now very popular in the U.S., are made with fresh fruit juice that is frozen and served on a stick. Fany Gerson of Dough and La Newyorkina makes delicious fruit-forward ones in flavors such as cucumber-lime, mango chili, horchata, and avocado-passionfruit. (Note: Her paletería is opening soon in the West Village!)

Some ingredients — or iconic pastries — that are being used now in American restaurants have roots in the Mexican pantry.  Here are some inspirations from pastry specialists across the country:

California-based pastry chef Luis Villavelazquez likes the floral notes, such as hibiscus and chamomile, in Mexican desserts. He also likes goat’s milk for its rich, savory profile that gives complexity to a simple dessert. It is commonly used as the base for making cajeta, a caramel that is widely used to sweeten Mexican desserts. Here he infuses goat’s milk with chamomile and serves it with roasted peaches and cinnamon crisp in a breakfast-inspired postre.

Pastry sous chef Margarito Lopez from José Andrés’s Think Food Group likes to play with canela, agua de Jamaica (hibiscus drink), piloncillo, tamarind, and dried chilies. At Oyamel, along with pastry chef Rick Billings, he took the inspiration from the strawberry margarita cocktail to reconstruct a dessert based on pairing of strawberries and mezcal in a hibiscus soup. He finishes it off with sal de gusano (a spicy, smoky salt condiment made from worms), which he uses to season the oven-dried meringue laced with freeze-dried strawberries.

While living in Mexico City, the Texas-based pastry vagabond Joe Baker remembers peeking into the bakeries and seeing rows of little puerquitos, or pig cookies. Deliciously dark and earthy with a hint of spice and a smooth, sweet glaze, these fun cookies top the list of his favorite treats from Mexico. There, each shop used a different-shaped pig — some had big, bloated hogs while others featured more elegant swine. Here, in his version of puerquitos, he uses lard for a fine crumb, and piloncillo, a dark brown sugar which imparts a gently sweet, toffee-like quality when cooked. (Tip: If using piloncillo, it has to be finely grated prior to mixing.) 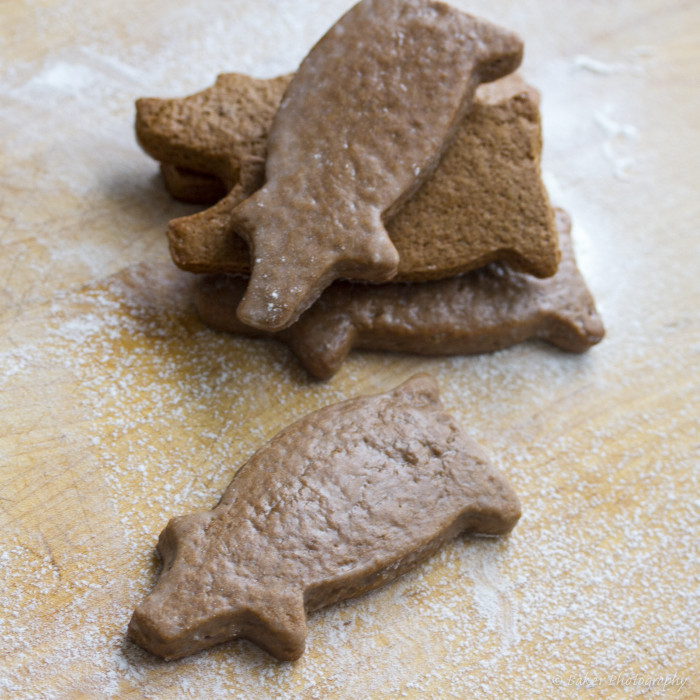 The poster child of Mexican pastry is pan dulce, which literally translates as “sweet bread.” I’ve long been fascinated with the idea of crusting bread with a cookie or another dough for that extra crunch and sweetness. Its origin for me is unclear; however, the first time I had something similar was at dim sum shop Tim Ho Wan over three decades ago. Since then, I’ve had other sugar shelled versions, such as pan de huevo, during my travels in Mexico. In Japan it’s known as Melon Pans and served on its own or with ice cream. Here in the U.S. conchas, meaning shells, can be found in many panaderias coast to coast, at 24-hour Latin diner Coppelia in New York City or in fine-dining restaurants, such as Blackbird in Chicago. At Winsome in Echo Park, California, I spotted a matcha concha, which inspired me to make one for myself. I enlisted another matcha and concha fan, Jen Yee, pastry chef at Lafayette, for additional styling. We tried different plate-ups but liked the idea of an ice cream sandwich with coconut and mango. You may soon find more varieties — perhaps with a black charcoal crust — in a bakery near you! 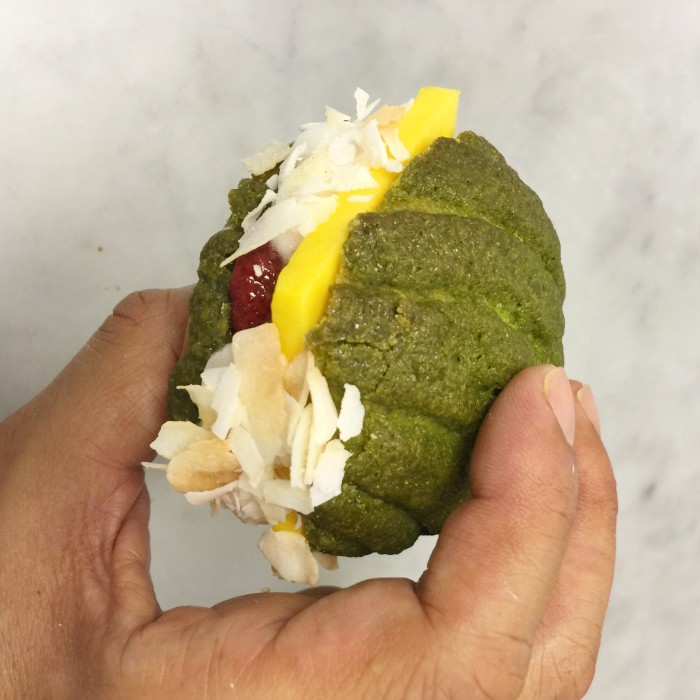