The next time you sit down at the counter of a breakfast spot during the weekend rush, take a look at the waffle maker. Chances are, the sides are going to be caked with countless drips of batter from hours’ worth of waffles pressed to order. Wasteful? Sure. Unsightly? Absolutely. And this waffle conundrum is where the Cuisinart’s Vertical Waffle Maker comes into play.

In the world of waffle-making, consistency is key in batter distribution, even browning and texture. By employing a vertical model that snaps shut with a rubber rim and a 12 o’ clock–positioned spout for pouring in the batter, this design aims to sort out the perfect waffle equation. 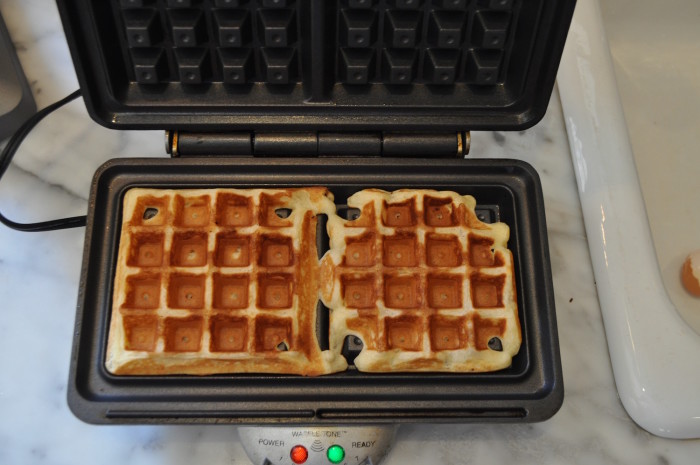 In the spirit of the scientific method, I embarked on a side-by-side, vertical and horizontal waffle-making experiment. For the control, I mixed up my usual batter: a couple of eggs, flour, sugar, baking powder and salt mixed until smooth with a stick of melted butter (swapping out vegetable oil for butter makes for both richer flavor and a crisper-crusted waffle).

The traditional waffle maker in this particular experiment is a no-frills Villaware waffle that I “borrowed” from a friend a while back and has somehow become a permanent fixture in my kitchen.

After unboxing Cuisinart’s Vertical Waffle Maker, I thumbed through the instructions — wipe down with a damp cloth before using, heat it up for a while before using to get rid of any unpleasant factory odors. With both waffle-makers set to the middle-of-the-road number-three heat setting, the testing was ready to commence.

The Cuisinart comes with an unmarked measuring cup designed to funnel the ideal amount of batter into the machine. It’s exactly eight ounces, so no worries if it gets misplaced in the gadget drawer. Batter application for the horizontal waffler is a guessing game that goes something along the lines of “ladle it in and hope for the best.”

Sometime after the four-minute mark, both waffle-makers sounded their alarms, signaling it was time to open and inspect.

Preoccupied with sticky kitchen-counter drippage, I underestimated the amount of batter needed for the Villaware, which resulted in skimpy waffles that didn’t quite reach the edges of the griddle. The top side had notable blond spots — telltale markers of an underdone waffle — while the underside was cooked to a crunchy mahogany. The end result was the breakfast equivalent of having a steak that’s cooked well on one side and borderline bloody on the other.

The waffle that emerged from the Cuisinart, on the other hand, was a thing of beauty. Golden brown and springy, it easily separated from the grates when I tugged lightly on a little tail made from a tiny bit of batter left in the spout. Texturally, it was spot-on, with every nook and cranny of the waffle cooked to the same doneness with a pleasingly crisp exterior. If we’re going to go back to the steak analogy, this one would be a perfect 130°F, medium-rare, seared through and through.

While some reviews lament the vertical waffler’s narrow opening as being inhospitable for adding chunks of fruit and berries, the difference here is huge, and Cuisinart’s vertical machine takes home the trophy when it comes to putting out perfectly textured, photo-op-ready waffles.