It took nearly six years for Robyn Lawrence to finish her first cookbook. Blame that on the signature ingredient. “You can only test one of those recipes at a time,” she laughs. “Otherwise, it never would have gotten done.”

Lawrence is the author of The Cannabis Kitchen Cookbook. Released in 2015, the 323-page tome is one of a dozen or so marijuana-themed cookbooks on the market today — a small but growing genre amid America’s changing attitudes toward the long-stigmatized (and still widely illegal) substance.

Her book tackles this distinct form of plant-based cooking a bit differently than most. “There wasn’t a book that really approached it from a healthy standpoint,” says Lawrence, a self-described “volleyball mom” from Boulder, Colorado. “There are a lot of books that approach it from a foodie standpoint, and there are a lot of them that are going to tell you how high you’re going to get. I wanted my book to approach it as, ‘I want to use this plant as a culinary ingredient and also a medicinal ingredient.’ It didn’t make any sense for me to always roll that into things that weren’t very healthy.” 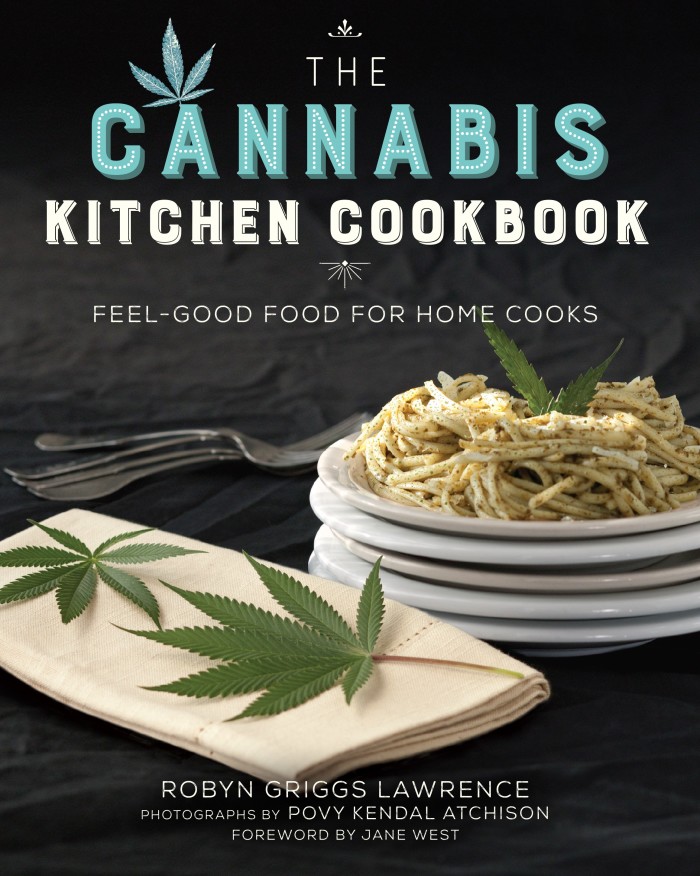 In other words: You won’t find recipes for indulgent things like brownies, cupcakes or chicken wings. Instead, there are sections on raw food, green juice and “the importance of working with the whole plant as opposed to using it as just a deliverer of THC,” Lawrence says, referring to the plant’s main psychoactive chemical, “because there is so much more to it.”

Lawrence describes cannabis as “one of the most nutritious vegetables that we have around,” full of protein, vitamins, zinc, magnesium and antioxidants. “It’s just an amazing superfood,” she says. “The whole idea is how to take advantage of this amazing superfood, not how do you cook to get high.”

On May 24, Lawrence is scheduled to lead an educational session on cannabis-based cooking during the National Restaurant Association’s annual international food-service trade show in Chicago. It might seem like a pretty mainstream audience for this sort of revolutionary subject, especially when you consider that Illinois is a far cry from the fully legal weed-flowing enclave that her home state of Colorado has recently become. (That means no cooking demos at the Chicago show, Lawrence confirms.)

But the author suggests that’s a big part of the draw. “Whether or not people are in the legal space, they’re watching this happen,” Lawrence says, noting that 23 states (including Illinois) currently have some type of medical marijuana law on the books and that an additional three to five could soon join Alaska, Colorado, Oregon, Washington state and Washington, D.C., in decriminalizing recreational marijuana during the upcoming fall elections.

“I kind of liken it to casinos,” Lawrence says. “States start to see that it’s going well and every other state is making money. I believe in the next five years, it will be federally legal. The smart people are getting on board early.”

Lawrence spoke with Food Republic at length about a number of cannabis cooking issues. Our discussion has been edited for brevity and clarity.

From a purely culinary standpoint, has there ever been another ingredient with the potential to revolutionize cooking like cannabis?
I don’t think there’s anything with this magnitude of being both food and medicine. Turmeric, I guess, would be the closest thing, being used in alternative cancer treatments and things like that. But not to this extent. [Cannabis] has the psychoactive element. It actually does work with our endocrine system. We’re built for this plant. It is very medicinal as well as culinary.

In the book, you talk about the importance of using organically grown cannabis. How do you know if your cannabis is organic? I haven’t been to Colorado in quite some time, but I can’t imagine seeing the USDA-certified organic label on this stuff just yet.
This, in my mind, is the biggest issue. Almost every week, it seems, for the past six months or so, we’ve had some sort of recall of raw cannabis that was grown with insecticides and things. What happens is, there is no regulation, so people are growing it with lawn chemicals, which is horrifying when you consider that people are not only using it as food but as medicine. There are independent organizations that are coming up, such as the Organic Cannabis Association. That’s a good thing to look for, but they still haven’t made huge inroads yet.

This is a huge part of this whole thing, educating people to be smart consumers. You have to go in there and ask very pointed questions. One of the biggest issues here, because prohibition really forced growers underground, is that so much of it is grown indoors still. And so you’re having to use these synthetic cultivation systems; you’re having to force-feed the plants with nitrogen, phosphorus and potassium fertilizers. None of those are healthy for human consumption. This, to me, is the biggest issue and why I believe it should be federally legal, so we can start to put in place some regulations, standardizations and organic certifications.

Up front in the book, you name-check some strains that are particularly good for cooking, and there are a lot of them, page after page after page. Are there some strains that are not so good for cooking?
It’s kind of a personal preference, but I generally don’t love the sours, just because it’s a rough taste to cook with. Something like a Sour Diesel, which, in the name, there are two things that I’m unsure about incorporating into the cooking. So, you know, any kind of a diesel, where it has that fuel-y kind of taste, those are the ones to stay away from.

Is there one main go-to strain that is good for cooking all sorts of things?
One of my favorites and the one chefs that mention probably the most is Golden Goat. It’s a pretty readily available strain. And it’s a very uplifting, Sativa-dominant strain. It’s got kind of a sweet tropical flavor to it that is pretty versatile. I grown my own now, so I don’t buy as much as I used to, you know, retail. But when I see that, that’s usually what I pick up. It also depends on what I’m cooking.

Talk to me about the issue of decarboxylation. I’ve interviewed another cannabis cookbook author who is very adamant about “decarbing” cannabis prior to cooking. Your book takes a more agnostic tone toward that.
Well, I mean, it’s so controversial, and it’s interesting because this is one of the things that I’ve had hours and hours of conversations about with the chefs that I worked with. If you want to have the strongest potency as far as psychoactivity, decarbing is definitely going to make it stronger. I’ve done it both ways, I’ve talked to people who’ve done it both ways. My sense is, if you’re making an infusion, you’re going to being heating the cannabis enough through the infusion process anyway. Now, if you’re making something like a tincture, where you’re not going to be heating it, you’re just putting it in the alcohol and letting it macerate, I definitely decarb. It also comes back to the question of, what are you using it for? If your entire motive here is to get as psychoactively stimulated as possible, then sure, decarb. But if it’s really to pull the terpenes and the cannabinoids and the flavors and have the health benefits, then, to me, it doesn’t seem necessary.

There’s another section in the book about cooking with the spent cannabis material from your vaporizer, the so-called ABV (already been vaped) stuff. It’s less potent than raw cannabis, as the book points out, but doesn’t this also impact the flavor?
Yes, it does. It’s going to be less strong and less flavorful in general. I don’t really vape, so I don’t really have it. But I have tried it. It works. What a lot of people are doing is kind of keeping the stuff and sprinkling it in and not even using it to make another infusion. It’s kind of one of those things that if you were counting on a super-potent recipe, then I wouldn’t use that. But if you want to make use of every single drop, it doesn’t hurt to have it on hand.

Since the book has come out, which recipes have proven the most popular?
The curries! Which surprises me. There’s a couple — the spinach and potato curry and the eggplant and lentil curry — people love those. The cannabis avocado mousse is also one that lots and lots of people have made and commented on. Interestingly, the Highland Yogi Smoothie, I think people are looking for easy breakfast foods. That’s been something I’ve gotten good reviews about. Then I think people are super-excited to find something they can do with the fan leaf [a less desirable part of the cannabis plant than the more potent flowering buds]. That Fresh Fan Leaf Pesto is a big hit, especially at harvest time.

What about your personal favorite?
I would say the Fan Leaf Pesto. It can be made with an infused coconut oil, or a non-infused coconut oil. So when I’m not looking to kind of get high, I’ll have [the non-infused variety] because I’m getting all the other benefits of the plant. When you use the raw fresh leaves, you’re getting every single part of the plant; you’re not pulling anything out. So that, to me, is one of the healthiest, best recipes.

Now, you came to this because of your own health issues. How has this learning-to-cook-with-cannabis process affected your well-being?
I think I’m a nicer mom and a better colleague. It has helped me so much. This is always a little awkward to talk about, but my prescription [for medical marijuana] was actually for dysmenorrhea, which is severe menstrual cramps. What I found that it helps with as much as anything else, and this is what I think is the beauty of this plant and how versatile it is, is the crazy hormonal wackiness. Those black dark times that came with that — this eliminated that. And I tried everything just to get to that point. I tried homeopathy; I tried pharmaceuticals. It was a really big problem that was slowing down my life, and now it’s gone.

Because I came to this kind of later in life, I kind of always just thought of cannabis as something for getting high. What I’ve learned since then is this whole idea of microdosing, and the idea that the exact right dose is not what’s going to get you super-high but what’s going to take care of the issue at hand. A little bit of this stuff goes a long way.

How has your life changed socially since you became known as one of the nation’s preeminent cannabis-cookbook authors?
[Laughs] The biggest thing for me is that I didn’t get swept up into some sort of stoner crowd. The people I’m working with now, these are moms, these are patients, these are doctors. To me, the people for whom this is saving their lives or their children’s lives, that’s really why I’m doing this, and why I think I need to.