Passover, which begins on April 22, is almost here. We’re excited for the main event, whether it’s classic braised brisket or crisp kugel, mazto ball soup every which way or hearty stuffed vegetables. It’s one of the greatest feasts of the year, so gather up a group and plenty of wine and check out these 12 recipes for a truly impressive Passover feast.

When I came up with the pomegranate brisket, it really just seemed like a good idea at the time, combining two flavors that would fit naturally together. I thought it might taste good, experimented, and turned out with a really great dish. It’s good for Rosh Hashanah because it combines two classic holiday foods and balances the savory character of the meat with the pomegranate — which provides something sweet to symbolize a sweet new year.

As with any food that comes in both homemade and boxed mix versions, matzo balls are best made from scratch. Just imagine how much prouder you’ll be of your impressive, light-as-air matzo balls this Passover, or anytime you want to impress that certain someone’s bubbe.

Potato kugel has been a mainstay of traditional Ashkenazi cooking. In the past, kugels often had a leaden, gluey, grayish inside. My mission was to change that image and bring the now golden potato kugel crisply and joyfully into the 21st century.

If there were ever a food that was completely polarizing, it would be gefilte fish. People either love it or hate it, the latter often being those who haven’t tried it until they were adults. The good news: Making it with fresh salmon and whitefish yields a gefilte fish that is nothing like the kind you’re picturing submerged in a jar of fish jelly.

If you’ve got flour and water in the house (we’re presuming you have salt), you have what it takes to turn that pizza stone you never use into a matzo-baking operation.

Strictly speaking, a Hasselback potato would be a regular white potato, skin left on, flesh slashed and stuffed with bay leaves, then roasted in the oven. The idea translates wonderfully to sweet potatoes, which open out as they roast, ready to soak up lots of maple syrup, chili, lime, and sour cream. 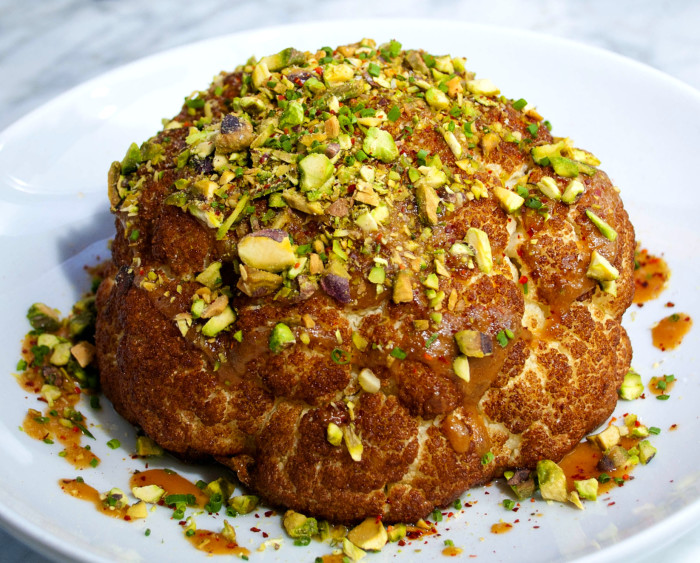 One of the dishes that influenced me the most was Jean-Georges’s scallops with cauliflower and caper-raisin emulsion. I thought the flavors and textures were perfect. So when my chef de cuisine, Chris Cipollone, made brown butter–basted cauliflower for a vegetarian entrée, I instantly thought to pair it with raisins. I then decided I needed acid to counter the sweetness and added red wine vinegar. When I tasted it, the texture wasn’t silky enough, so I added white chocolate to smooth it out. It was perfect, almost. Then I felt it needed spice but not harsh spice, so I added piment de espelette, a chili from the Basque region of Spain. For crunch I added pistachios. The dish was extraordinary.

Just because haroset is supposed to look like cinnamon-flavored mortar doesn’t mean it has to taste like it. Chef Jonathan Waxman, culinary advisor to NYC’s Rosa Mexicano, loaned an expert hand to the restaurant’s 10-year running tradition of hosting Mexican Passover. This recipe is no exception. Incorporating more fruit and textural elements than your traditional apples-and-walnut mix, Waxman’s haroset is bright, rich and perfectly balanced.

We love fish soup. One long-ago Passover, we suddenly wondered, “Why don’t we make matzo ball soup with fish stock instead of chicken stock?” This saffron-colored variation on a traditional theme has now become our standard. The list of ingredients may seem long, but most of them are simply thrown in the pot, boiled, and then strained. Don’t be daunted by purchasing a 3- to 4-pound ocean fish! If you are using the fish head, you don’t need to remove the gills — contrary to popular belief, we haven’t found them to add any bitterness.

I’ve been obsessed with Jerusalem Kugel, or Kugel Yerushalmi as it’s known in Hebrew, ever since I spent a gap year between high school and college in Israel, where takeout-food proprietors lay out a staggering spread of food to sell for Sabbath meals. Unlike the kugels most of us are familiar with from Rosh Hashanah meals or Yom Kippur breakfasts, this Jerusalem Kugel packs a wallop of heat thanks to a pile of black pepper. The surprising level of spice — especially for an Eastern European dish — creeps up on the palate, serving as an organizing principle for a mellow sweetness that comes from a simple caramel you make at home.

Gefilte fish has it hard. Nobody eats it other than the obligatory slab before the good Passover stuff comes out. Nobody wants to eat an obligatory slab of anything suspended in a jar of cloudy gelatin. Be that as it may, gefilte fish on Passover isn’t going anywhere. So Rosa Mexicano, NYC’s spot for haute south-of-the-border, called upon cuisine culinary advisor Jonathan Waxman (Barbuto) to update it, Waxman uses red snapper in place of …well, whatever goes into traditional gefilte fish. But we’re never above a fresh, all-natural version of something usually packaged. 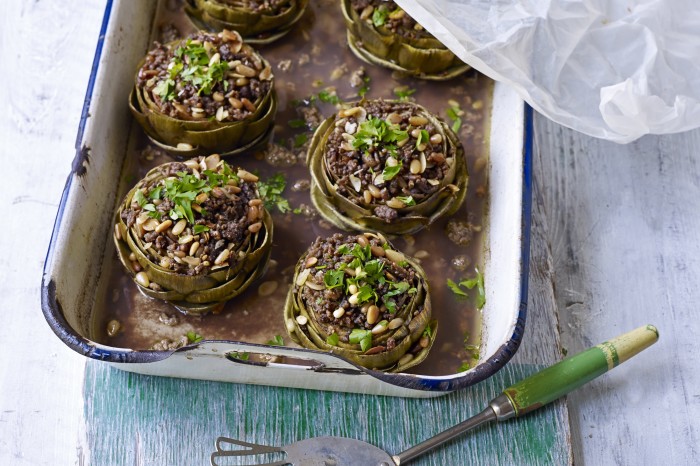 Nobody in Nazareth prepared artichokes this way; my mother brought the idea back from a long weekend away in a nearby town. When I arrived in the States, I found that my Syrian friends had long been making stuffed artichokes with spiced meat and pine nuts — and I realized just how much my mother’s cooking was influenced by neighboring nations.