Tedious kitchen tasks are the mother of invention. That might not be the exact proverb, but it’s the concept that stocks the shelves of so many kitchenware stores with avocado slicers, cherry pitters and more recently the LooseLeaf and Zipstrip, two chlorophyll-hued gadgets from the folks at Chef’n. Both products come in at around $8 and aim to alleviate the monotony of stripping herbs of their inedible stems and relieving kale, collards and other leafy greens of their unpalatable ribs.

In theory, these are the kinds of tasks that can be easily accomplished with a chef’s knife or even a pair of able hands. As a home cook with not-too-shabby knife skills and a soft spot in my heart for mindless prep, stemming herbs and greens was never a particularly big mealtime bummer, nothing like shelling hard-boiled eggs or scaling fish — Chef’n, are you listening? But after chatting with a few other cooks about testing out these products, I discovered that my tolerance was on the high end for these particular tasks and the concept behind these two held plenty of appeal. And so I stocked up on two varieties of kale (classic curly and Tuscan) and grabbed a couple of bunches of rosemary and thyme.

With stems that range from thread-thin to dowel-thick, I started with thyme. Instead of individually plucking the tiny leaves, I tend to throw whole stems into whatever recipe I’m tackling, letting the heat do its magic and pulling out the spent herbs just before serving. So in theory at least, the Zipstrip, a little plastic measuring bowl outfitted with a hole-punched handle, could be a game changer.

Potato salad with a thyme-mayo dressing was on the menu that evening, so my thyme workaround wasn’t an option. I gave the thyme a quick rinse and dry before pulling the delicate stems through the Zipstrip. 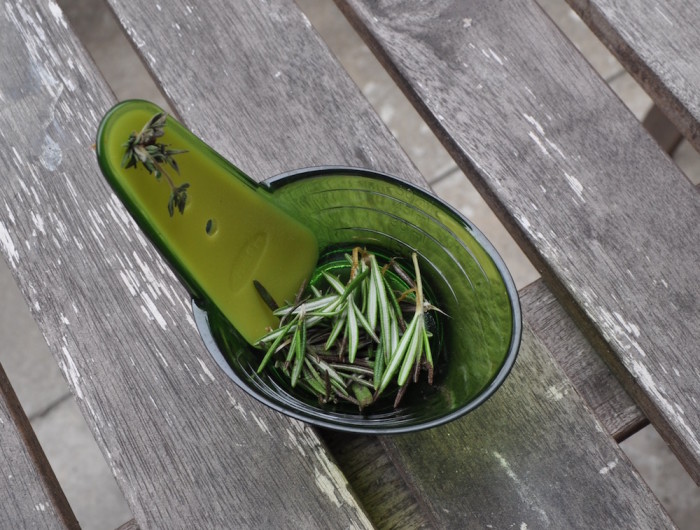 Stem one glided through the smallest of the four holes on the Zipstrip with the leaves bending but refusing to release into the attached bowl. I attempted to double up, thinking that a tighter fit would assist in the process. No dice. I went through about a dozen stems of thyme, pulling them headfirst and backward, quickly and then slowly. Just a few leaves hit the bowl and a few more showered the counter before I retired the Zipstrip out of frustration and de-leafed a teaspoon of thyme with my thumb and forefinger.

Thyme might have proven to too worthy an opponent for the Zipstrip, but rosemary fared better. The sturdy stems glided through the opening, their leaves landing neatly in the bowl, which is marked with measurements ranging from one tablespoon to a quarter cup.

Rosemary and the Zipstrip are a match made in heaven, but when it comes to multi-utility, the Looseleaf is a much wiser $7 investment. 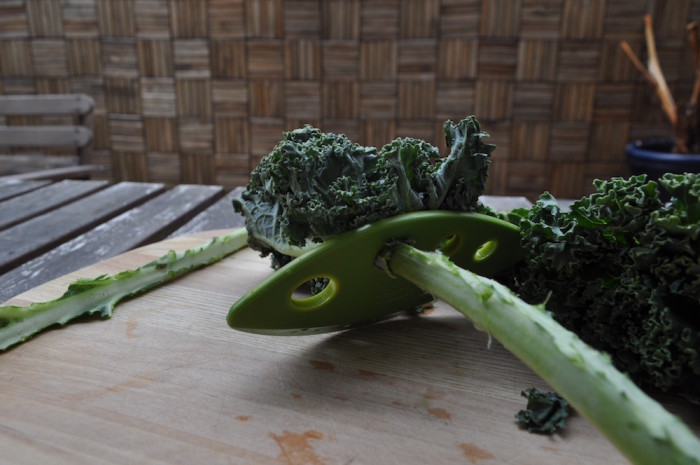 I ran a full bunch of kale through the LooseLeaf in a matter of seconds. The stems pulled through easily (even easier if you snap off a bit of the bottom to make them thinner) and came out clean as a whistle with the leaves of kale essentially de-boned and ready to chop into a Caesar, smoothie, batch of chips or virtually any virtuous leafy green preparation your heart desires. 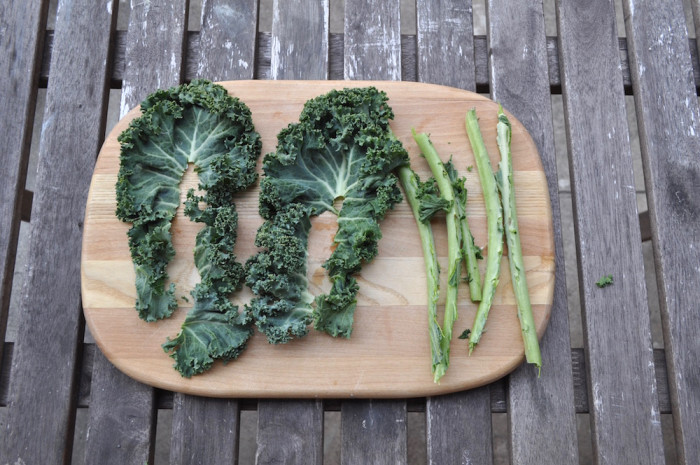 The question that always arises when purchasing a kitchen gadget is always something along the lines of “Am I actually going to use this thing or is it going to sit in a drawer taking up valuable space and collecting dust?”

When it comes to the Zipstrip, I’m going to give it a hard “no” since it’s got no game when it comes to stemming tender herbs. On the other hand, the LooseLeaf impressed in a very real way, conquering a bunch of kale in a neater, faster and cleaner fashion than a knife and cutting board. And since it’s outfitted with smaller holes meant for herbs, it’s a two-fer, meaning that if you’re ever in the market for a tool that can reduce a full rosemary bush to a pile of leaves in a matter of minutes, the LooseLeaf has you covered.

Priced at $7.99 each, the LooseLeaf and Zipstrip are available via chefn.com.