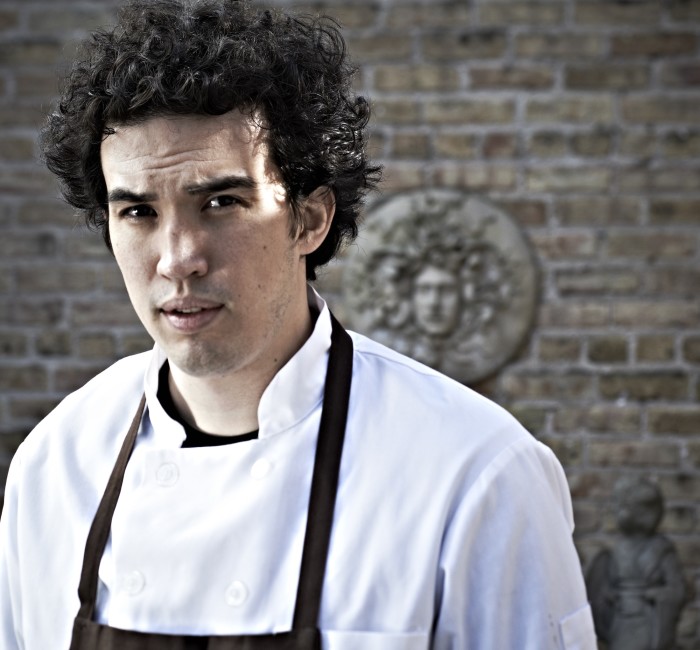 Erling Wu-Bower is the James Beard–nominated chef de cuisine at Nico Osteria, the newest concept from renowned Chicago restaurant group One Off Hospitality. With award-winning restaurants Blackbird and the Publican, and the delightful honky-tonk Big Star, One Off is no stranger to risk. Opening bold concepts in neighborhoods where nothing remotely similar exists, they’re constantly challenging the palates and expectations of their diners.

Nico Osteria is no exception. Situated deep in the heart of Chicago’s steakhouse culture and located directly across the street from the iconic Gibson’s, Nico Osteria is dishing up refined, traditional Italian with a heavy emphasis on fish.

Here, Wu-Bower nerds out with us on the finer points of fish butchery, Italian classics and the changing landscape of the city’s hospitality. Oh, and cheap takeout.

How do you convince people to eat fish in a town that eats steak?
I run into that exact complaint all the time: “I don’t eat fish.” I mean, we cook really good seafood. When somebody comes in and says, “I don’t like salmon,” we send them salmon. “Check this out. Here’s all your crudos, and this one salmon crudo.” Then they’re like, Oh, my God, this is really good.” It’s not salmon killed in your mom’s oven at 550°F for half an hour. Sorry, moms. [laughs]

I initially proposed the idea to Paul [Kahan] and Donnie [Madia], the owners of One Off, and they were like, “There’s no possible way that’s going to work.” I think what happened was that slowly we began to see the Chicago diner educated over the last six years in a really interesting way through food media and Japanese cuisine. At the Publican, which I opened as a sous-chef, I really pushed hard, not only for a pork and oyster section of the menu — if you look at the menu, you realize there’s quite a lot of meat on it as well — but a seafood-centric portion of the menu that was just as large. It sold like crazy.

You’ve said that you’re obsessed with fish butchery. How does that affect the general approach here?
I’m definitely obsessed with butchering, and fish in general. But I’m really obsessed with the supply lines because that’s the most important part. How do I get it here, how do I get it as fresh as possible? And once it gets here, what do I do to keep it fresh? We don’t live in a vacuum. It’s not like I can get a fish and serve all 60 pounds tonight. Why does this fish keep better than that fish, even though they looked the same when they came in? I can safely say that I’m a FedEx, UPS and Southwest Airlines shipping expert. I know all the guys at Southwest Airlines cargo at Midway Airport. We’re on a first-name basis.

You use the term “fair fish butcher.” What does that mean?
I consider myself a fair fish butcher. The Japanese have this concept of individual care of every little piece of their life, which also translates to fish execution, for lack of a better word, in a process called ike jime. Ike jime is a very specific way of killing a fish. You sever the head from the spinal cord, so the brain isn’t sending death messages to the spine, then you put a wire through the spine to take out all brain matter there. It sounds gruesome, but it’s actually the most respectful way.

For example, I might get a striped bass that’s 18 hours out of the water from Boston. First off, a Japanese fish is better when it gets to me; it’s also way better two days later, and that’s all because of how it was killed. There’s also another problem: You can educate fishermen on the East Coast how to ike jime kill a striped bass, but that’s not how the industry is set up. The industry is set up on volume. When you have a container full of 1,000 pounds of striped bass, what do you think the fish on the bottom looks like? It’s not pretty. It’s a question of teaching fishermen — and we’re not even close in America — the way you kill each individual animal is important, not just ethically, but financially, and that requires a lot of change.

Fish butchery is a beautiful art and a science. Though [Nico] is an Italian restaurant, all the chefs use Japanese steel and knives and read tons of Japanese fish blogs.

You have a very diverse background: Your mom is Chinese and your dad is Creole. You began under the tutelage of Mexican master Rick Bayless, and now you head an Italian restaurant. How does that all impact your cuisine?
When I spent six months in Italy when I was in college, I didn’t just fall in love with Italian food — I fell in love with Italian life. I was intellectually growing up. I was a philosophy major and a history minor, so I was in Rome. This is the continuation of that dialogue. The other food dialogue in my head — I’m not strictly an Italian cook — has to do with family. My mom is Chinese, Rick cooks Mexican food and my dad cooks Creole food.

What all of those cuisines — Creole, Chinese and Mexican — have in common is that they pack immense amounts of flavor into each molecule, which the Italians don’t do. Italians really can’t take spicy food. They can’t even take hot-temperature food. They don’t like vinegar. It’s a very plain cuisine. What I think I do well here is take the Italian techniques that I’ve learned and pack in way more flavor than people are used to. There needs to be a pop in every dish. People don’t go out — and this is something that Rick said — to eat what you eat at home. They go out to eat to be impacted by flavor.

You make all your pasta in house, right?
Everything but the lobster spaghetti we make in house, because there are some things that the Italians have been doing for 1,500 years, and they should be respected. We get our spaghetti from Gragnano, which is a town outside of Naples.

Tell me about your crudo.
Crudo makes my job easy. Different fish should be cut properly to express the texture of the fish properly. Bring out the best fish in the world, cut said fish, cut it again and put it on a plate. The Japanese are actually really good about that. They don’t do anything to it. They have a general belief about food: Why would you mess something up that’s so good already? Cooks bring me these really intricate crudo dishes, and I’m like, “Let’s just take all this off. What are the two things you really love on this plate? That’s it. Why are there seven other things on this plate?” Same thing with crudo. I’m a bit of a slave to formula on that part of the menu, I must admit: It’s just heat, vinegar, olive oil and something sweet.

What are some of the crazier things you’re working on or testing or playing with right now?
I take pride in my lack of craziness when it comes to [my cuisine]. I don’t subscribe to food trends. I just don’t. I don’t read about them; I don’t participate in them. I think that most good stuff has been done before and that we should pay homage to those who’ve done it before by researching them. It’s funny, you might think, “Oh man, that’s a crazy idea that would probably work inside of a ravioli.” You put it inside a ravioli and it’s terrible. The thing with pasta, and Italian cooking in general, is that one small difference can make so much of a difference in the end product because there’s no disguise.

You’re really adamant about Nico not being a “hotel restaurant” even though you’re part of the Thompson hotel. I would argue that even though you’re not a hotel restaurant, you’re pushing the boundaries and redefining what a hotel restaurant can be.
I’ve learned that that was the wrong angle to take, if I might make a confession. I think the point that I would like to make and still make and was trying to make but used the wrong words for, is that I’m not going to be beholden to a hotel structure. A lot of the times you go into a hotel and that’s just “the way things are.” And my point is that’s actually not the best for the customer that we can’t reprint menus, or it’s actually not best for the customer that this is the way that it’s been done again and again.

A lot of chefs will find themselves in my shoes in the future and will be very smart to know that the hotel has a lot to offer you, which is a lesson that I learned. If this hotel is full and all the guests come to dinner that night, I don’t have to go out and get reservations. Focusing on the positive, there’s a ton to learn from hotels. Why do I need to teach the bellman what’s on the menu? Because he’s actually the most important point of contact in the entire hotel. That’s a fascinating point to me. I would slightly amend my statement: This is not the kind of hotel restaurant you’re used to. It’s a restaurant that’s in a hotel, and we have a great relationship with the Thompson, but it’s not the hotel restaurant that you’re used to seeing.

What do you cook for yourself when you’re at home?
Such an embarrassing question. I eat crap. I have a five-month-old son, so I’m eating a lot of peanut butter and crackers right now. Slices of turkey with hot sauce on them rolled up. I stopped cooking at home when I became a chef. When I was a cook, I cooked a lot at home. When this kid was born, I started cooking a lot again. I cook the classics. I like braises. I cook one-pot wonders. I eat a lot of pasta just because it’s easy…. And my lady absolutely loves Bolognese, so I make a lot of Bolognese. I make a lot of curries, again because of their ease. If you just sear meat right, throw a couple of vegetables in there, have some rice, it’s wonderful.

I should admit this: I also have this terrible addiction to cheap delivery sushi.