If you’re like me, the first couple of times you heard about beer “on nitro,” your assumption may have been that this beer was brewed by none other than the indomitable Danny Lee Clark. Or perhaps it was physically on him in some form, and that’s what gave his skin that blinding 1993 sheen?

Over time, I started to piece it together. As I heard this term more and more, a little voice whispered, “Waaait a minute, this beer has almost nothing to do with ’90s-era beefcakes or Toyota Supras,” and with that cleared up, I noticed that one or two tap handles always seemed just slightly nonconformist: slightly more elongated than the rest, occasionally with a perpendicular black spigot, while the other taps appeared to be plain stainless steel or brass, pitched at an angle.

Whether you noticed this detail immediately or took the scenic route like I did, there is no doubt that nitro tap lines have been popping up at craft beer bars with increasing regularity. But is it only for certain beer styles? What does nitro do, and how does it do it? And who’s doing it right now? It may surprise you to learn that none other than Jim Koch, godfather of the modern American craft beer movement, founder and chairman of the Boston Beer Company, was kind enough to clue me in on some of this.

At the moment, his Sam Adams line is in the process of launching a coffee stout, an IPA and a white ale that’s already available on draft. The company’s state-of-the-art, research-intensive “nitrogenating” cans contain a gas-releasing widget at the bottom that activates when the tab is popped. The company is also rolling out a new line of glassware designed for enjoying the enhanced nuances of nitro beer. The bowl is larger to accommodate the thicker head, the lip of the glass curves outward instead of straight up to allow the beer to flow freely past the foamy head, and there are “dimples” specifically focused on triggering “cascading” — a phenomenon witnessed when nitro beers are poured (more on that later). Given that only a handful of nitro beers exist in the U.S. craft market, Koch jumped on the opportunity to interpret this brewing technique himself. 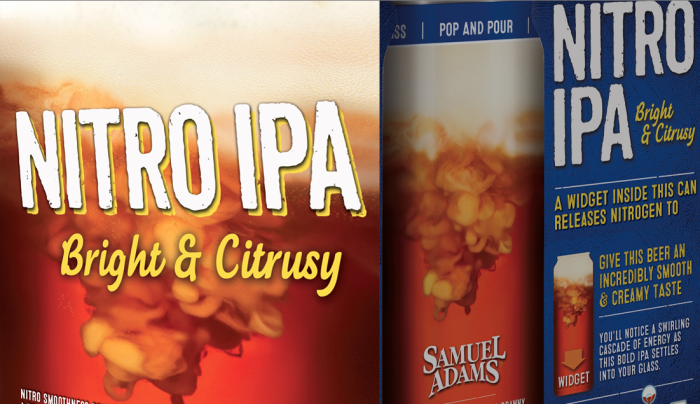 “With carbonation, you get a tongue sting and a biting aspect to a beer, but what happens if you don’t have that?” Koch says, going on to emphasize how a higher ratio of nitrogen (roughly 70 percent nitrogen to 30 percent carbon dioxide) dramatically shifts the flavor profile of a beer, a difference he likened to that between tap water and seltzer. Both present very different flavor experiences, despite being basically the same thing. “Carbonation is essentially the biggest ingredient in beer that nobody talks about,” Koch says — it’s the unspoken ingredient. Recipes are built around CO2’s effect on the overall flavor. What if that were suddenly absent (or in this case swapped out in large part for nitrogen)? My inner beer monologue begs the question, “Does this change what you were drinking from a carbon-based life form to a nitrogen-based one?”

So what’s actually going on in these beers that makes them different? It’s science time. Nitrogen is mainly insoluble in liquid, resulting in a “nitrogenated” substance that retains more viscosity than traditionally carbonated beer, as carbonation dissolves more readily. This is the foundation for the creamier mouthfeel of nitro beers, which also lends to a smoothing out (some call it “muting”) of the flavor spectrum. In addition to solubility differences, the draft delivery system plays a big part. A bar owner looking to serve these beers will install a special draft line, gas regulator and faucet that will include a perforated disc, known also as a “sparkler” or restrictor plate, for the beer to pass through.

When nitro beer is dispensed through the faucet, it exits a system that is pressurized at a higher level than a traditional line, then enters the outside atmosphere of your glass, experiencing a dramatic drop in pressure. The higher-pressure system and lower liquid solubility of nitrogen, along with the beer being pushed through that perforated restrictor, generates multitudes of tiny bubbles much smaller than those experienced with a normal CO2 delivery system. These components combined are the source of the enhanced mouthfeel, smoothing out of flavors and engaging visual scene that unfolds before you as the bubbles create a “cascading” effect that seems to roll downward along the inner sides of your glass, eventually coming to rest in the pronounced color bands separating the body and thick head of foam that accumulates at the crown. It’s a beautiful thing.

Nitro beers in the past have been associated most closely with styles known for heavier malt characteristics  — stouts, porters, Scotch ales — but there is no real reason that an IPA can’t be nitrogenated; brewers simply haven’t prioritized its development yet. A nitro beer can be of any style, and Sam Adams’ nitro line is a great example. It may be a challenge to achieve balance given the unfamiliarity with the flavor effects of the tweaked nitrogen ratio. But then again, when don’t craft brewers pursue the more unwieldy challenges (Koch once famously bathed in beer mash) if for no other reason than for the sake of breaking with convention and forging new paths? Without that, how else will we arrive at a world where we can drink our beers in Atlaspheres, or joust with each other on pedestals, in unitards, a pugil stick in one hand, and in the other: a shiny can of Danny Lee Clark’s latest nitro offering.