Pepper is a pretty amazing spice. It was one of the linchpins of the ancient spice trade and the source of a lot of flavor-based fighting. With that considered, we sort of take it for granted. Even the trashiest diner has a little shaker of ground pepper on every table. But did you know that there’s way more to pepper than those flat-tasting black bits? Please note: I love diners, just not their crappy pepper shakers. Let’s fill our mills with something a little better. 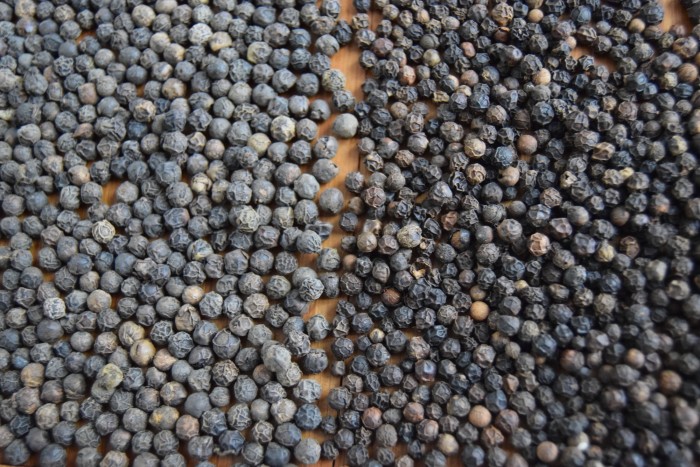 This is the stuff you know and recognize: little black pellets. They’re the dried fruit of a flowering pepper vine. To produce black pepper, the unripe berries are harvested, cooked and dried — and sometimes just dried in the sun without cooking. This plant is originally native to southern India, but it now grows in many places throughout the tropics, and depending on where it’s grown, you’ll get different varieties.

Tellicherry (at left in the photo above) is probably the best-known variety. It comes from India and typically has larger specimens than other black peppercorns, with a very complex flavor profile. Malabar pepper comes from the same area as Tellicherry, but they’re picked less close to ripeness and are a bit more pungent in flavor. There are also other varieties of many origins, including but not limited to Sarawack (Malaysia), Lampong (Sumatra), Vietnamese (take a guess) and Talamanca (Ecuador, above right). These all have different nuances based on terroir, climate and harvesting practices. 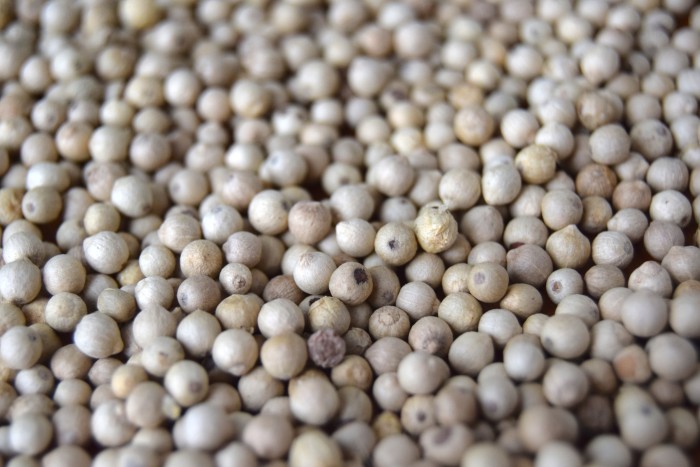 These begin the same way as black pepper, except the fruit is soaked in water after harvest until the skins soften and are removed. These taste similar to black pepper but lack some of the pungent flavor. They are usually used in cream sauces, mashed potatoes or any other uniformly light-colored dish where black pepper would visibly stand out. Like black pepper, there are different varieties of white peppercorns, and many share names and regions. 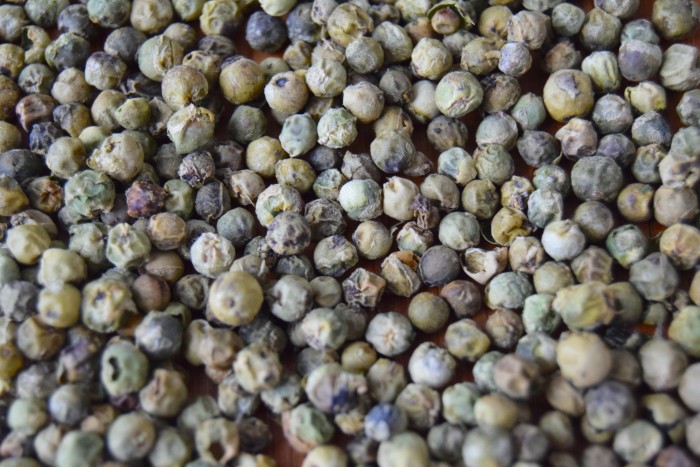 These fruits are picked while immature and unripe (hence the green color), then either air-dried, freeze-dried or brined. They’re aromatic, with a fresher, fruitier flavor than white or black pepper, but not nearly as sharp and astringent as black. This is the original pepper used for steak au poivre and other classic peppercorn sauces, and brined green peppercorns are popular in French cuisine. 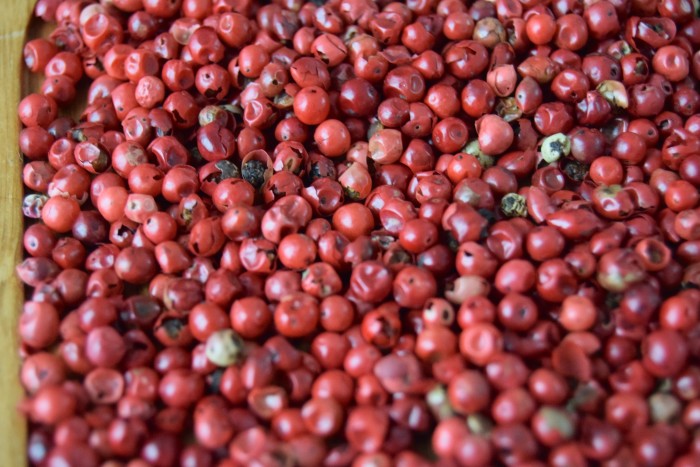 These don’t come from the standard pepper plant that produces the above three varieties, but from either the Peruvian (Schinus molle) or Brazilian pepper tree (Schinus terebinthifolius). They’re similar in flavor to black pepper, but milder, a tiny bit sweet and highly fruity. Pink pepper adds great color to whatever you’re making — I’ve recently become a regular user of these in my cooking for both flavor and aesthetic reasons. These are actually more closely related to cashews than black pepper from the standard vine (science!), so be wary if you suffer from tree nut allergies. If you like to live dangerously, however, take note: These lack the “generally recognized as safe” (GRAS) label from the FDA. 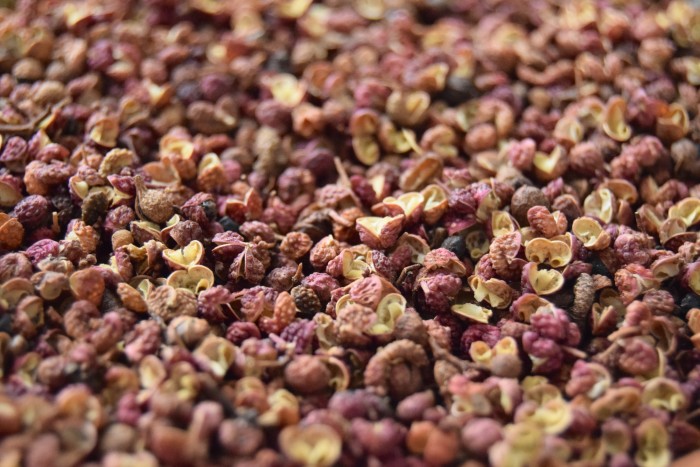 These are an essential ingredient in a lot of Chinese cuisine (and that of surrounding areas such as Nepal, Bhutan and Tibet), including the legendary five-spice blend. They are not at all related to the other peppercorns, and the flavor lacks the pungency and bite of black, white and green pepper. It’s more citrus-forward, with gradually mounting heat that leaves your mouth feeling deliciously tingly. 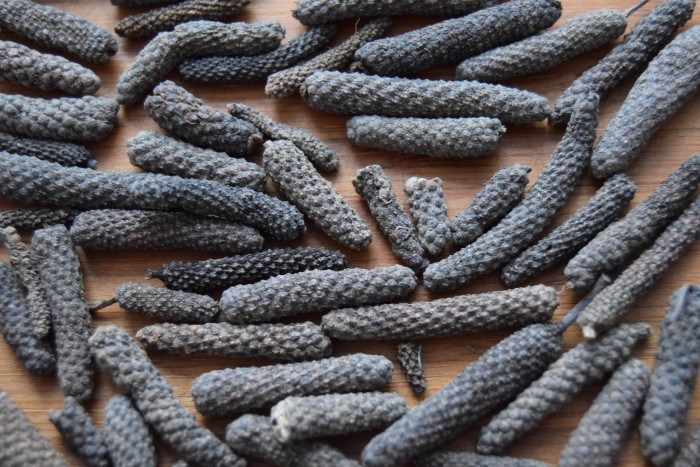 The first thing you notice about long pepper is it’s powerful sweet-spicy fragrance. Not a peppercorn, the usable part of this plant is actually a flower spike coated in tiny poppy seed–size fruit. They taste a lot like black pepper, with some extra heat. You’ll see them called for in many Indian, Nepalese, North African, Malaysian, and Indonesian recipes. 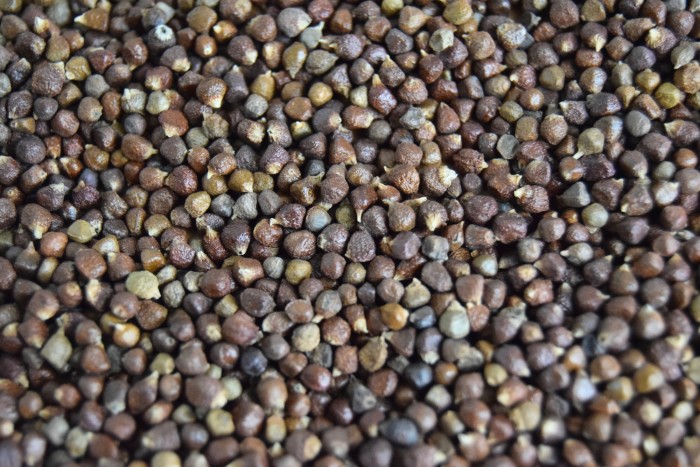 These are also not peppercorns, but the seeds from a plant in the ginger family, though they are sometimes referred to as Melegueta or “alligator” pepper. Grains of paradise have a peppery flavor that’s a bit citrusy and are often used in North and West African cuisine. It’s also a popular flavoring agent used to flavor craft beer and spirits.