For many, radicchio has been limited to the occasional sighting in the container of mixed greens you buy at the grocery store. Aside from adding a pretty red streak, it gets lost in the melody. It’s time to let your radicchio shine and give this leaf a new lease by showcasing it on your plate. Winter is when it’s best, and you can do anything with it, from grilling to serving raw to stuffing with all sorts of tasty things.

If the name radicchio (pronounced ra-DEEK-ē-ō) sounds Italian, that’s because it hails from northern Italy’s Veneto region. Veneto remains the world’s top producer, and though it’s been cultivated there since the 16th century, the history of radicchio goes back to at least 50 AD. This is when Gaius Plinius Secundus, more commonly known as Pliny the Elder, wrote about the plant in his famous tome, Naturalis Historia (the largest surviving book from the Roman Empire). The naturalist and philosopher stated that this vegetable could be used as an aid for insomnia as well as to purify blood — plus, it tastes good when paired with fatty meat or cheese!

Aside from the rich history behind the plant, one of the coolest things about radicchio is found in the color. Originally, the bulbs start out as a vibrant green, but through cultivation and careful farming, they turn a brilliant red with white veins. This process started in 1860 when Belgian agronomist Francesco Van den Borre engineered a way to produce a vibrant-hued varietal with less-bitter leaves. He did this using a technique called imbianchimento, whitening or blanching, a process that involves cutting the first heads from the root and allowing a second one to grow and mature in a dark shed. This causes the green to turn a deep red and the veins to stay white. It also has the added magic of giving the plant a milder flavor.

Though you can buy radicchio in stores year-round, the vegetable’s prime season is December through April. This is the time you’ll see it in the markets, making it a great winter salad option as well as a unique side dish.

Pick radicchio the same way you would any leafy vegetable: look for firm leaves with little to no browning, wilting or dark patches. When shopping, you’ll find radicchio in two forms: Veneto and Treviso. The former comes in a loose ball form with rich burgundy leaves with bright white ribs and veins. The latter, which comes from the town of Treviso in Veneto, is tighter and has a tapered head, making the leaves narrow and pointier as well (like its close relative, endive). Some examples of Treviso radicchio look like curly fingers bunched together, and it is the more exotic-looking of the two.

You can also uncover field-grown radicchio under the monikers Chioggia (key-OH-gah) and Castelfranco, both towns in Veneto. Also, Palla Rossa, Sottomarina and Chiavari (key-ah-VAH-ree), though chances are you won’t often see these in your local market. Castelfranco is the most unusual of the bunch — it’s airy, almost like a flower opening up, and sports a pastel green color with red splotches.

Keep radicchio in the fridge, whole and unwashed. Wrap a damp cloth around the head and store it in a clean bag until ready to use. Super-fresh radicchio can last a week this way, though it’s best used at the peak of crispness. 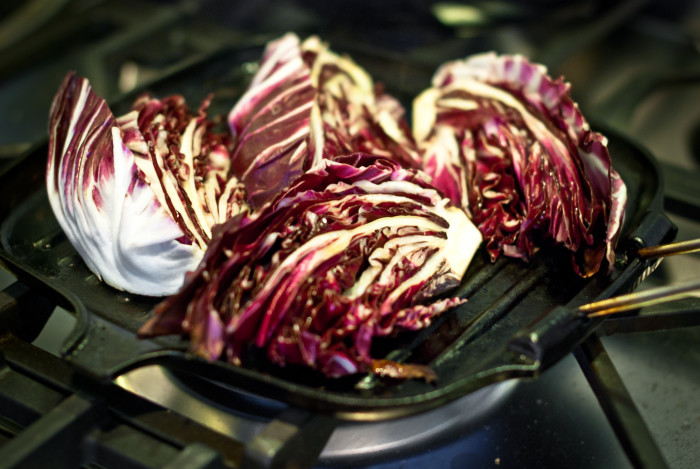 It may surprise you to learn radicchio is not a lettuce but actually falls into the dandelion family on the chicory side. This perennial herbaceous plant offers the familiar peppery taste found in common chicory, but with a bright red hue and cup-like leaves perfect for filling with delicious what-have-yous.

“I love the bitterness and how it allows me to incorporate different flavors,” says chef Rob Weland of Garrison in Washington D.C. At his New American restaurant, the chef uses radicchio in a gratin made with butter, sugar, fennel, bread crumbs and Parmesan. He likes cooking the leaves, which allows the plant to soften up and helps sweeter notes come out, he says. He also grills it to serve with seafood and spins fresh leaves into a bright salad singing with citrus.

In Italy, you will find this vegetable not only in a salad, but jazzing up soup, stirred into risotto and atop pizza. Slicing a whole head of radicchio, coating it with olive oil and salt and grilling is also a popular preparation and an excellent addition to any barbecue. Try filling the leaves with a funky blue cheese and walnut mix to make an easy finger food, or give your coleslaw a winter kick by shredding some crisp radicchio in.