Some call it the Heartland. We call it Hearty Eating Country. As the new year approaches, we’ve asked some of our writers to share their most memorable meals in the Midwest and Southwest in 2015. Here are their picks: 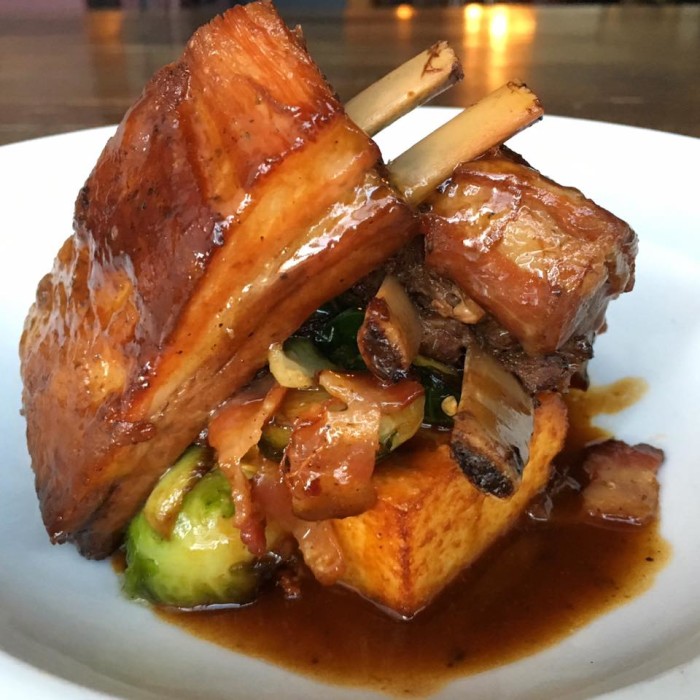 Osteria Langhe (Chicago, Illinois)
Restaurateur Aldo Zaninotto may be of Belgian descent, and chef Cameron Grant may be of Scottish descent, but the two share one big trait: a love for all things Piedmont. As such, their restaurant in Chicago’s Logan Square showcases the regional fare well — really well. If you aren’t famished upon entry, you will be soon enough, thanks to an aperitif list of more than 20 offerings curated by Zaninotto. On a recent night, we couldn’t pass up the plin, a house favorite and traditional Piemontese pasta dish of hand-pinched ravioli, Parmesan, thyme and butter (we’re guessing lots of it, and we’re OK with it). The duck, pan roasted with cocoa-dusted foie gras, caramel apples and parsnip puree, was one of the best dishes I’d tasted in months. 2824 W. Armitage Ave., Chicago, IL 60647; osterialanghe.com
—Nicole Schnitzler

Butcher and the Brewer (Cleveland, Ohio)
You know that rather awkward chunk of time that happens in between a wedding ceremony and the reception, when the party takes photos and the rest of the guests take down a few drinks? I encountered the happy hour–cued holding pattern most recently in Cleveland, where we found ourselves on East Fourth Street at 4 p.m. — too early for a seat at spots like Lola and Greenhouse Tavern, but right on the dot for this brewpub to open its doors. It’s best known for its two namesake offerings; all of the meat is pasture-raised and free of antibiotics or hormones, and nearly two dozen beers are made in house. Naturally, we tried a little of each. Meat and cheese plates with spicy chicken rillettes, duck summer sausage, Humbolt fog and aged gouda were quickly devoured, so we continued on with bacon-wrapped dates and a couple of the mushroom flatbreads, with shiitakes, goat cheese and leeks. We knew it had passed the test when we sauntered back in post-reception for round two. 2043 E. 4th St., Cleveland, OH 44115; butcherandthebrewer.com
—Nicole Schnitzler

Olamaie (Austin, Texas)
Olamaie was my top Austin (and a top Texas) meal as I road-tripped across Texas this year. The talented chef duo of Michael Fojtasek and Grae Nonas were rightly among Food & Wine’s 10 best new chefs for 2015, with the restaurant just opening in fall 2014. It’s elevated Southern food, in keeping with the great modern Southern-style restaurants, like Edward Lee’s Milkwood and 610 Magnolia in Louisville, or Husk in Charleston and Nashville: revering Southern cuisine while also reinventing it. Inside an elegant, white Southern-style home, the dining room is a bit tightly packed, but service is seamless and the wine list strong. The restaurant’s version of traditional Hoppin’ John includes zipper peas and pole beans soaking in a marinated soft egg, while the smoky tuna dip is layered with burnt eggplant, chow chow and Alabama white sauce. And the famed off-menu biscuits are indeed worth the hype. 1610 San Antonio St., Austin, TX 78701; olamaieaustin.com
—Virginia Miller

Town Topic (Kansas City, Missouri)
In September, I made my way to Kansas City to support my partner — he was competing in the world’s biggest barbecue competition, the American Royal — and to find out if the burger at Town Topic in his hometown was really that good. Like a lot of my favorite fast food joints, this place was busted. (The bathroom didn’t even have a sink, just a hand sanitizer dispenser.) But once I sat down down at the counter and laid eyes on the menu — a single burger costs $2.75 — and flat top seasoned by decades of grease, I didn’t care. I ordered a double burger with onions, onion rings, and a soda. The onions were first grilled, then pressed into the thin patties to continue cooking with the meat. The frozen onion rings went straight from a plastic bag into the oil, and there were no surprises with the fountain drink. My lunch cost under $11, and it was everything my man promised. 2021 Broadway St., Kansas City, MO 64108, 816-842-2298; towntopic.com
—Katie Chang

Sepia (Chicago, Illinois)
After two years of spinning out modern French plates at NoMI, Andrew Zimmerman shifted his focus to globally inspired American fare at this Michelin-starred spot in Chicago’s West Loop. A recent trip back to the former print shop (hence the name) reminded me of his dedication to all things seasonal and local — a fact also evidenced by his routine participation in Green City Market events. Here, even cauliflower gets a fresh face: It’s pan-fried with tempered black mustard seeds for flavor and color. There’s no question that every forthcoming visit will also require a foie gras royale, with sour cherry and hazelnuts. 123 N. Jefferson St., Chicago, IL 60661; sepiachicago.com
—Nicole Schnitzler

The Grove (Austin, Texas)
There are a few locations of this wine bar throughout Austin, but the original spot is in the city’s West Lake Hills neighborhood. We headed straight for the patio, bustling with reservations and brightly illuminated by dangling lantern lighting. We discovered pretty quickly that it’s a people-pleasing kind of spot, in a good way. This place is big on options, starting with the wine list: 10 different flights welcomed us, each one encompassing three six-ounce pours that fit a certain theme, from sparkling to modern Italian reds. One glance at the abundance of food options, ranging from starters and small plates to sandwiches and pizza, proved that the menu follows suit. Portions are huge, as well. Generous plates of pan-seared salmon and steak salad had us leaving without dessert — but not first without a handful of those packaged pastel mints, which, yes, I do enjoy every once in a long while. 6317 Bee Caves Rd., Austin, TX 78746; grovewinebar.com
—Nicole Schnitzler

Embeya (Chicago, Illinois)
We knew walking into this West Loop corner spot that we’d be in for a memorable dinner. After all, the kitchen is now helmed by Mike Sheerin, who’s gained a solid reputation throughout the city from his four years at Blackbird. Black sesame rice crisps veil two generous mounds of salmon tartare, delicious on its own with sesame seeds and shallots, but better with the textural interplay. Bites of seared Ahi tuna pack surprising heat, a somewhat confounding turn of events — until you realize it’s coming from the Thai chili–dressed beets. A lemongrass-tomato seafood stew arrives with heaps of prawns, scallops and halibut and is available for parties of one or two. You won’t regret opting for the latter, unless, of course, you don’t save room for dessert. Meal cappers from pastry chef Meredith Pewitt, like the Thai coffee ice cream with a (rather ethereal) fudge cake, is not to be missed. 564 W. Randolph St., Chicago, IL 60661; embeya.com
—Nicole Schnitzler